'Zero Omnibus' big in every sense of the word

DC Comics shipped something big just before the holidays. So big, it might take you two hands to lift it. The New 52 Zero Omnibus ($150) collects 55 comics DC published beginning last September, all of which were numbered “zero” and chronologically preceded the first issues of DC’s line-wide re-launch in September 2011. It includes zero issues for titles that have already been canceled, as well as for some new titles that have replaced them.

Got all that? Seriously, what that means is the comics collected here tell us what happened before we were introduced to the new version of DC’s superhero universe in 2011, now generally referred to as “The New 52.” Many of these comics are origin stories, while others are general background that led to this character or that. And while there’s an occasional clunker (or the story of a character I don’t care for), most are top-flight superhero stories by the company that has perfected superhero stories since it debuted Superman, Batman and Wonder Woman more than seven decades ago. There’s also fantasy, science fiction, war stories and even a Western!

Naturally, many will balk at the $150 price tag, which is a pretty serious number. But so are 55 (the number of comic books this hardback collects); 1,344 (the number of pages it contains) and eight (the number of pounds it weighs). And the number of characters – from Aquaman to Zatanna, and everyone in between – makes it priceless. 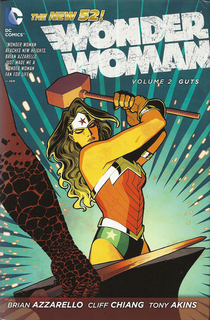 Divine Right: Speaking of the Amazing Amazon, writer Brian Azzarello continues his terrific turn on Wonder Woman after he revealed that she is the daughter of Zeus in the first WW collection, Blood. Now, Wonder Woman Volume 2: Guts ($22.99) continues Diana’s exploration of the new, true history of Paradise Island (it isn’t pretty) and her complicated relationships with her newly discovered family: the Greek gods.

Now, maybe it’s because I was never happy with Wonder Woman’s original origin story, and because I devoured Bullfinch and Edith Hamilton as a lad, but I love this new take. Diana is now a true warrior, and she is drawn like one – still beautiful, but no cheesecake pin-up. And she has moved up the status scale to Hercules and Thor territory, by being a demi-god instead of a clay statue brought to life by goddesses (which always seemed hokey). Plus, Azzarello is noted for his gift with crime noir, and he is at his best with the Greek gods, which he calls “the original crime family.”

With Azzarello exploring the nature of gods and Amazons, and artist Cliff Chiang contributing bizarre but entirely appropriate new designs for Hermes, Apollo, Hephaestus and the rest, Wonder Woman provides a different, amazing revelation with each turn of the page. Guts is all of that, plus a satisfying story about love, friendship and betrayal.

Finally, the best-known and most iconic superheroine is living up to her potential. And, wouldn’t you know it, she’s almost divine.

Star Power: My wife and I are big fans of Neil deGrasse Tyson, an astrophysicist, author, science-show host, frequent TV show guest and director of the Hayden Planetarium at the American Museum of Natural History. It turns out that, despite Tyson being a brilliant scientist and me being a less-than-brilliant columnist, we have something in common: We both love Superman.

In a back-up story in Superman #14, which shipped in November, Tyson located Krypton’s solar system. Yep, Tyson appears in the comic book! And there he does what he does best: science. Using all the (entirely imaginary) information from decades of Superman stories, he locates a star for the Man of Steel’s home planet that meets all the criteria. The red dwarf star LHS 2520, located in the constellation Corvus, is 27.1 light years from Earth – virtually a neighbor in astrophysical terms – and can be found in the night sky with the right coordinates (detailed in the comic book).

“As a native of Metropolis, I was delighted to help Superman, who has done so much for my city over the years,” Tyson said in a press release, in reference to New York, the model for Superman’s city. “And it’s clear that if he weren’t a superhero, he would have made quite an astrophysicist.” 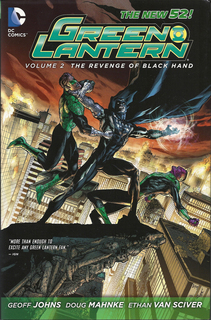 In Brightest Day: DC’s Chief Creative Officer Geoff Johns continues his reinvention of Green Lantern as, essentially, a horror title, as exhibited in the latest collection. In Green Lantern Volume 2: The Revenge of Black Hand ($24.99), our hero and his once-greatest adversary, Sinestro, battle zombies; get buried alive; and are tortured, imprisoned and brainwashed. “Green Lantern” started in the 1960s as a science fiction title, but Johns has figured out that the most dramatic use of a character based on light is for him to face the darkest fears of our imagination.

More Powerful than a Locomotive: For those who predicted the Superman-Wonder Woman liaison that began last August would be short-lived, the super-couple are still together. The pair shared a kiss in Justice League #12 five months ago, and recent issues have seen them dining and canoodling in Metropolis restaurants. Lois Lane was unavailable for comment.