Aug. 4, 2009 -- If you crossed To Kill a Mockingbird with Alice in Wonderland, what you’d get is something similar to the remarkable graphic novel Bayou ($14.99).

Bayou follows Lee Wagstaff, a little black girl in 1930s Charon, Mississippi. The Magnolia State in this era is not only a land of Jim Crow and lynchings, but also one of swamp monsters and bayou fairies that only Lee can see. This odd mixture of the brutal and the fantastic make a vibrant backdrop to Lee’s adventures, which are themselves a mixture of peril in worlds both mysterious and mundane. 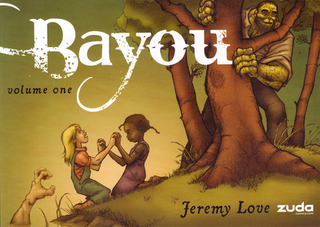 For example, her white friend Lily is swallowed by a swamp monster named Cotton-Eyed Joe – for which her father is blamed, beaten and arrested. A noose seems inevitable. Lee’s solution is to rescue her friend from the swamp and exonerate her father, which results in an encounter with a golliwog (which looks like a minstrel in blackface and lives underwater), an alliance with Bayou (a big, and big-hearted, swamp denizen), glimpses of a pixie named Emmet (Till, anyone?), and conflict with the spirit of Civil War General Bog (the “Bossman,” who can take the shape of a flight of Jim Crows), and his minions, all named for famous confederates, including dog-faced Jubal (Early) Bloodhound, horned Nathan (Bedford Forrest) and white-hooded Jefferson (Davis).

All of this is captured in writer/artist Jeremy Love’s delightful, expressive art. Like his story it is of two worlds – at times cartoony and at other times realistic – but it’s all in service to the story, which is told clearly and smoothly.
And it’s heady stuff, sure to be controversial, especially in my native South. But if we Southerners are proud of our culture, as we claim to be, we have to embrace all of it – the bad as well as the good.

My only complaint is that it’s not a complete story. Still, that just means more of Lee’s adventures in future volumes. Or we can visit Zudacomics.com, DC’s online webcomics competition site. Bayou is the first Zuda submission to move from pixels to print, and we can only hope for similar quality in future.

Castle writer Scott Allie described him in an interview as “a cold, driven man with little emotional life, and a desire to do good, but violence is all he’s good at.” So, yes, he’s immune to the persuasions of women, doesn’t drink or swear and isn’t much of a conversationalist. But that just means he’s undistracted from his lupine joy in battle, which, of course, he believes is all in service to the Lord. He’s a disturbing fellow, this Solomon Kane.

Which is captured in this graphic novel, fleshed out from nothing more than a few opening paragraphs in Howard’s notes. There are demons, there are religious conflicts, there is temptation denied and there is joie de combat. Sounds like Solomon Kane to me.

* Harvey Classic Comics Vol. 5: The Harvey Girls (Dark Horse, $19.95): This collection of 110 children’s stories from 1952-62 is really charming, but I suspect they are too politically incorrect for today’s audience.

Harvey was king of kids’ comics from the ‘40s to the ‘60s, with such characters as Richie Rich and Casper the Friendly Ghost, mostly written and rendered by veterans of animation studios. These guys really knew how to tell a story, and to tell it quick!

And credit where it’s due: Their female characters were ahead of their time in being spunky, resourceful and adventurous. Little Dot, Little Audrey and Little Lotta never shied from trouble, and always solved the problem of the day.

On the other hand, though, most of the humor surrounding Little Lotta had to do with her weight, which is now a no-no. And all of them had to circumvent the patriarchal restrictions placed on them as girls, restrictions which are much reduced today and might even confuse young readers.

But are we really so PC that we can’t enjoy these tales? I hope not, because today’s girls could do worse for role models.

And now that I think of it, if it wasn’t for the Harvey girls, we might never have had a Lee Wagstaff. That’s a family tree to be proud of.

Comment by Chris Fluit on August 7, 2009 at 4:57pm
I read the first several chapters of Bayou when they first came out. Good stuff.

Comment by Mark Sullivan (Vertiginous Mod) on August 7, 2009 at 6:49pm
I enjoyed Bayou as well; my review of it appeared in last month's "Mr. Vertigo Review Again." I did think the print collection was pricey, though, considering the size of it.

Comment by Travis Herrick (Modular Mod) on August 7, 2009 at 6:58pm
I really liked that Solomon Kane story. Your description of it is perfect, and I thought the art fit in really well.

Comment by Joan Carr on August 10, 2009 at 4:03pm
This review makes me want to read Bayou! I guess it's to be expected that all the bad guys are famous Confederate generals or soldiers. But it's important to remember that some Southerners who fought in the Civil War were ambivalent about or even opposed to slavery. Many thought they were fighting to defend their families and homeland, rather than slavery. Also, I think it's unfortunate that literature and movies have demonized Bloodhounds. Bloodhounds are still used as search and rescue and cadaver dogs. While they are big, they are noted for their gentleness and are said to make good family pets, although they drool A LOT. These tracking dogs were hated and feared by escaped slaves not because of their viciousness, but because of their uncanny ability to lead their masters to their quarry. Escaped slaves had much more to fear from the men on the other end of the leash than the Bloodhound itself. Once it's found it's quarry, a Bloodhound barks a lot in excitement and is more likely to drool all over the person than attack him. The human bounty hunters, however, acted with much more inhumane savagery than the dogs. It's sad that the writers of Bayou are perpetuating this misunderstanding about a very remarkable breed of dog that had the misfortune of being used by evil people to commit heinous acts against other people. It's man's inhumanity to man that's the issue. Leave the poor dogs out of it.
Here's a fun Bloodhound fact: The Bloodhound is the only animal whose evidence is admissible in an American court of law.

Comment by Joan Carr on August 11, 2009 at 10:24am
OMG, that was a funny movie! The hillbilly bloodhound owner was pretty funny, although kind of an insulting stereotype...