'47 Ronin' differs from legend, but still a great story

Yes, Virginia, there is a real “47 Ronin” story. But it isn’t exactly the same one in the movie that premiered Dec. 25!

Which isn’t to say that film, starring Keanu Reeves, is a bad thing. Actually, it looks fantastic – in both senses of the word. In the movie, set in Edo-era Japan (1603-1867), an evil warlord frames the master of 47 samurai, and that master must then commit ritual suicide. Those warriors then become “ronin,” masterless samurai. The title ronin is a mark of shame, as it implies these warriors failed to protect their master, which is a samurai’s chief duty. A samurai has honor and all the respect that comes with it; a ronin does not, even though their physical skills and training are identical.

Further, these ronin are now homeless, and disperse across the land in a shameful diaspora. They vow vengeance, though, and seek the help of Kai, a half-breed they’d previously rejected (Keanu Reeves).

OK, let’s back up right there, as you may be asking what the heck a white actor is doing in a movie set in homogeneous, xenophobic, isolationist, feudal Japan. And the answer is simple: American audiences tend to avoid movies that don’t star recognizable American movie stars. So if a big-budget movie doesn’t have a role for an American movie star, the script will invent one, in order to sell tickets in the U.S., still the biggest movie market. It’s not pretty, but it’s true, as movie-makers are businessmen, not social scientists. 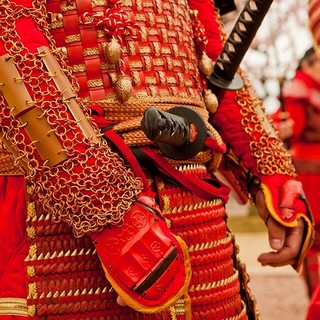 But, you know, if you’re going to insert a major American movie star in a Japanese movie, I have to say Reeves is a pretty good choice. He is partly of Hawaiian descent, so his vaguely exotic looks are vaguely convincing as a Japanese-Western hybrid. Some would also suggest his acting style lends itself well to a role as a stoic, emotionless samurai, but I wouldn’t dream of going there.

Meanwhile, back at the movie, Kai leads the 47 ronin (or are they 48 now?) in a cross-country battle against all sorts of fantastic threats, such as mythical beasts, shapeshifting witches and other spectacular threats.

That sort of special-effects extravaganza is exactly what Hollywood does better than anyone else in the world. Which makes for a very good movie – just not one the same one Japanese kids have been reading for generations.

That story is one of Japan’s most important and legendary events. It’s the sort of story that is imbedded in a culture’s DNA, explaining who and what they are. It’s like the Western in America, for example. 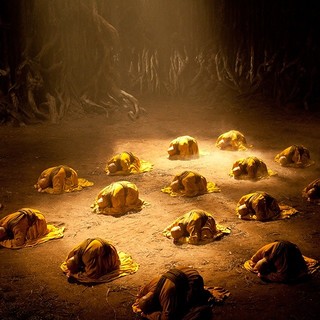 In the historical tale, Lord Asano is driven by insults to attack a rude member of the emperor’s staff. This is an unforgiveable sin, and the lord is asked to commit seppuku – the ritual self-execution sometimes referred to as hari-kiri. The death of their master means Asano’s 47 samurai are ronin, who are now without honor or a home, once the emperor confiscates all of the dead lord’s lands. Even more galling, the man who insulted Asano is still alive, and receives no punishment whatsoever.

Vowing revenge, the 47 spend two years insinuating themselves in Edo (the capital of Japan at the time) and in the emperor’s household. The leader of the ronin, who is being watched, commits the ultimate act of self-abasement to continue the charade, pretending to be a drunk who whores around Edo and sleeps in the gutter. Now, that’s commitment!

I don’t think I need a spoiler alert to say that the ronin succeed. After two years, the rude guy finally relaxes his guard, and the ronin attack and kill him. Then – and this explains a lot about Japan – they all commit seppuku.

Why? Because that’s the only honorable end for all this! The bushido code, which is what distinguishes a samurai from lesser people, is one of honor, loyalty, sacrifice, duty and persistence. The 47 ronin exemplified all these traits in spades, but their plan would still just be simple murder if they had failed to put the exclamation point on the end. That final act, the ultimate expression of self-sacrifice, is what distinguishes an honor killing from simple revenge.

In other words, by dying they retain honor. Had they remained alive, it would have been without honor. And honor, obviously, was more important to them than life.

If you want to read the story for yourself, The 47 Ronin: A Graphic Novel ($14.95, Shambhala), adapted by writer Sean Michael Wilson and artist Akiko Shimojima, was released in November. Or you can wait until February, when Dark Horse will publish a hardback version by DH Publisher Mike Richardson and artist Stan Sakai. As comics fans know, Sakai has been blowing away audiences for years as the writer/artist of his unlikely but terrific samurai epic Usagi Yojimbo, which features anthropomorphic (but not funny) animals.

With either book, you can enjoy a little insight into Japanese culture, along with an absorbing story. Or you can simply munch popcorn and watch the movie, which is a similar story but amped up almost beyond recognition. Either way, it’s win-win!

I was initially interested in seeing this movie, but it is so divergent from the source material I almost immediately disappeared. If they had called it something else I might have gone to see it. It maybe great, but I just can't see me parting with my money to go watch. Now if I catch it for free...maybe

This would be like if I made a movie called "John Henry" with a white guy drilling for oil in West Texas, and then his heart explodes after fighting a den of demons.

The comics are good though. That I can recommend.

Hara-kiri (not hari-kari, though that is how many Americans pronounce it) and seppuku both essentially mean the same thing: "belly-slitting".  Hara-kiri is considered somewhat vulgar, seppuku is the more formal of the two terms.  Being allowed to commit seppuku was in a weird way a mark of respect. It meant that the samurai in question was considered to have honor to redemm. Common criminals and samurai who were considered to have irremediably dishonored themselves were summarily beheaded.

Edo is simply the old name of the city we know today as "Tokyo".  To this day, people whose families have lived in Tokyo for centuries are known as edokko.   Technically it was not the capital of the country at the time of the story, Kyoto was the formal capital. Edo was, however, the seat of the bakufu, which means "office in the tent" and was the name used for the Tokugawa shogunate, in much the same way that an  American might say "the White House" when refrring to the U.S. President or his administration.    There have been numberless versions of this story in every conceivable media - one good film version is Chushingura: Hana no Maki, Yuki no Maki (1962), featuring the great Toshiro Mifune,

As for the movie, I won't be seeing it. I find it ineffably lame (and somewhat racist) when producers feel a need to insert "western" characters into other cultures' legends where they weren't originally present.

It does seem to echo the imagery of The Lord of the Rings and 300. I think I saw Gollum in the trailer!

I always assume some liberties when properties move from one medium to another. I can see The Baron's point -- I mentioned it in the column -- but if the lack of Keanu Reeves means the movie isn't going to be made, then I can tolerate Keanu Reeves.

And some of the changes are improvements, at least to the Western audience (for which it is intended). There's a lengthy prologue to where the samurai become ronin that was a bit boring and slow -- and somewhat baffling to Western eyes. In it, two lords -- one of which is Asano, the lord whose seppuku disenfranchised the ronin of the title -- go to Edo for some sort of court instruction (I was never clear on what). Their instructor is a bully, who forces the lords to tie his shoelaces and admit to non-existent character flaws and attend him like a servant. The other lord wants to attack the instructor, but Asano talks him out of it. But later, it is Asano who snaps and attacks the instructor.

It is that attack -- inexplicable given events to that point -- that is Asano's crime, for which he must commit seppuku. And he was fully aware of the result his actions would have on Accu (where he is lord), because when talking the other lord out of attacking the instructor, he points out that a dishonored lord's lands would be confiscated, his family would be homeless and his samurai would all become ronin. So he knew the consequences, and did it anyway. And didn't even hurt the guy! It was all very mysterious to me ... and about a third of the book!

The movie dropped all that and arranged another way for the lord to be dishonored where it wasn't his fault, where his suppuku was true self-sacrifice (because he was literally falling on his sword to maintain honor for his family, even though he knew it wasn't his fault) and where the ronin's rage was doubly righteous.

Many of the events involved witchcraft, where a kitsume was working for the bad guy and doing terrible things to the good guys. The special effects -- she turns into a dragon at one point -- are very, very good. As is the cinematography in general, as it shows us all kinds of different Japanese landscapes, from blasted volcanic turf to sunset in the woods, beautifully.

It all worked for me. I don't doubt there's a more accurate 47 Ronin to be made (if it hasn't been already). But for what this was, it was done well.

I understand where you are coming from Cap, but I am in the group that won't be seeing it. Had they named it something else, I might have, but I would probably spend more time nitpicking the movie instead of enjoying it. I strongly recommend the Dark Horse version by Mike Richardson and Stan Sakai. It was very well done.

There's a hardback of the Richardson/Sakai version coming in February, and I'll be getting that.

JD DeLuzio replied to Steve W's discussion A Cover a Day
"I don't think anyone has posted this one. It was my introduction to Strangers in Paradise and…"
3 minutes ago

ClarkKent_DC replied to Commander Benson's discussion Deck Log Entry # 240 An Empty Chair
"A wonderfully eloquent epitaph. My deepest condolences to you, Commander, and to Cheryl."
54 minutes ago

Mark Sullivan (Vertiginous Mod) replied to Commander Benson's discussion Deck Log Entry # 240 An Empty Chair
"Such heartbreaking news! I am sorry for the family's grief. But you wrote about it beautifully…"
1 hour ago

Eric L. Sofer replied to Commander Benson's discussion Deck Log Entry # 240 An Empty Chair
"Commander, I hope that the sorrow passes quickly, to be replaced by the love and honor and warm…"
2 hours ago

Philip Portelli replied to Commander Benson's discussion Deck Log Entry # 240 An Empty Chair
"My sincerest condolences to you, your wife and family, Commander. Be strong and remember the love.…"
2 hours ago

doc photo replied to Commander Benson's discussion Deck Log Entry # 240 An Empty Chair
"My condolences to you and Cheryl. I can't imagine the grief that comes with the loss of a…"
2 hours ago

Wynd Book 2: The Secret of the Wings

Lee Houston, Junior replied to Steve W's discussion A Cover a Day
"There is something fascinating about good magic acts. Unfortunately, this might not be one of…"
3 hours ago

Peter Wrexham replied to Steve W's discussion A Cover a Day
"It's getting near the end of the month, and I still have a fair number of classroom scenes in…"
3 hours ago