I acquired a complete run of Fantasy Masterpieces as backissues. The titles changed to Marvel Super-Heroes with #12. (I always liked these two covers in conjunction.) As I mentioned yesterday, my first issue of Marvel Super-Heroes was #38, which was equivalent to Tales to Astonish #83 (which became Hulk with #102). I knew that Tales to Astonish/Marvel Super-Heroes would eventually become Incredible Hulk (from George Olshevsky's index series), and my initial plan had been to continue to buy MSH until it reprinted Hulk #166, because I started buying Hulk with #167. By the time Marvel got to MSH #56 (which reprinted Hulk #102) however, I had already accumulated a run of Hulk (as backissue) from #102-166. I would have fallen short of my original goal, anyway, because Marvel stopped publishing MSH with #105 (or Hulk #157).

Back in the '60s, Hulk shared Tales to Astonish with Sub-Mariner, and the cover spot was shared with alternating issues. By the '70s, though, Hulk was the draw, and the Subby covers were given over to newly-commissioned Hulk covers. Below is a memorable one by then-up-and-comer Jim Starlin. Even when I replaced my old MSH reprints with TTA originals, I hung on to MSH #47 just because I liked the cover so much. One year, shortly after moving to Texas, we gave out comic books rather than candy at Hallowe'en. I had a stack of Gladstone EC reprints (which I no longer needed because I replaced them with Gemstone ones) that I gave out to the older kids. For younger kids, I had a stack of "funny animal" titles. Then this one little kid wearing a Hulk mask and "Hulk Hands" came to the door. He was so cute, I gave him my copy of MSH #47. Issue 5 from me. Published in 1950 and edited by Stan Lee, the cover artist was Gene Colan. I love the body positions of both the woman and the monster. 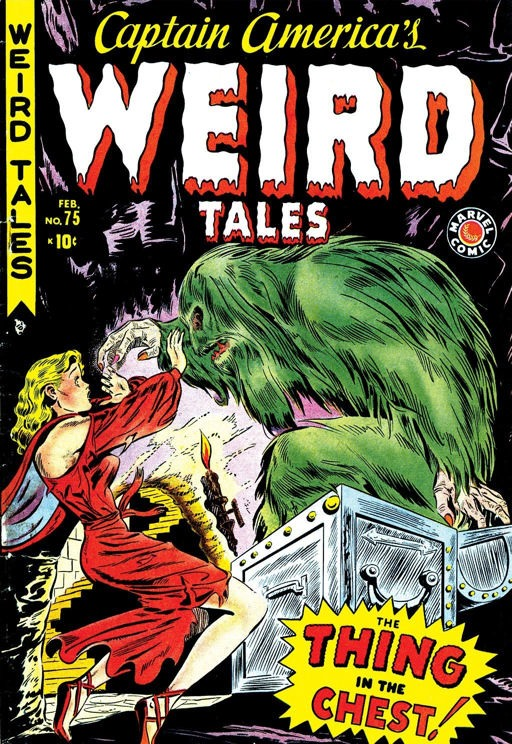 As I mentioned a few days ago, JLA #25 initially confused me by featuring a character whom I recognised as Giant Man, but calling him "The Flash".  Both had red costumes with similarly-shaped masks incorporating antennae or earpieces, so my mistake is perhaps understandable.

Still, I eventually got the two of them sorted out, and started buying The Flash's own comics.  This isn't the earliest that I own, but it's one I'm very fond of.  It introduced me to the Weather Wizard, who was always one of my favourite Flash foes.  Powerful enough to be a credible threat without being as overwhelming as villains like Mirror Master or Grodd.  It also has a great cover by Carmine Infantino and Murphy Anderson, simple but beautiful. 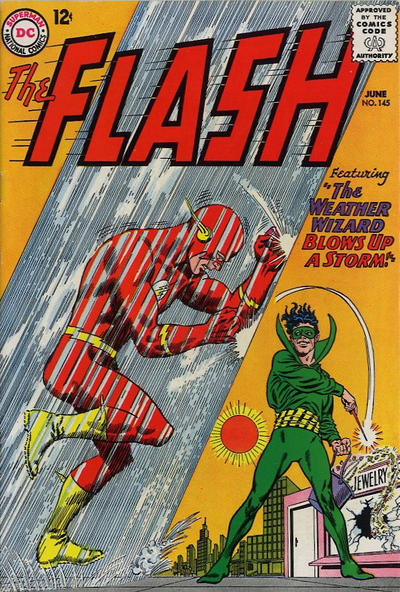 This issue isn't any kind of a "first"; I have just always liked this cover (another Colan). I'll get to my own reprint memories later but since this seems to be Gene Colan Day...

The concept of a mini (limited) series was still relatively new before DC's Crisis On Infinite Earths.

While I had read The World of Krypton, The Batman's Untold Story mini (forget the actual title) and a few others before then, Nathaniel Dusk caught my eye in my first regular (Direct) Comic Book Store.

A hard boiled private eye set in the 1930s and the entire series shot only from Colan's pencil art? What wasn't there to love?

Colan was no doubt a great artist on the right series. Who the right inker for him should have been is a matter of debate, but he was certainly in his element with Dusk.

In hindsight, DC seemed in a rush to get a lot of stuff out before the end of Crisis (more on that later) hence Dusk II coming out within months of the first mini's conclusion with each issue being double size, compared to regular story length for the original outing. But why the character never got another appearance anywhere (that I know of) is beyond me. 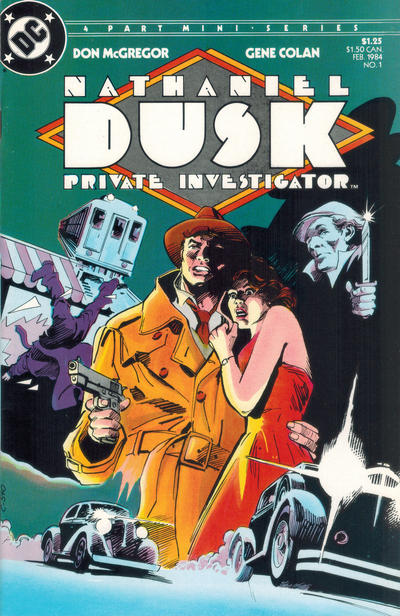 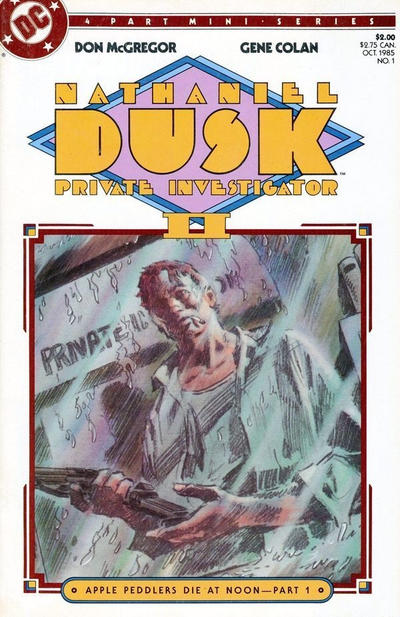 These 8 issues are both highly prized in my collection and highly recommended!

Why they've never been collected either (to my knowledge) is beyond me also.

Gene Colan Day, you say? Here's one of my favorite covers by him when he pretended his name was Adam Austin. 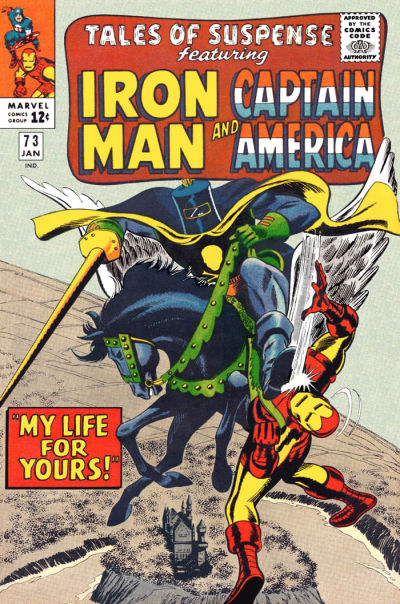 Also notable as the last appearance of the villainous Black Knight before the name was assumed by a hero.

"Why [Nathanial Dusk] never got another appearance anywhere (that I know of) is beyond me."

After "Lovers Die at Dusk" and "Apple Peddlers Die at Noon," a third series, "Hookers Die at Midnight," was in the works, but the difficulties of producing legible published pages from un-inked art at that time squelched the project after only two mini-series. As best as I can recall, my introduction to Colan was this tale of the Crusher: 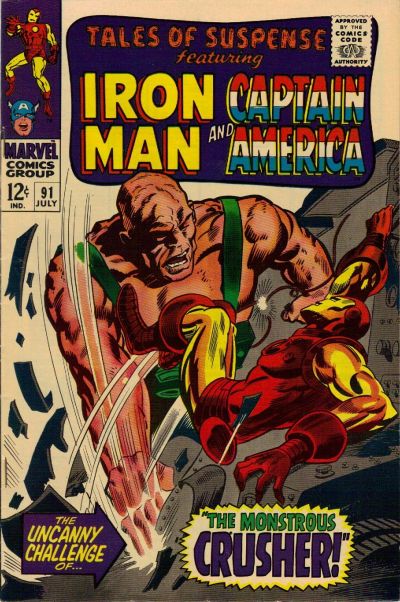 Unfortunately, I'm not sure how I came to read it.  I was too young to have read this issue in '67.  Most likely, it was the Marvel Double Feature reprint in '73.  In any event, I remember thinking at the time that the art was ugly.  Now I think its gorgeous.

As for my favorite cover ever, I have said may times that it's this one: 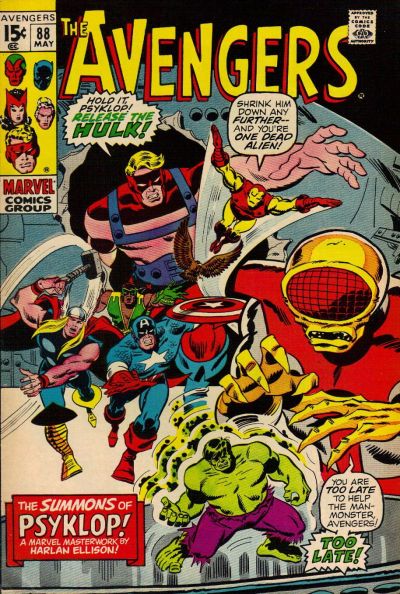 It's not the cover -- although, really, how could you resist pulling that off a spinner rack?  It's the book.  I can still remember reading this story in the back seat of my Dad's car on the way home from Becker's grocery store. Panels from this one are still etched in my brain 50 years later.  It's probably not the first comic I ever read, but I'm pretty sure it's the one that turned me into a lifelong comics reader.

The Twilight Zone featured some of the most memorable Gold Key painted covers: 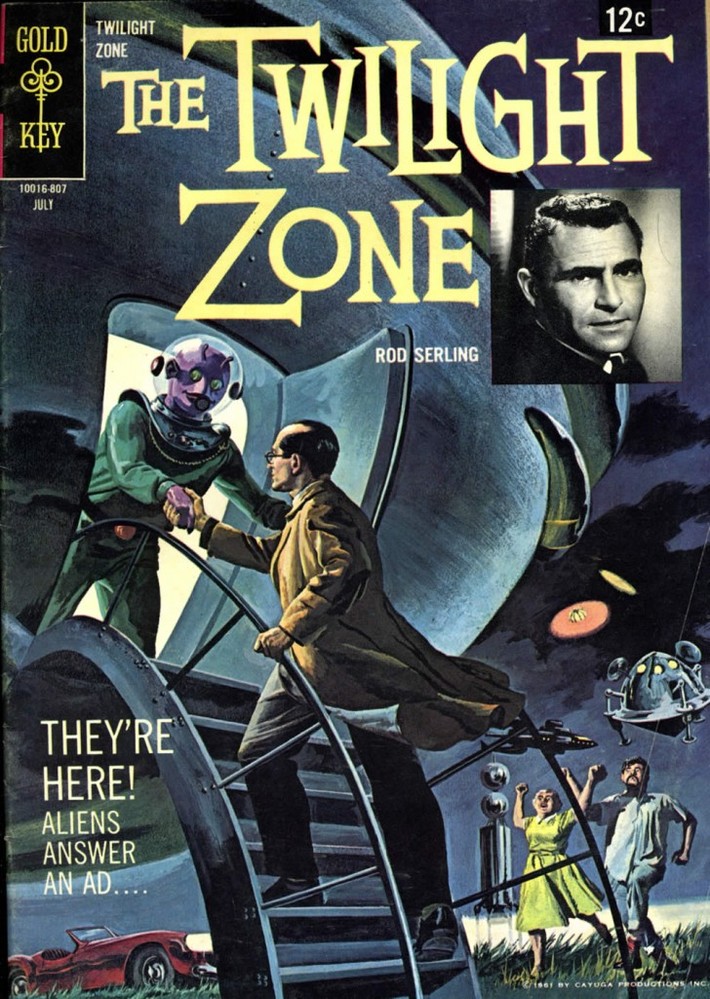 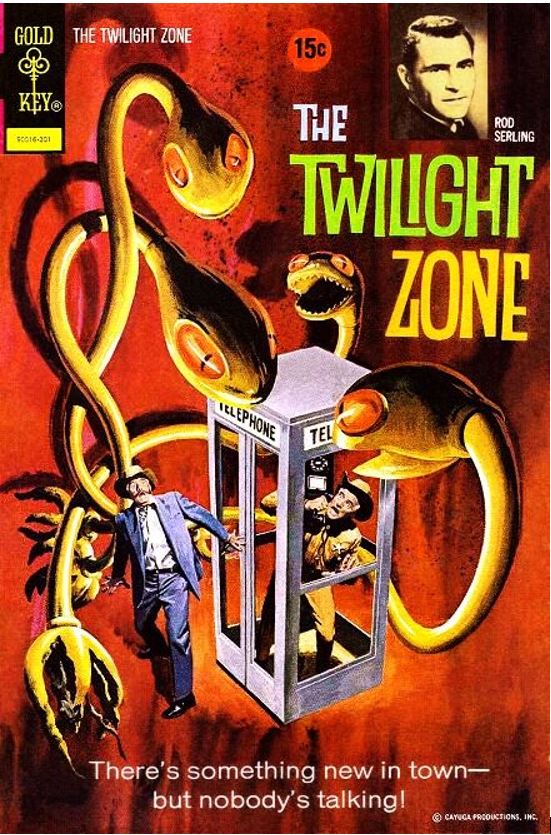 I have multiple copies of this comic simply because I love the cover. I love the story, too, but the cover really did its job in my case.

Of all the books possible, THIS was my first issue of Superman!

Between this, Batman's Killer Brother and the Super-Sons, comic reading went hand-in-hand with therapy! Standing on my head to read this took a lot out of me!

Doctor Hmmm? replied to Cavaliere (moderator emeritus)'s discussion What are you watching right now?
"I started watching this last night. It took me back to being ... I dunno, 13 or 14 and being at a…"
48 minutes ago

Jeff of Earth-J replied to The Baron's discussion How Old Would Comics Characters Be If They Aged Normally? (And What Would They Be Doing Now?)
""I don't if it's ever been addressed how many times Ragnarok has happened, or how…"
1 hour ago

Lee Houston, Junior replied to Steve W's discussion A Cover a Day
"In the long run, even the "Big 2" couldn't contain Neal Adams... (Image courtesy of…"
2 hours ago

Travis Herrick (Modular Mod) replied to Captain Comics's discussion This Week in Comics: May 23-29, 2022
"I freakin' love Westerns. I'm certain I'm an outlier, but I prefer a good Western…"
3 hours ago

Fraser Sherman replied to The Baron's discussion HISTORY OF THE MARVEL UNIVERSE (SPOILERIFFIC!)
"Of all Marvel's veterans, Reed and Ben were the ones who least needed a retcon. It was natural…"
3 hours ago