I vividly recall seeing ads for the Dick Tracy Limited Collector's Edition but never got it until many years later. It reprinted most of the Flattop story. Sadly DC never did a second one.

When the movie came up, the best thing that could be said for it was that it caused many Dick Tracy books to come out! 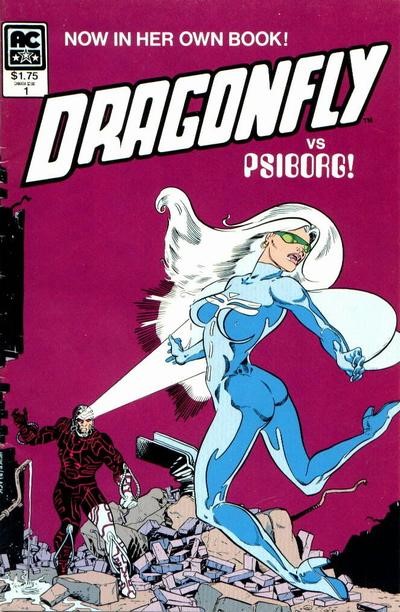 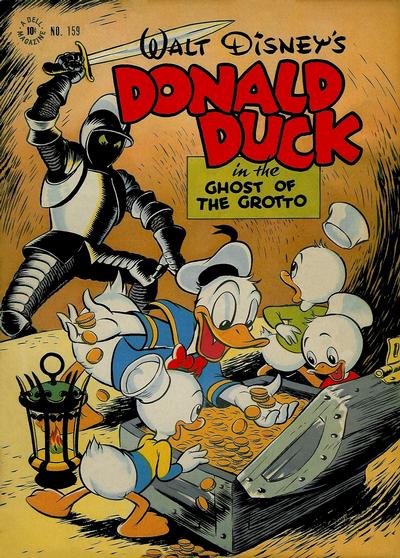 All these hero covers but I don't think we've yet mentioned one of DC's greatest villains - DARKSEID!

Here he is in all his glory. This is from JLA #184, Nov 1980. Drawn by George Pèrez. Can anyone help - was this the very first appearance of Darkseid? 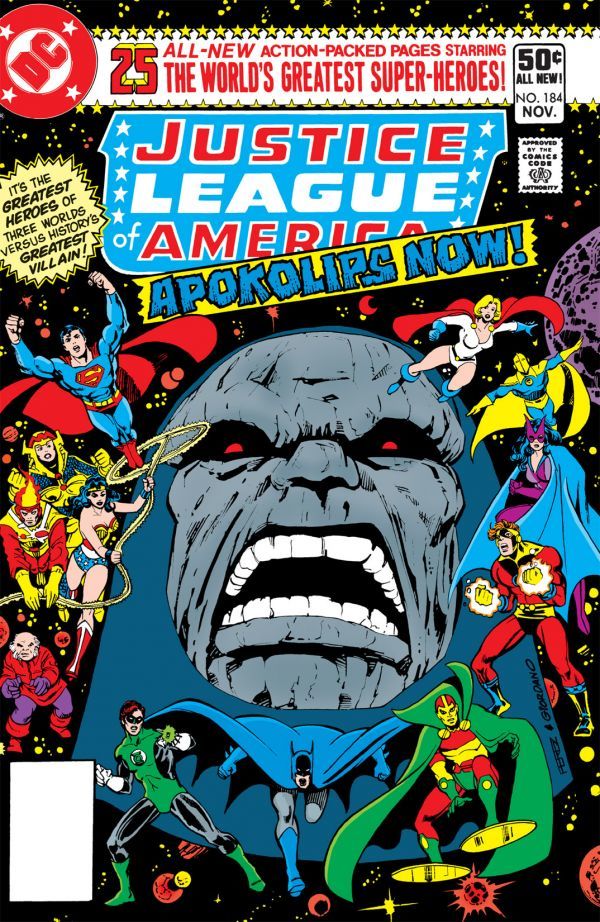 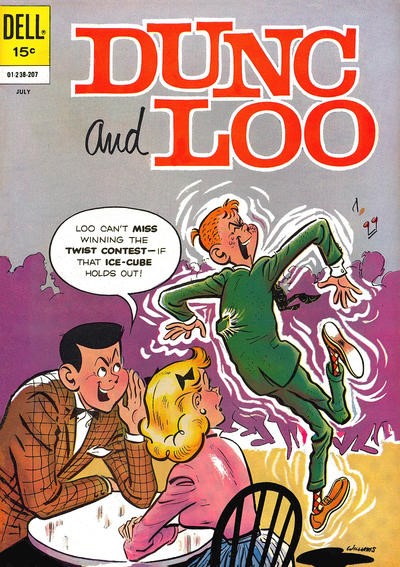 All these hero covers but I don't think we've yet mentioned one of DC's greatest villains - DARKSEID!
Here he is in all his glory. This is from JLA #184, Nov 1980. Drawn by George Pèrez. Can anyone help - was this the very first appearance of Darkseid?

Darkseid appeared in a cameo panel in Superman's Pal Jimmy Olsen #134(DEC70) and made his first full appearance in Forever People #1(FEB71), both from Jack Kirby.

A cool cover from Jerry Robinson. 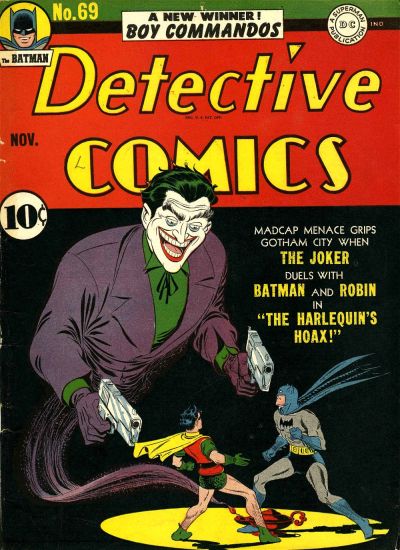 Batman #232 where the Darknight Detective discovered that the beautiful Talia, who he previously met, was, in reality, "The Daughter of the Demon!" That of course being R'as Al Ghul, the Demon's Head!

And Batman's life was never the same again!

The New Gods were connected to Superman. Morgan Edge first appeared in Kirby's first issue of Jimmy Olsen as the evil new owner of the Daily Planet. He was soon being used in Superman's own feature and Lois Lane. Superman also guest-starred in The Forever People #1. In fact, it's more his story than the Forever People's.

While Kirby was doing the New Gods titles elements from them were used in Lois Lane, but not in Superman's own books, aside from Edge. Kirby revealed Edge to be a minion of Apokolips. A Lois Lane storyline introduced the idea that Evil Edge was a Apokolips clone of the real Edge. The storyline culminated in a post-Kirby issue of Jimmy Olsen, #152, in which Evil Edge was killed and the real Edge reclaimed his life. Edge continued as a major character in the Super-books thereafter.

Otherwise, the New Gods elements were mostly dropped. A Newsboy Legion back-up in Jimmy Olsen #150 used Angry Charlie, and a The Superman Family storyline in 1978 was a sequel to Kirby's Project stories. Inter-Gang was used in Superman #297-#298 in 1975-76, but without reference to Apokolips. (In Kirby's stories it was a version of the mob that Apokolips was behind.)

Until Jenette Kahn became DC's publisher the DCU was less integrated than the Marvel U. So after New Gods and The Forever People were cancelled in 1972 the titles' storylines and characters weren't picked up elsewhere. Darkseid made a final appearance in the last issue of Mister Miracle in 1973. Mister Miracle guested in The Brave and the Bold shortly after.

1976 saw the first post-Kirby attempts to revive the New Gods characters. A New Gods try-out appeared in the final issue of 1st Issue Special, Mister Miracle guested in The Brave and the Bold again, and the opening Secret Society of Super-Villains storyline made use of Darkseid, other New Gods villains, and the Black Racer. The storyline climaxed with Darkseid's apparent death in a big explosion.

In 1977-78 DC tried continuations of New Gods and Mister Miracle. During this period the Flash crossed over with the New Gods in Super-Team Family #15, and Mister Miracle appeared a third time in The Brave and the Bold. After the titles were cancelled the New Gods storyline was wound up in Adventure Comics #459-#460, the start of the title's period as an anthology giant. Orion knocked Darkseid into barrier that protects the Source and he began to expand into a giant. Desaad panicked and zapped him with an Apokolips super-gun he had intended to use on New Genesis. In 1979 Mister Miracle appeared (with Inter-Gang) in DC Comics Presents #12.

In the 1970s and pre-Crisis 80s many of the JLA/JSA team-up stories included a third group of heroes. In 1980 Justice League of America #183 commenced a three-parter involving the New Gods. It was the final issue drawn by Dick Dillin. George Perez drew the other two parts because he died. Darkseid was revived, but was destroyed again at the story's end.

Darkseid's next big appearance was the Great Darkness Saga in Legion of Super-Heroes, in 1982. In that story, set in the 30th century, Darkseid can't remember why he's "slept". Legion of Super-Heroes Annual #3 was a sequel. (Darkseid turns one of Lightning Lad's and Saturn Girl's twins into Validus.)

In 1984 DC reprinted Kirby's issues of New Gods in a prestige format. Kirby provided new covers and a new story in the final issue in which Orion travels to Apokolips to confront Darkseid. Kirby ignored the New Gods stories done by others. Since the New Gods weren't being used in other DC titles this didn't affect mainstream DC continuity.

Darkseid was also used in 1984 in the first Super Powers mini, the last issue of which was written and drawn by Kirby. (He was credited as having plotted the preceding issues, but I suspect he just provided ideas or vague outlines. He did do all the covers.) In this Darkseid is a mystery villain until the climax of the penultimate issue. On TV Darkseid appeared in Super-Friends: The Legendary Super-Powers Show in 1984-85.

The climax of Kirby's new New Gods story led into his 1985 graphic novel The Hunger Dogs, in which the people of Apokolips revolt against Darkseid's rule. The second Super Powers mini took this as its starting point. It was drawn by Kirby and credited as written by Paul Kupperberg. (Did he plot? Just script? I don't know.) This ended with Darkseid's betrayal by Desaad and apparent destruction.(1)

Darkseid's final appearance before DC's continuity restart was in the final issue of Crisis on Infinite Earths, where he helps destroy the Anti-Monitor. The issue depicts him as still ruling Apokolips, ignoring The Hunger Dogs.

DC's next line-wide crossover was Legends in 1986-87, in which Darkseid was the principal villain (working through Glorious Godfrey). In the Superman crossover issues he brought Superman to Apokolips. Superman spent part of the story brainwashed. This brought Darkseid and Apokolips into the new DCU. The crossover was used to launch the Giffen/DeMatteis Justice League. The new title included Mister Miracle in the line-up for the first time.

(1) Post-Crisis there was a third Super Powers mini, by Kupperberg and Carmine Infantino. This ended with Darkseid posing as a superhero called Janus and plotting mischief.

My hat-tip to DC Indexes for its checklists and date information.

Luke, thanks for all of your efforts regarding Darkseid appearances. Since you mentioned Super-Friends, I wanted to call attention to his appearances in the animated series' Superman (1998), Justice League (2003) and Justice League Unlimited (2006). In all three of these he was voiced by the wonderful bad guy actor Michael Ironside.