A defence of text in comics

There are those who believe that comics should tell their stories primarily visually, and use words sparingly. It's true that strong visual storytelling can be very effective, and comics can have striking sequences where words aren't used at all.

But personally, I like wordy comics. I find them enjoyable to read. It makes sense. The movie is a visual form too, and most of us prefer sound movies. For that matter, I like reading prose. Comics are less demanding reading than prose, and that's one of the reason I like them. But it doesn't follow that comics are under an aesthetic obligation to minimise their text blocks.

For example, a speech by a single character might be spread over several panels instead of appearing in one. That breaks the text up, and leaves space for more visuals. When the art is good it's hard to argue that more of it should have been covered up. Yet the result might be a story that reads more quickly but moves more slowly.

This post displaced the thread So, What Are You Reading These Days? (besides comics) from the home page.

While I'm on a roll regarding DC One Million and its different approaches to the text/illustration thing...

Bryan Hitch did the art for Green Lantern 1,000,000.  Hitch is possibly a pivotal figure when we are talking about 21st century art trends.  Perhaps himself and John Cassaday were most responsible for the decompressed style which so many complain about these days.  They did The Ultimates and Planetary, respectively.  In both they did beautiful widescreen art that the writer allowed to carry much of the storytelling weight and drama.  Like all the worst trends in comics it took off when everyone started copying what a few pioneers had done to great effect, but without any understanding of how they'd done it, what exactly they were doing.

I'll be coming back to Decompressed storytelling in a bit.

For now, here are the final two pages of Green Lantern 1,000,000, that use virtually silent pages to two very different effects:

Storywise, we only need to know that GL has been defeated in a space battle with SOlaris, the Tyrant Sun, and is hurtling unconscious toward the surface of Mars in the far future.  This would normally only take a panel or two and a few hackneyed captions for a creative team interested only in telling the fanboy what what happens next to the hero, but writer Ron Marz and Hitch take 2 pages. 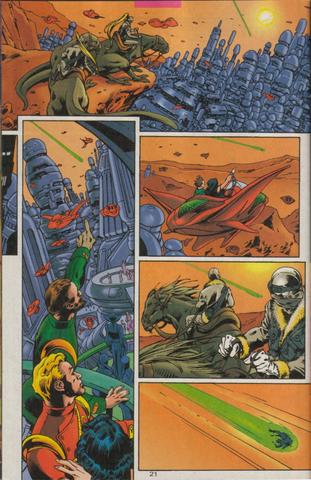 I only recognise Flash Gordon and maybe Adam Strange and Alannah, if that's who it is, but this page does convey a sense of wonder and an idea that in this wondrous future our pulp sci-fi dreamsare possible.  Also, this is art with a memory of what came before in its tradition, which is a good thing.   Those are a few frames of what people have been getting out of pulp stories for generations.  The page is wonderful in itself.  Even the slightly puzzling non-sequitor quality of these images in a Green Lantern comic is fun to ponder.

So the lack of words can be compensated with all sorts of good things, that again, make rereading this issue a pleasure.

The final page shows Kyle touching down in an unexpectedly moving, poetic sequence: 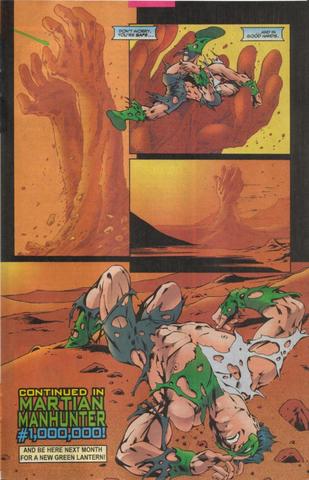 Simple words of comfort when they are needed most.  Strong powerful arms that break Kyle's fall and save his life.  It's been stated already that no-one in this time carries on the GL tradition, or knows what happened to Kyle long ago, so this is notable that there seems to be someone here who cares for him.

Actually the pictures with those few words are a bit like poetry, using pictures to trigger powerful associations and work as symbolism for very human situations and feelings.  It's a place, a location that offers him security and safety, just as there are places many of us feel safe and secure when we need some respite from our battles.  We later learn it is an old friend who has appeared just when Kyle needed him.  (The clue is in the 'continued' box.)  The gross size of the arms compared to Kyle evoke notions of a parent's protection of their baby.  Even Kyle's lack of consciousness is like how Ulysses was carried from his boat asleep at the end of his long odyssey home.

Again the lack of verbiage, and the allowance the creative team make for the reader to make their own connections, all make these two pages a notch above the usual superhero fare.  In both cases the page itself is allowed to be something that the reader can take pleasure in, beyond just conveying beats in a story.

Regarding decompressed comics, it did come down to artists using the same widescreen, letterbox panels of Hitch and Cassaday (and their collaborators), but not having a clue how they can be used to make the comics-reading experience better.

Here's a blog post that illustrates really well how it all went wrong in Fraction's Iron Man.  I completely agree with him that loads of space is wasted on the pages, nothing evocative or engaging is shown, and like him I found Fractions's Iron Man to be so turgid and unrewarding that I simply had to stop reading halfway through one of the collections and haven't touched one since.

I loved this bit of commentary on all the wasted areas of the page:

Regarding decompressed comics, it did come down to artists using the same widescreen, letterbox panels of Hitch and Cassaday (and their collaborators), but not having a clue how they can be used to make the comics-reading experience better.

See I always associated decompressed comics with the writers, and some ( a lot?) using it as a device to pad their stories for the trade. It really started to irritate me in the late 90s or so when you could see a story that may have been a 3 parter stretched out to 6 so it could fit into one trade.

I really liked Tony Harris on STARMAN. He was actually the regular artist until issue #45, which was shortly before #1,000,000. Snejbjerg did most of the remainder of the series. Harris went on to draw the entire EX MACHINA series.

Tony Harris was the regular artist on the series, and I think I read that the physical appearance of the main character Jack Knight, was based on him.

Who was it that added the comment in red "This Space For Rent"?   Was that art published that way, or was it a comment added during a blog?

Yes, it was just hastily photoshoped by the author of the blog I link to above.

Actually, it was reprinted in the Starman Omnibus (volume 4), and it was reprinted by Dark Horse in Hellboy: Masks and Monsters. And you're right; it wasn't bad. (Yet, somehow, IMO, not as good as Starman or Hellboy.)

I am one of the few people who believes Tony Harris was at his strongest when he was on Starman. I much prefer the angular lines of his earlier work to the more rounded, modeled work of recent years. And if he was going to leave that title, I am really happy that it was Peter Snejbjerg to take over for him. I actually think we came out better on that count.

I liked Tony Harris too. AND Snejbjerg. Starman was my favorite series of the '90s, easily, followed by Hellboy. There was a inter-company crossover with Starman, Hellboy, and Batman that was pretty good, written by James Robinson and drawn by Mike Mignola, titled BATMAN/HELLBOY/STARMAN (how imaginative) and running all of two issues, dated January and February 1999. I don't know if it's been reprinted (but I doubt it), so it may be tough to find, but if you see it, check it out, I've read lots worse, and these days two issues is practically a stand-alone story.

Thanks to Stan Lee, I knew what "armageddon," "cataclysm," "apocalypse" and "holocaust" meant at a tender age.

I also liked the heavy verbiage, and I appreciated that Stan and Roy gave me my money's worth when I paid my 12 or 15 cents.

...I thought this might be a defense of the occasional comic book story (Some of Steve Gerber's in the 70s and some of " Charles Moulton "'s early Wonder Woman stories) that ACTUALLY lapse/phase into full text - with illustrations , I guess - in the middle of the story !!!!!!...