You'd think that having been Tracy's partner since 1948, Sam would know when Tracy's birthday was.

This week, they devoted the themed letters to those who protested the decision.

Frankly, if I thought a letter would have helped get that stinker removed, I would have written years ago.

From time to time, any given newspaper is in the position of wanting/needing to drop a strip, which they tend to put off as long as possible because it will be in for a lot of bellyaching from that strip's readers.

In a previous conversation here about that phenomenon, somebody mentioned how his local newspaper handled it, which I thought was eminently sensible: Don't drop the strip that draws the most complaints; drop the one that has the fewest defenders.

That said, if I thought a letter would help get Mallard Fillmore out of one of my local newspapers, I'd write one every day. (But that particular paper is so terrible I never read it anyway.)

Sally Forth has spent the past two weeks marking its 40th anniversary in a creative way: By having the characters break the fourth wall and meet with the introductory versions of themselves.

"Sid" looks a lot like one of the Thom(p)son Twins from the Tintin books. 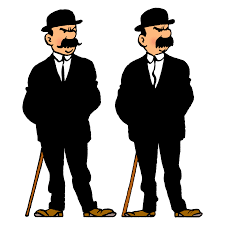 The Sally Forth retrospective continues:

Sunday, Jan. 9, a special Sunday strip through the decades (with various panels modeled on Blondie, Brenda Starr, Dennis the Menace, and The Fabulous Furry Freak Brothers):

The series continues into this week, but I just found a blog post that includes the first published Sally Forth strip:

Thanks for posting these, Kelvin. We take only the Sunday paper (Dallas Morning News). I would not have seen them otherwise.

Some clever stuff. I'm going to add it to my Comics Kingdom (aka King Features) weekly reading. I'm going to start back when Mom leaves her house (11-8-21).

Continuing with the Sally Forth 40th anniversary:

The Sally Forth 40th anniversary series concludes this week.

Lee Houston, Junior replied to Steve W's discussion A Cover a Day
"Another Neal Adams variant and his original work he homaged. (Images courtesy of the Grand Comics…"
4 hours ago

Richard Willis replied to Jeff of Earth-J's discussion E-Man
"I loved the original Charlton E-Man (with Mike Mauser!) also. I've never read any of the later…"
5 hours ago

Jeff of Earth-J replied to John Dunbar's discussion Marvel and DC Golden, Silver, and Bronze Age collections
""...the collections and OGNs in the "August" list are actually solicited for…"
7 hours ago

The Baron replied to Captain Comics's discussion Conan license yanked from Marvel Comics
"Didn't they just put Conan on an Avengers team?  Bet they feel like suckers now."
7 hours ago

Captain Comics replied to John Dunbar's discussion Marvel and DC Golden, Silver, and Bronze Age collections
"I don't doubt you're right, Jeff. There's a LOT of delay these days. I've got a…"
8 hours ago

Jeff of Earth-J replied to John Dunbar's discussion Marvel and DC Golden, Silver, and Bronze Age collections
"The Phantom Stranger Omnibus was originally solicited for May 24 release, so we may…"
9 hours ago