The Shocker, for example, came to be seen as something of a joke by the ‘80s, but there’s nothing “jokey” about his two earliest appearances.

I forgot that Romita originated the Shocker. He has a Ditko style about him. I agree that he was an impressive bad guy, and I liked his costume. I never understood why he was seen as a joke.

We also get a return from the front line in Vietnam of Flash Thompson, fawned over by both Mary Jane and the , still quite angularly drawn Gwen Stacey. Flash is surprised to hear how popular Peter Parker seems to be whilst no one seems particularly surprised that Flash has got time off from military service he’d only just left to join hadn’t he..?

I commented on this on another thread. In ASM #47 they have a going away party for Flash. It is made clear that he was drafted. Since he was in college this presumably means that his grades had fallen below whatever the standard was to maintain a student deferment. He had not yet reported for induction into the Army. (At the end of ASM #47 Spidey saves Norman Osborne from a fall after Kraven the Hunter throws him off a roof, which is pretty ironic.) At the beginning of ASM #48 Stan has Spidey talk of searching the city for Kraven, which implies that it very closely follows the events in #47. The story in #47 continues directly into #48, so no time has elapsed. Finally, in #49's "Spider-Man No More," we have an issue that doesn't refer to recent past events. Gwen shares a letter from Flash with Peter. It sounds from what is said that Flash is on his way to Vietnam.

This gap in the action gives us a chance to infer that time has passed. Since it is clear that Flash went into the Infantry he had to go through basic training and advanced infantry training. This takes a few months. Like many others, Flash's next assignment was to Vietnam. In other cases (such as mine) the first assignment is to a stateside or other base before going to Vietnam. Some were never sent there. When assigned to Vietnam the first thing that happens is you get to go home on leave. You don't get to go home on leave after you get to Vietnam. They had it backwards by having Flash hang out with the gang while home on leave from Vietnam. During a Vietnam assignment a service member had an opportunity to take one or more short 5-day R&R breaks. These were either "in-country" (China Beach or Vung Tau) or to one of several nearby cities outside Vietnam. Married service members were allowed a 7-day R&R to Hawaii, where they could meet their spouse. R&R meant "rest and recuperation" and was not charged against a service member's leave time. The only time someone could actually return home was in a family emergency with special permission.

Story evidence to the contrary, Flash's appearance must have taken place after basic training and before he shipped to Viet Nam. That's the only scenario that makes sense. I just ignore that dialogue that places him there (or interpret it as light-hearted banter or something).

Glad to see this thread! This is entering my favorite Spider-Man period, when I believe he had the best supporting characters (and attendant subplots) in comics. Of course, I may be prejudiced. Romita is my favorite Spidey artist as well.

We see Parker's college life begin to take shape right around here. Foswell's gone, but Joe Robertson enters the picture. Flash is leaving, but Gwen is showing up a lot more. And soon we'll have her dad. Things are just getting started.

Oh, and we'll also get to where Captain Comics began buying Amazing Spider-Man with his own money! He'd had subscriptions for two years as birthday presents, which ran out with the first part of the Doc Ock two-parter. Oh, the humanity! So he had to go get the second part.

You mentioning your introduction to ASM made me check up mine, UK Marvel’s Spider-Man Comics Weekly’ and I just noticed that they reached reprintings of these issues we’re discussing at Christmas 1973 – 41 years ago ..Now. 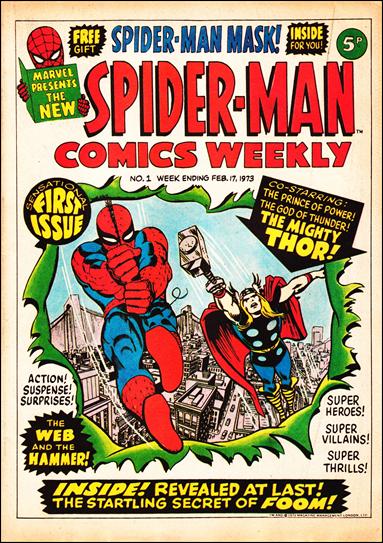 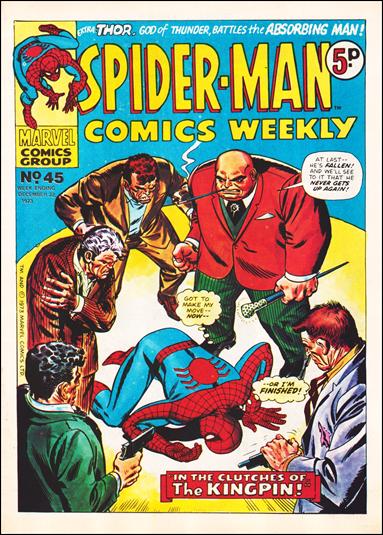 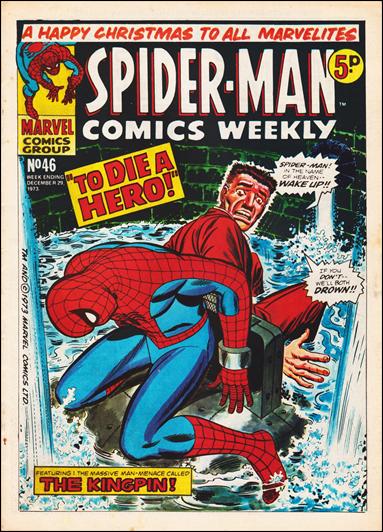 The thing that jumped out at me on these covers is that a British publication printed a U.S.-style date on each cover:

This probably means the production occurred this side of the pond.

ASM Annual #4 actually makes reference to the next Annual –(#5) – being an adventure developing the history of Peter Parker’s parents ...a full publishing year before the actual issue.
Why would this be?
I cannot think of another similar example.

I have always wondered – and maybe readers on this forum may be able to shed light - - was there a delay in the parents story so another had to be substituted even though the plot was known...or – (and I prefer this option) was ASM Annual 4 actually originally a Human Torch vehicle, GUEST starring Spidey, perhaps for the Strange Tales Human Torch book which by this time had stopped production?

The Torch gets the boot after Strange Tales#134, dated July 1965. Amazing Spider-Man Annual#4 was dated November 1967, almost two and a half years later. Strange Tales only had two annuals, dated 1962 and 1963, and the Torch (with guest star Spidey) only appears in the second. Journey Into Mystery got one annual in 1965 with the next annual not coming out until after the change to The Mighty Thor. Neither Astonish nor Suspense ever got an annual. (Why exactly? Were they unpopular?) Since I doubt the Torch would have been let back in just for an annual, I'd guess if the story was meant to appear in Strange Tales it would have had to have been planned for 1964, meaning it would have sat in inventory for a long time. If the two stories were by different artists I could see the parents story not being finished and Stan ordering a new story and putting the first story aside until next year, but I believe they were both drawn by Larry Lieber.

I noticed, too, that the content of Annual #5 was announced a year in advance. My best guess is, given the nature of these stories ("special" content that could be slotted anywahere), Stan assigned then to Larry, giving him plenty of time to take his time on them.

Since I don't think Romita was a speed demon like Kirby, assigning the Annuals/Specials to someone else was probably a smart move. Obviously Stan knew what he wanted in the next one well before it was completed. 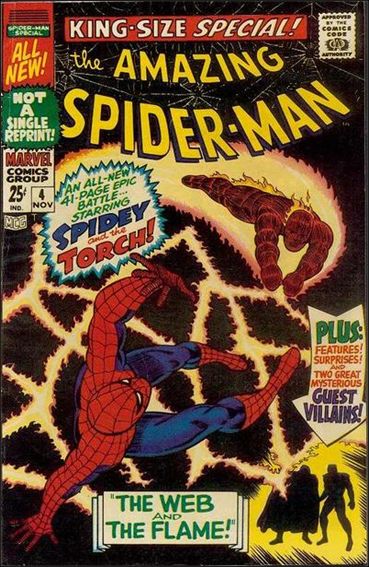 “The Web and the Flame!”

So, exactly when this was commissioned, for what purpose and whether or not the ‘Parents’ saga was late or not – remains a mystery…but here we go on the 4th Annual for Spidey…

It’s kind of a functional cover only, the black making it a rare entity and impossible to keep in mint condition – I don’t think the ‘flame in a web formation’ actually works – do you?

Gotta love the ‘Not A Single Reprint’ blurb!

We open with another round of the rivalry between the Human Torch and Spider-Man that existed in these early days, culminating in hero vs. hero that marvel has become so famous for.

We soon learn that the Torch is actually being filmed for a movie and Spidey has blundered in ending up looking silly.

The Torch in a movie – not original – never ends well.

A mysterious villain hears the news and plans a diabolical scheme…as we learn of a movie offer being made to our two heroes.

On set and our heroes call a truce for the duration of filming but Spidey is quickly attacked by a silent Torch who we soon learn was an imposter.

We meet the villains of this piece, collaboration between Torch enemy the Wizard and Spider-Man enemy Mysterio.  And learn how they teamed up in their plot.

Then we get more of our heroes fighting until they smell a rat, discover their true enemies and chase after them.

This being a movie set – and a lengthy story – we get a robotic monster-sized gorilla attacking our duo as a middle act before the bad guys are finally defeated by good old teamwork between our heroes.

The art is very simplistic and basic, big bold pictures often with only three or four panels per page.

There are no continuing sub-lots or much characterisation – everything is done in one and writ large.

It’s a forgettable tale, mediocre artwork and while it isn’t awful, it nowhere near matches the quality of the regular ASM title….that I’ll get right back to soon…