When they created the mirror image they fortunately remembered to re-letter Robin's "R."

The GCD's page on Batman #16 points this pair out. 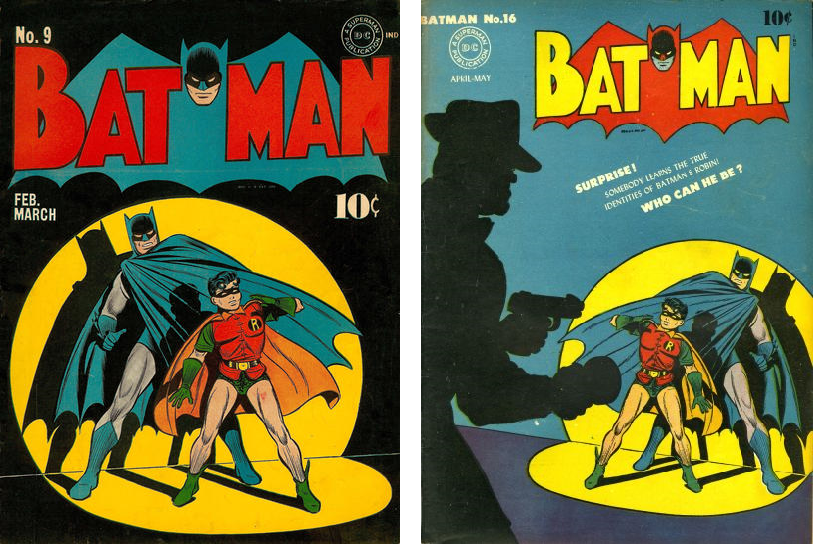 The Gravies, a humour strip by the Dick Tracy studio from the 1960s.

Who was Murat Young? This Toonopedia article on his comic The Affairs of Jane explains.

I remember seeing that on the Sunday funny pages. Wasn't it just slipped right into the end of the Dick Tracy strip, taking up part of its alotted space, for a time? It seemed that artists could get away with that back then.

The Gravies, a humour strip by the Dick Tracy studio from the 1960s.

I've not seen the strip "in the wild", nor much of Dick Tracy from the period. I'd guess the strips were designed so they could be placed that way.

In the 30s Sunday strips often had toppers, which were smaller strips by the same artist that accompanied the main Sunday. Flash Gordon's was Jungle Jim. Dick Tracy's early topper was a gag strip called Cigarette Sadie. I couldn't say if any were left by the later 50s/60s.

At some point the syndicates developed a system of having drop panels and discardable art areas so the Sundays could be printed in more than one format and newspapers could fit them onto their pages different ways. This page has two versions of an Austin Briggs Flash Gordon Sunday. In the second version the last two panels are taller but narrower, so neither version has all the art. In earlier Calvin and Hobbes Sundays the title panel and panel following form a joke separate from the main joke, as can be seen here.(1) In the two Peanuts Sundays here the top two panels don't form a separate joke but aren't needed. Later Charles Schultz often put a symbolic image in the title panel. In the recent Dick Tracy Sunday here the first two panels are discardable and one could arrange the remaining panels in three even tiers. I'd guess the strip is also run as a two-tier strip without the top tier. In the Russ Manning Tarzan strips here the English versions have wide versions of the title panels and the French versions narrow ones and an extra panel in the space.

Chester Gould later made use of parody strips in Dick Tracy called "Sawdust" and "The Invisible Tribe".

(1) Bill Watterson later insisted on being given freedom with his Sundays, so he could design them any way he wanted. 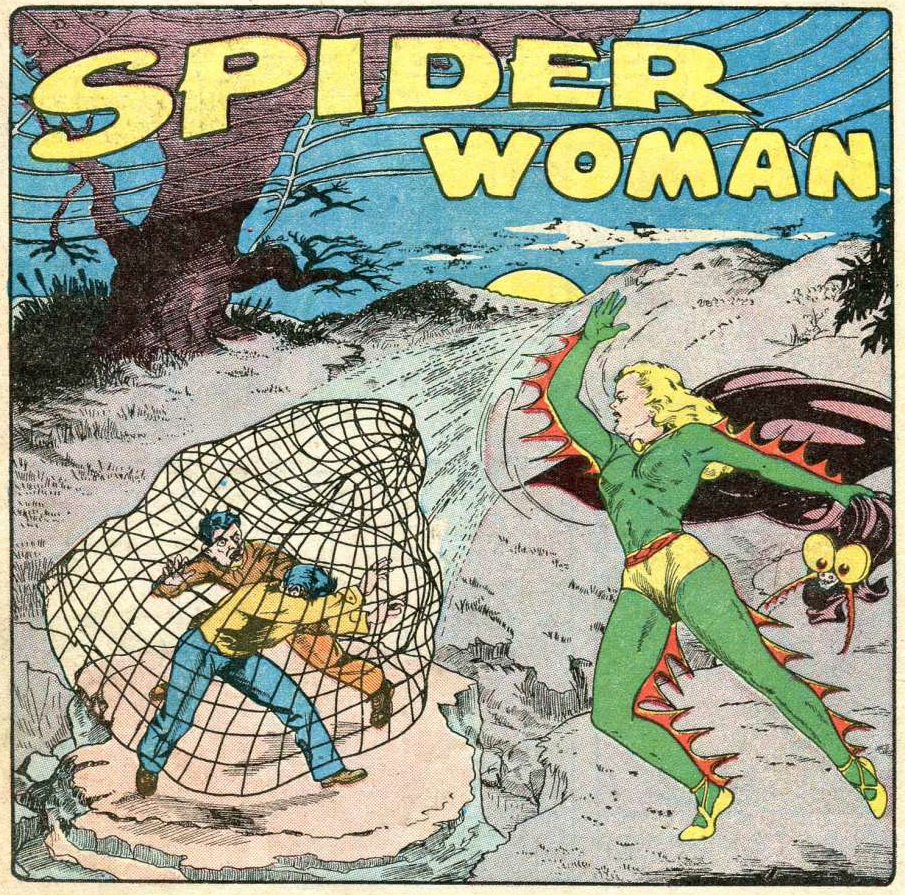 She looks like they originally planned to call her Lizard Woman or Dinosaur Woman.

Or she's on fire.

Speaking of weird outfits, what was with Della, the head witch of Sabrina's coven? The other witches looked either like normal people or like Halloween witches. She looks like Veronica Lodge's older sister cosplaying an S&m superhero:

She looks like they originally planned to call her Lizard Woman or Dinosaur Woman. 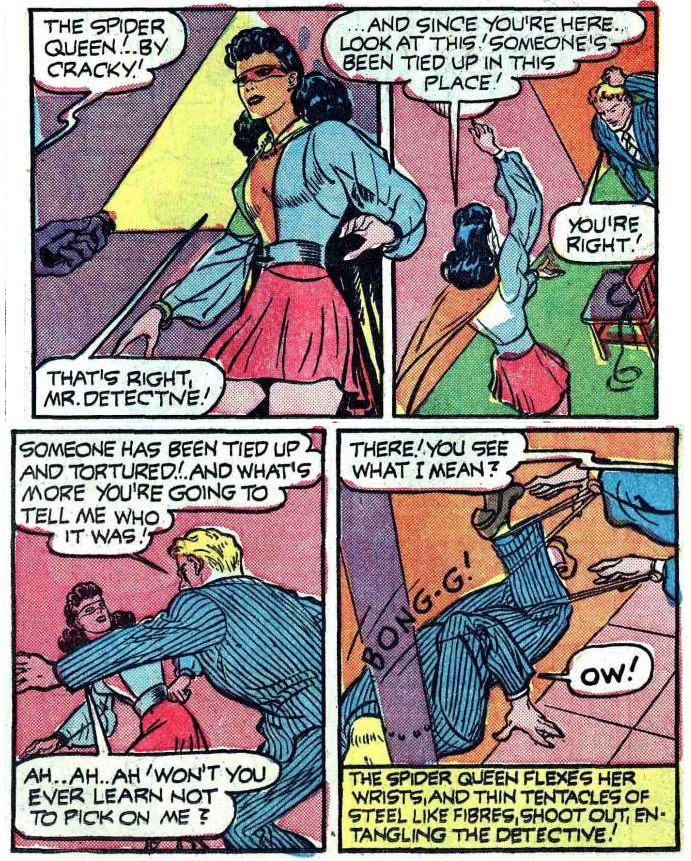 From The Eagle #3 (Fox, 1941), from the scan of the issue at Comic Book Plus. Spider Queen appeared in The Eagle #2-#4. When Roy Thomas used her in the 1993 Invaders mini-series she fought for the Nazis because her scientist husband was murdered by Soviet spies. Her Golden Age origin, in The Eagle #2, says "enemies of his country", which could mean agents of an Axis power. 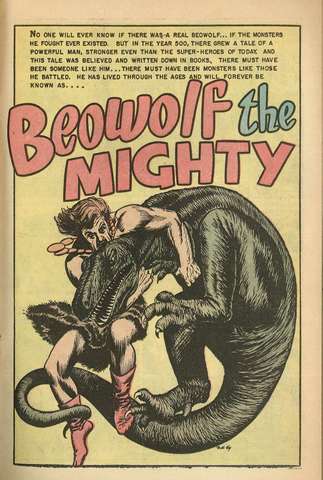 From Conquest #1 (Eastern Color, 1955), from the scan of the issue at Comic Book Plus. This was the only issue.

According to DC Indexes the issue came out in March. It featured stories of heroes of different historical periods. That's similar to the original concept of The Brave and the Bold, which started in June. Perhaps one or the other company got wind of what the other was planning. Conquest's heroes were drawn from history and literature, and it had one-page historical items about women as well as men.

DC did a Beowulf title in the 70s. Don't ask me why it didn't succeed. It sounds terrific.

Dave Palmer replied to Randy Jackson's discussion The List of Super Villain Teams
"Do these guys count as a team? &"
3 minutes ago

Jeff of Earth-J replied to The Baron's discussion Movies I Have Seen Lately
"ROCKIN' IN THE ROCKIES (1945): Unlike the Three Stooges' previous feature-length films,…"
2 hours ago

JD DeLuzio replied to Steve W's discussion A Cover a Day
"The original cover gives a more cynical view of carnies than the digest reprint:"
3 hours ago