I saw this in my favorite used book store yesterday, and thought "How can I NOT by this?" 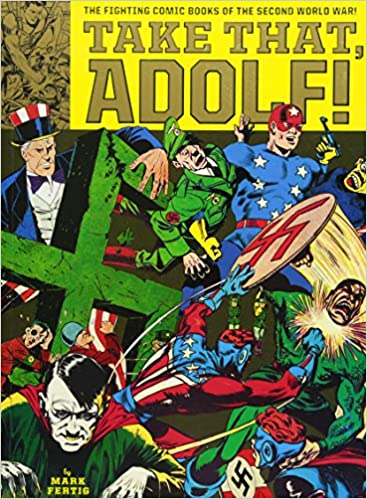 "YOWZA!!!" indeed. I happen to number Anti-Hitler Comics #1 among my personal collection. It includes "Futuro Kidnaps Hitler and Takes Him to Hades!" (from Great Comics #3) and "Unknown Soldier" (from Four Favorites #12) in which Hitler becomes Satan. A second issue was solicited but never published.

If you're interested in or missing nerdy conventions and would like to "attend" an online version, search up Penguicon 2021. It runs this weekend (technically starting Thursday, though not much is happening until Friday night). Access to all events is $10. Penguicon famously combines the SF/Fantasy Con elements with Tech/Open Source/Hacker elements.

I've attached events in which I'm involved. For those not interested in my panels, here's a random comic panel:

I've given variations of this one many times before, as a solo presenter or part of a duo. Audience involvement, slides, and video play key roles. It's a skeptically-leaning discussion that examines the role of contemporary folklore in life, literature, and media. Depending on audience inclinations, we might cover anything from misrepresented news stories (see: Kitty Genovese, James Dallas Egbert III, or the Columbine Shootings) to Bigfoot and Michigan Dogman and Slender Man to online conspiracy theists. In recent years and months, that last topic and the pervasive influence of folklore have displayed their more sinister aspects

Kathryn Sullivan runs this one. I've created an extra-terrestrial or two, and I'm sure we can have an interesting discussion. One of my co-panelists is Stephen B. Pearl, with whom I share a publisher.

To Boldly Seek Discovery in the Expanse: The Voyage Continues

I've run this one at a Toronto con and at last year's ad hoc online Penguicon. I'll be joined again by aerospace engineer/author Eric Choi and GoH Larry Nemecek, and by author/polymath Derwin Mak, who attended last year but was not a panelist. This panel will discuss the various space-related series that (more or less) carry the legacy of the original Star Trek, and what each of us might include if we were running such a series.

Fandom as an Opera

Three panelists will examine the depiction of fandom in books and other media. Novels such as Among Others and Bimbos of the Death Sun, (and my own The Con, for example), have attracted readers inside and outside of fandom. We've seen the savaging-from-within of the subculture's worst aspects in The Eltingville Club and Comic Book Villains. Free Enterprise gave us a fannish comedy flick ("Love Long and Party!") while One Con Glory, a nerd romance novel. We've also had documentary efforts, such as Trekkies, and memoirs, including Trina Robbins's Last Girl Standing.

Was the popularity of The Big Bang Theory a positive or negative thing? Does media and literary exposure create understanding for fandom or turn it into a public spectacle?

Thanks for the heads up, JD. I have joined and will be following all of the events you mention, plus the Babylon 5/Deep Space 9 discussion.

I look forward to e-seeing you! There are a lot of great events, even if an online con can never match the effect of being there. It will have to do for now.

Thanks for the heads up, JD. I have joined and will be following all of the events you mention, plus the Babylon 5/Deep Space 9 discussion. 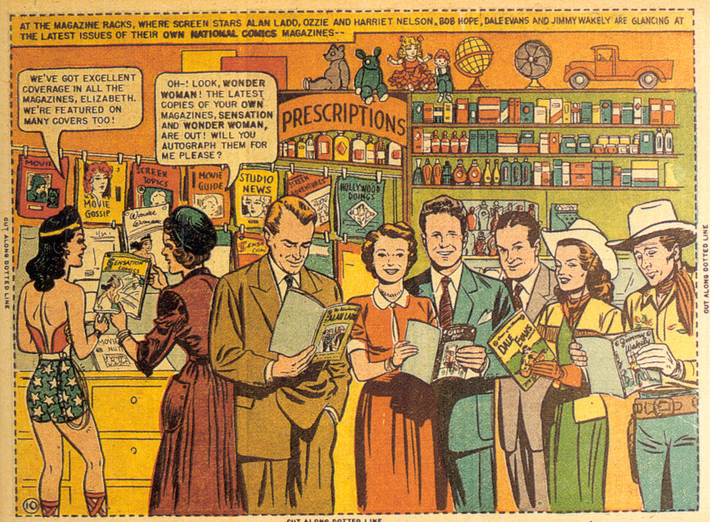 Watch for free on Shout Factory TV. Channel is on Roku.:

Woman in Motion: Nichelle Nichols, Star Trek and the Remaking of NASA

Thanks, JD. I've never seen that.

When Fawcett ceased publishing DC took over Hopalong Cassidy, with #86, and published it for 50 issues. The stories bore a "starring William Boyd" logo. In the later 1950s DC published The New Adventures of Charlie Chan for 6 issues. Both Cassidy and Chan originated in prose fiction, but were widely known in the period as film series characters.

The 1960s added The Many Loves of Dobie Gillis (26), and Bomba the Jungle Boy (7). Bomba was originally a Stratemeyer syndicate character, but he became the star of a B-movie series, and in the 1960s this was repackaged for TV. So the opening covers spruiked him as "TV's teen jungle star!"

Dale Evans had already married Roy Rogers when her DC title started. Roy's comics were published by Dell. Dale's DC series was followed by a Dell one.

From #95 Bob Hope heavily featured the teenage son of a supposed old buddy of Hope's. Normally he was ultra-square Tadwaller Jutefruce, but when angry he transformed into the superpowered Super-Hip. In that period the title was written by Arnold Drake, so Super-Hip made a cameo appearance at Elasti-Girl's wedding in Doom Patrol #104.

In the late 1960s DC got back into teen humour. Windy and Willy appeared in Showcase #81 and their own series for 4 issues. Their stories were altered Dobie Gillis reprints. DC Indexes tells me the series followed hard on the heels of the Showcase issue, so I take it that was a launch rather than a try-out. Date with Debbi had new stories drawn in the Archie style, but its title was evidently recycled from A Date with Judy.

The "Monty West- Sheriff" stories in the final issues of Tomahawk were altered "Hopalong Cassidy" reprints. 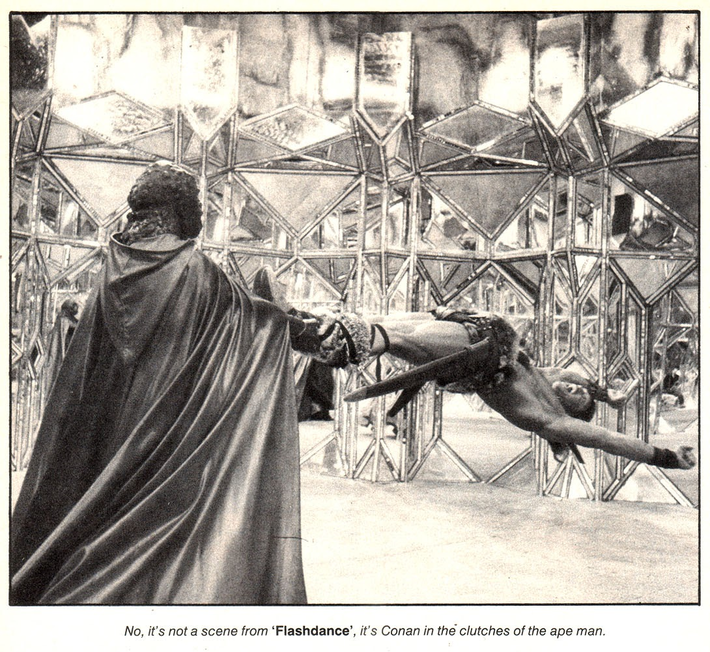 From Marvel Super Special #35, featuring Marvel's adaptation of Conan the Destroyer. The caption makes me wish I could see the scene set to 80s dance music.

In the period it was normal for Marvel's film adaptations to appear both as an issue of Marvel Super Special and a two-issue miniseries.

The film was based on a treatment by Roy Thomas and Gerry Conway. They later turned this into the graphic novel Conan the Barbarian: The Horn of Azoth.

The plot was partly based on the story Thomas wrote for Conan the Barbarian #115, in which a wizard tempts Conan with the prospect of restoring Belit to life.