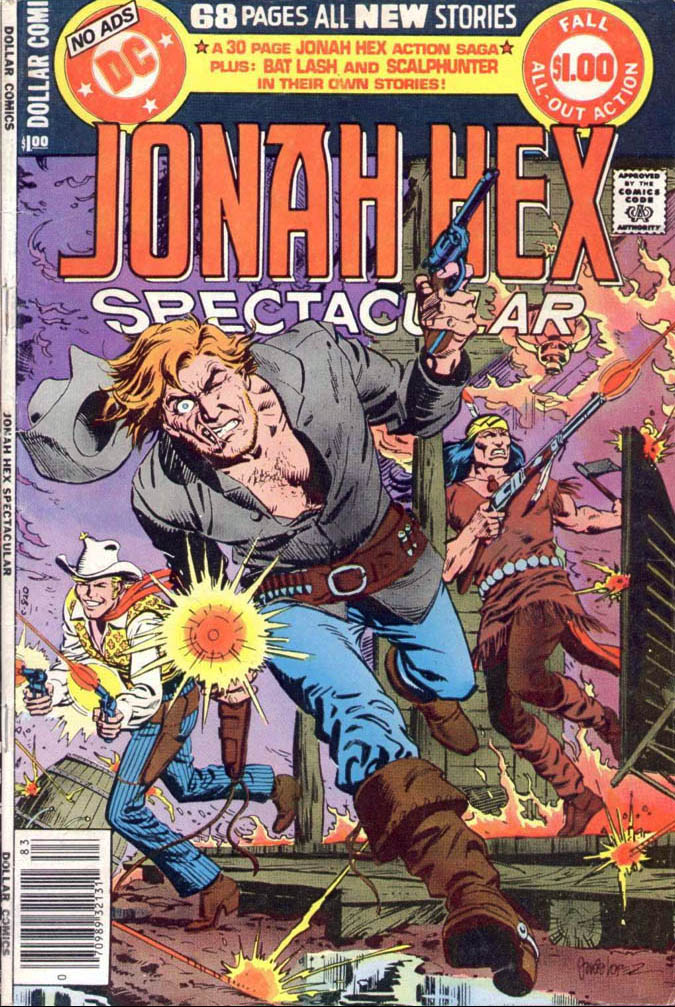 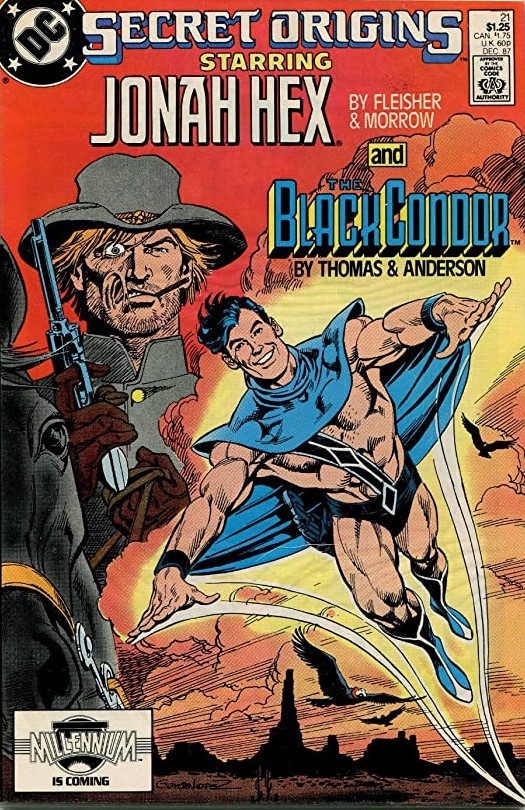 Jonah Hex Spectacular (formally, DC Special Series #16, Fall 1978) took the unusual tack of revealing The Final Fate of Jonah Hex. It's set in 1904, and Hex is 66, now wearing eyeglasses, and grumbling about modern developments like automobiles and airplanes (he mocks the "bicycle mechanics" in Kitty Hawk, North Carolina for developing a useless device that can't stay aloft for more than 59 seconds).

He encounters Michael Wheeler, a history professor from Princeton University who has been searching for Hex to write a book about his life. "It's a new world from the one you knew, Mr. Hex. A world of aeroplanes and motor cars! You're the last of the old time bounty hunters! When you pass away, a whole way of life will pass away with you! All I want to do is preserve some of that life, the way it really was, the way you remember it, so that people of the future -- people who will otherwise never get to see your world at all -- can have some idea of what it was really like!"

Hex accepts the offer, takes Wheeler to his home and introduces him to his wife Tall Bird, and lets Wheeler interview him for the book. At one point, they encounter Lew Farnham of Farnham's Spectacular Wild West Revue, who wants to dress Hex up in a gaudy costume and perform in the act. Needless to say, Hex refuses. (It doesn't help that Farnham got in the way while Hex and Wheeler were hunting a moose for meals to get them through the winter.)

To make a long story short, Hex is murdered by George Barrow in a saloon. A distraught Wheeler brings him home to Tall Bird, who tells him men like Jonah Hex choose their time to die. As is the custom of the Comanche people (so the story says), Tall Bird wants to create a funeral Pyre for Hex, but Farnham and his henchman come along to take the body for the Wild West Revue. In the confusion, they shoot Wheeler, knock out Tall Bird and leave Hex's home ablaze. They take the body to a taxidermist who dresses it in the gaudy costume (although the henchman makes the mistake of putting Hex's pistol in the corspe's hand and the gun goes off in his face).

What we readers did not know is that there is a real-world analogue to this story. Here on Earth-Prime, the embalmed body of train robber Elmer McCurdy was preserved and put on display in a traveling carnival (as described at the Library of Congress in "Elmer McCurdy: Traveling Corpse"). McCurdy's corpse was accidentally discovered by a crew filming an episode of The Six Million Dollar Man in an amusement park in Long Beach (as told here in Slate, "How a Real Corpse Ended Up in a California Park Spookhouse").

The sequel to "The Last Bounty Hunter" in Secret Origins #21 (titled "Requiem for a Gunfighter") riffs on that discovery -- Hex's body in the gaudy costume is found during the filming of a TV show. A wealthy collector of Western artifacts enters the picture; he owns the very cards Wild Bill Hickock was holding when he was shot to death, a tomahawk owned by Scalphunter, etc. But his prizes are his Jonah Hex stuff. He's got the dress Hex's first wife, Mei Ling, wore at their wedding, Hex's spectacles, and the table he was seated at when George Barrow gunned him down. This collector is agog at the thought of getting Hex's actual body.

But there's a wrinkle: Tall Bird is still alive! And she's got an injunction to claim the body because she still wants to give it a proper sending off in a funeral pyre. Another Princeton professor, Dr. Lawrence, one who wrote the definitive book on Jonah Hex, helps her in that quest. Lawrence visits with Tall Bird, who reveals that Hex said "He told me he had been vouchsafed a visit to a strange new world -- "

"-- but he would not reveal more than that and we never spoke of it again."

Unfortunately, the collector and his goons are after Hex's body, and confront Tall Bird and Dr. Lawrence. But there's one more surprise in those old ivory-handled dragoons Hex used to carry. (Apparently, Fleisher forgot Hex chucked those guns into a lake in a drunken fit of despair.)

When I was a kid I wasn't interested in Westerns, which I regret now. So I've only ever read a little Jonah Hex. I think very highly of it. It pushed the envelope in the right way, exploring the reality of the Old West. Hex was a rounded character, with virtues and faults. My regard for Tony DeZuniga constantly grows.

A point of interest: the artist of "Requiem for a Gunfighter" was Gray Morrow, who drew the final issues of Jonah Hex.

My first Jonah Hex was the Vertigo version.

I first read a Jonah Hex story in Weird Western Tales #21, and read the occasional story after that, but didn't seriously follow the character until Jonah Hex #45, in which he gets married (as noted here). That issue made me get the complete run of Hex stories across All-Star Western/Weird Western Tales and Jonah Hex, and follow the character through all the other titles he's headlined since.

Before the Vertigo version, the overwhelming majority of Jonah Hex stories were written by Michael L. Fleischer, who really built him into a well-rounded character over 10-plus years of writing his adventures. I wonder if a modern writer could accomplish that, especially as the use of thought balloons are now verboten. Fleisher really used them well to get inside Hex's head.

The Vertigo version was written by Joe R. Lansdale and drawn by Tim Truman. I was not familiar with Landdale's stuff, but Truman's work I knew because of Scout and its spinoff titles New America and Swords of Texas, and the Scout Handbook. These Vertigo Jonah Hex titles -- Two-Gun Mojo #1–5, 1993; Riders of the Worm and Such #1–5, 1995 and Shadows West #1–3, 1999 -- really leaned into the "weird" part of "Weird Western Tales". They were different than the straight gunplay and adventure of Fleischer's stuff, but I think are worthy successors. 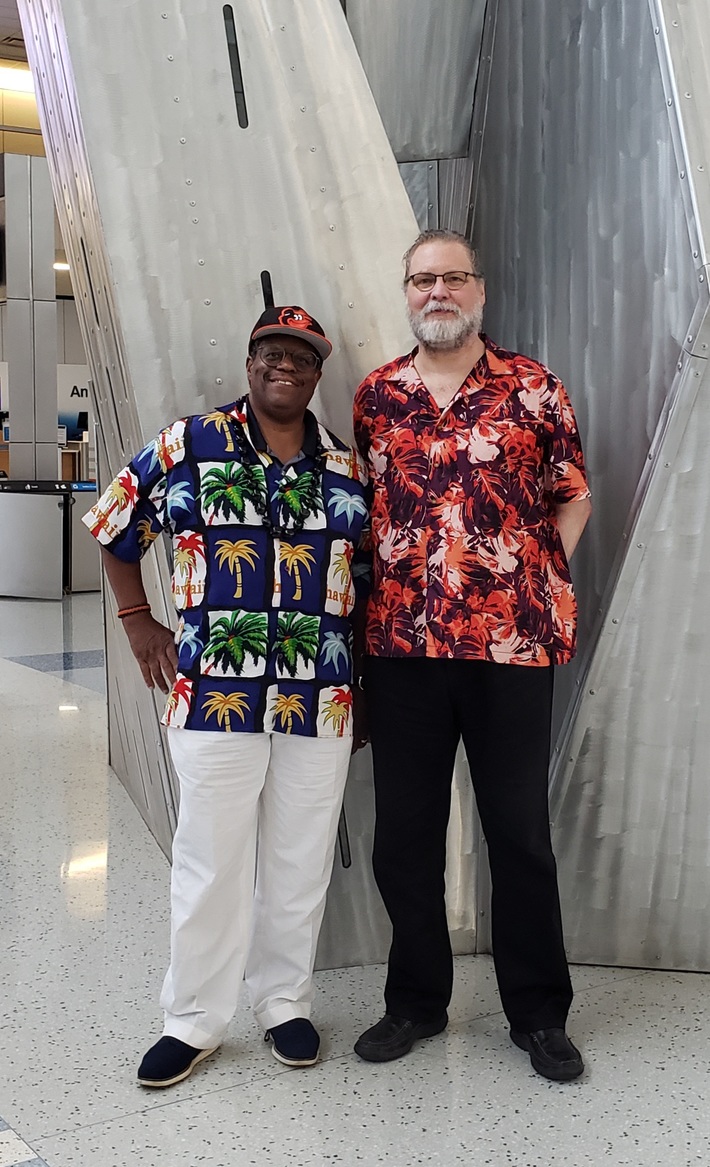 TThese guys! It was a great visit.

Who knew those guys had such a dapper sartorial sense?

Finally a good look at Jeff!

Aloha shirts are proper attire for any occasion.

Who knew those guys had such a dapper sartorial sense?

It was great to meet Jeff of Earth-J and Tracy of Moon-T live and in person! My wife and I were returning home from vacation in Hawaii to celebrate joint milestone birthdays, and Jeff and Tracy met us at the Dallas airport and graciously had us as their guests at the American Airlines lounge ... on their wedding anniversary!

So, continuing a tradition started here by somebody (don't remember who, unfortunately), Happy Anniversary!

"Why, exactly, do you have a fresh pair of little-girl pyjamas in the trunk of your car?"

It's a fair question, really. I have no children. My nieces and nephews are all adults, and my one grand-niece to date will not grow large enough for the sleepwear in my trunk for a few years. My one-time youthful sidekick, Singularity Girl has become a Singularity Woman with two children, sure, but they are boys and, even in this era, they would wear less gendered-leaning pyjamas.

"Oh, those. I was supposed to give them to some witches in Dorchester."

"Yes. But I got the date wrong for this year."

"I wanted to watch the witches dance."

A group of women who live in nearby Dorchester have developed an unusual Halloween tradition. One of the women was born near Halloween. She also has fond memories of receiving new pyjamas on her birthday when she was a little girl. Kids often get forgotten when it comes to donations to shelters and food banks. So now, every October, they meet in the town park dressed as witches and dance. The cost of seeing them perform is a charitable donation-- with brand-new kids' pyjamas being the preferred coin.

I shall either have to donate them directly somewhere or hang onto them until next year.

--from my Goodreads blog.

I can’t find it, but I was alerted on a Round Table thread (I think) to this graphic novel from Caliber Comics (calibercomics.com).
Sherlock Holmes: The Case of the Missing Martian by Doug Murray

What I didn’t know until I received the book and saw a house ad was that there are several related graphic novels from Caliber Comics. Amazon isn’t cross-referencing them because the authors are different. There are various artists:

Sherlock Holmes: On the Air * by Steven Philip Jones and Matthew J. Elliot
*This one is not actually a GN. Jones and Elliot did several original Sherlock Holmes stories for the radio and these are their prose adaptations. Each story apparently has a single illustration.

All are available on Amazon. I’m getting all of them except On the Air.

Steve W replied to Steve W's discussion Comical Comic Cuts
"Last day of 'courtrooms' on 'A cover a day'. Thought this was…"
3 minutes ago

Richard Willis replied to Steve W's discussion A Cover a Day
"Some of the transition covers are prompting me to get a clarification. I had the impression that…"
7 minutes ago

Jeff of Earth-J replied to Jeff of Earth-J's discussion Tales to Astonish
"BILL EVERETT - (#78-83): Back during the early days of The Jack Kirby Collector, publisher John…"
1 hour ago

Eric L. Sofer replied to Steve W's discussion A Cover a Day
"One final one..."
1 hour ago

Peter Wrexham replied to Steve W's discussion A Cover a Day
"I have to admit that this month has been a lot more challenging than I expected.  There are no…"
3 hours ago

Dave Palmer replied to Steve W's discussion A Cover a Day
"Let’s see, a doctor and malpractice.  That might lead to a courtroom in the future."
7 hours ago

Jeff of Earth-J replied to Jeff of Earth-J's discussion T.H.U.N.D.E.R. Agents
"Toby is still unclear that he killed his brother. I interpreted that line differently, as in,…"
8 hours ago

Jeff of Earth-J replied to Jeff of Earth-J's discussion Tales to Astonish
"The Executioner doesn't have his axe. Ooh, that could be a plot point in my head canon fanfic…"
8 hours ago

Jeff of Earth-J replied to Steve W's discussion A Cover a Day
""I'm not sure if the plot point of who the Valeyard, the prosecuting Time Lord, turned…"
8 hours ago

Luke Blanchard replied to Jeff of Earth-J's discussion Tales to Astonish
"The Executioner doesn't have his axe. It was taken off him when he was exiled to Earth in…"
12 hours ago