The Earth-44 Timeline, Appendix Seven: The Legacy of Superman

(I thought I’d have a shot at re-writing this into a more comprehensive form. This whole Earth-44 business grew out of an attempt to combine all of the various Superman continuities into one coherent timeline,  that just sort of grew.  Of course, it’s impossible to combine them as they are, there’s too many contradictions between them. Thus, some of these characters are going to bear only a tangential relationship to their actual comics counterparts. Note also that I haven’t included every variant Superman that I’ve heard of, let alone the many I’m sure I haven’t. I had to stop somewhere, this thing is pretty convoluted as it is. The footnotes will be there to explain some of my reasoning behind the way I’ve fiddled and diddled – to quote Johnny Most – with the various characters.)

A Timeline of the Superman Family

(1)This is a combination of the earliest Golden Age Luthor and what would later be the “earth-Two” Luthor,  that was killed off in the Crisis on Infinite Earths. In other words, the red-haired, somewhat thuggish Luthor.  I don’t have any canonical support for my placing his birth in Eastern Europe. I recall that in one of his earliest stories, he was said to have been causing trouble over in Europe, and “Alexei” sounds Eastern European to me, so that’s where I placed him.   I thought about making his birthplace Latveria and possibly even making him a relative of Victor Von Doom, but I thought that might be a little too “Uncle Roy ties it all together for you”.

I imagine this Luthor as a wanderer, quickly outstaying his welcome wherever he goes. He’s been just about everywhere, and isn’t welcome back.

(2)I picked 1913 as a date because it seemed to me that 25 was a good age for Clark to be when he started out as Superman. At least, in the earliest superman, he didn’t look to me to be any younger than that.  I went with “Jor-El”, “Lara” and “Kal-El” simply because I preferred those names to “Jor-L”, “Lora” and Kal-L”.

(3)This character is roughly analogous to the character from the Earth 2: Society books, with his backstory largely re-written.

(4)To the best of my knowledge, this is largely as things were presented in Silver Age continuity.

(5)Is three a little old for Kal-El to be arriving on Earth? I dunno, but I went with it. Also, I went with “Jonathan and Martha” over “John and Mary” or “Eben and Sarah” just out of personal preference.

(6)The whole business of Luthor’s liaison with Pickman’s sister, and who her children turned out to be. Was not my idea, but I can’t remember whose it was to give proper credit.  I realize it doesn’t have a whole lot to do with Superman as such, but I included it for amusement value.

(7)To the best of my knowledge, this is largely as things were presented in Golden Age continuity.

(8)In the Earth-44 universe, there are several different kinds of “Martians”.

(9)This is just for amusement value.  I just figure that if all these characters did exist in one universe, these kinds of odd meetings would happen all the time.

(10)I’m sticking with the notion that while Superman was always a friend to the JSA, he was never a big part of it.

(11)Superman spent a lot of time at the World’s Fair in those days.

(12)I picked this year so that Kara would be about 16 when she arrived on Earth, which was the age she seemed to me to be in her early Silver Age stories.

(13)Personally, I always preferred the Golden Age version of the character.

(14)This child will largely have the childhood that the Silver Age Superboy had, only with Clark and Lois as “Ma and Pa Kent”.  I imagined them moving back to Smallville with the idea that the relative isolation of the farm would be a better place to raise a potentially super-powered child.

I will take this moment to address the issue of interbreeding between humans and Kryptonians.

In the Earth-44 Universe, Krypton genetic coding is carried on what I am calling “Plotconvenienceo Nucleic Acid”  (PNA).  PNA mixes unpredictably with human DNA, so that offspring of a human/Kryptonian union may be fully human, fully Kryptonian, an admixture of both, or have unpredictable other powers.

(15)This child will grow up to be the “criminal scientist” Luthor of the late Silver and Bronze Ages.

(16)This child will grow up to be Power Girl.  I made her Lois and Clark’s daughter mostly because I didn’t want Kal-El to have two separate cousins named Kara arrive on Earth. I picked this year for her birth since I figured it be about right for her to be grown up by the year that the character  debuted in real life

(17)Of course, a super-boy is going to love having a super-dog to play with!

(18)I realize that this year has no real connection to any year Superboy might have been said to “debut” in the actual comics. It just seemed to fit for me.

(20)I would have preferred to have a second-generation Superman be a founder of the League, but for Superman to have an adult son but 1960, I would have had to marry him off several years sooner than I would have liked.

(21)I figured Kara would have made this shift around the time she reached adulthood.

(22)I haven’t worked out who Jimmy Junior’s mom would have been.

(23)I thought about having the Crime Syndicate exist in the “main” timeline, but decided to keep them in their own universe.  I imagine that the Earth-44 “Mirror Universe” (Earth Minus-44?) combines elements of the Mirror Universe as initially seen in Star Trek (and later in Mystery Science Theater 3000 and South Park) and the “Earth-Three” universe as seen in DC Comics.

(26)This is the character that will someday grow up to be the “evil businessman” Luthor of the post-Crisis years.  I haven’t worked out who his mother was, or who brought him up. I don’t imagine Lex Senior being a “Father of the Year” candidate.

(27)The Baron is an extremely silly person.

(28)TheEarth-44 Lana Lang is of an age with Clark Junior. I realize that probably doesn’t fit in well with her debut year in the comics, but I decided it would be amusing  to have Lois and Lana each get a “Superman” of her own, not to mention having  Lana end up as Lois’ daughter-in-law.

(29)I thought Cap would make a good match for our Linda.

(30)What’s she doing in a Superman timeline? We shall see.

(31)I am assuming she would change her code name as she got a bit older.

(33) While the four characters that sprang from the “Death of Superman” storyline, we can assume that their back stories are a touch different in the Earth-44 universe, as when Doomsday came to Earth, he encountered three generations of Supermen, a Superwoman or two, Power Woman, the Marvel Family, Supreme, the Samaritan, Thor, the Hulk, the Thing, the She-Hulk, then Martian Manhunter, the Vision, some Wonder Women and old Uncle Tom Cobbleigh and all, who beat the living snot out of him, then gave him some lunch money so that he would have some that they could take it away from him.

(34)This is the Tangent Green Lantern, who had multiple possible origins, one of which was that she was an archaeologist called Lois Lane. Who is she to the original Lois? I haven’t decided yet.

(35)I’m choosing to ignore the period that Matrix was “Supergirl” on her own.

(36)While there occasionally are corrupt government agents in the Earth-44 universe, they’re not nearly so widespread as they are in other comics universes.  There will still be some who – although well-intentioned – are antagonistic towards super-heroes.

(37)This is a variation on the Amalgam version of the character. I assume he had an accident with some Green K at some point.

(38)I seem to recall that in the comics, the Conner Kent Superboy didn’t age. If so, that doesn’t apply here.

(39)This character is from one of the Tangent books.

(40)This character is from one of the later Amalgam books, where he was a combination of Captain America and Captain Marvel Junior.

(41)May Parker (a.k.a. Spider-Woman III) is the daughter of Peter (Senior) and Mary Jane (Watson) Parker.

(43)This character is from the Son of Superman graphic novel.

(44)Shannon Carter is the heroine known as the American Dream.

(45)This is the “Just Imagine” version of Superman. The business about his home planet being a Kryptonian colony is my own invention.

(47)This is a variant on the character from “Superman: True Brit”.

(48)Based on the character appearing in the “Earth 2: Society” book.

(49)This character is meant to be roughly analogous to the “heroic” Luthor in current continuity.  My take on him is that he sincerely means to do well, but that he still has a certain amount of “traditional Luthor arrogance” which will cause him problems sometimes.

(50)These characters are counterparts to the current day Superwomen, only instead of being friends, they are sisters.

(51)I see this character as roughly analogous to the “New 52” Supergirl, only a touch less harsh.  Basically good-hearted, but not handling being the child of “super-hero royalty” as well as some of her siblings or cousins.

(53)Yep, eventually, the Kent, Wayne, Rogers, Stark and Parker families will all end up connected.

(54)These are counterparts to characters from John Byrne’s Generations books.

Updated for the Earth-44 versions of the New Super-Man and the Lex Luthor Superman. 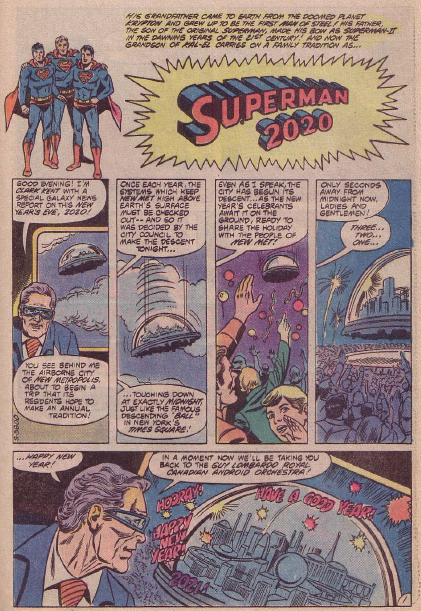 I remember those stories. Not sure how, I'd shoehorn him in.  Maybe I'll do a Superman-only timeline sometime so I can make it more detailed .

I have extensively revised and updated this, and changed the format in hopes of making easier to follow.  Free free to question or comment, as you see fit.