Ahh, good to be back.

I haven't bought ANY new comics three or four years, and only a bare few then, Are they worth it now? When I started reading (in the Silver Age, of course), the stories were a touch simpler, but I dug 'em. As they got into the 70s, I liked some of the more complicated stories - even the continued story - so I collected harder.

Continue into the 80s and 90s, Books got WAY more expensive, and things got a lot more complicated... and I wasn't enjoying the grim and gritty direction they books went (although I liked Dark Knight Returns and Watchmen.) And the cross company crossovers that led me to books that I had NO interest in. Those crossovers convinced me even more that I didn't want some of them, but I HAD to get them to follow the stories,

I got tired. Too expensive, too many gimmicks, too "real life"*, too unoriginal. I kept a couple books, but they were cancelled and I got down to none. FWIW, my last books were DC's Future Quest and Kurt Busiek's Astro City.

So is anything being published now that would appeal to me, now that you know a little about my tastes? I probably need to keep it to only three or four books a month (STILL twenty bucks' worth!!!) Let me know your opinions, yeah?

*Yeah, I know that neither Spider-Man nor Batman could get around by swinging from rooftop to rooftop. Who cares? It's a COMIC; I willingly suspend my disbelief.

The Silver Age Fogey (he's back!)

I don't buy monthly books anymore, so I can't help. But welcome back!

Okay, Eric, specifically for you...

THE MARVELS by Kurt Busiek and Yildiray Cinar. 12 issues, now completed (but the tpb ought to be out any day if it's not already).

SUPERMAN: SPACE AGE by Mark Russell and Mike Allred. So far only the first issue (of three) has been released.

Both of these series (one from each of the "Big Two") are thoroughly modern but with a real "Silver Age" feel.

I don't want to overload you with suggestions. Those are the two best for you.

Welcome back, Fogey! You were missed!

I'll second Jeff's recommendations, and note that Astro City has returned to Image Comics with a new series by Kurt Busiek and Brent Anderson, and the back issues are in the process of being collected in new editions.

In addition to Astro City, I would recommend the collections of Saga and Ahoy's Wrong Earth. As for ongoing Big Two series, I recommend Mark Waid's Superman-Batman: World's Finest.

Eric,  my ch like yourself I haven't read anything new in years. I think Marvel and DC have been digging bottomless pits for themselves for many years in terms of not committing to creating content aimed at younger readers(6-18) and also making comics so expensive that they're out of budget for anyone who isn't a dedicated comics fan.  Not to mention how difficult they are to get if you aren't in an area that has a comics shop.

That being said,  there is a group of professionals who are committed to reaching out to younger readers and actually understand the business of making and selling comics,  and that's the Japanese. Print comics are a huge business still, they're easy to find, and the readership constantly turns over,  hence no writing for a dwindling audience of 40 year Olds.

The prime demographic is shonen,  of boys aged 12-18. There are plenty of manga on so many different subjects -- you definitely have your long running battle Manga like DragonBall,  Bleach,  One Piece,  etc., but sports, comedy and romance also do well.

For the most part,  I would say these are written with a mixture of Silver and Bronze Age sensibilities. Also,  most Manga are separated into arcs,  so it's basically one long story.

While I don't read a lot of manga,  I do watch a lot of anime, many of which are created to advertise the Manga. I would make the following specific recommendations:

My Hero Academia - it's set in a world where 90% of the population has some sort of meta human power. Some of those powers (or "quirks" as they call them) are more useful than others,  and there are what are known as professional heroes who are paid by the government to fight crime the police can't handle.  And of course there's a school where said heroes are trained. It reminds me very much of the Legion -- there are even analogues for Bouncing Boy and Matter Eater Lad.

One Punch Man - while this is essentially a parody comic,  there's plenty of action.

It's another world where there are professional superheroes. In this one,  however,  heroes are ranked based on their abilities.  You hace lowers tier heroes like Mumen Rider(liter guy who rides a bike around and tries to help and protect people)  and S tier heroes like Genos who fights literal giant monsters. Enter our hero Saitama whose super power is to defeat any adversary with one punch.

One Piece - this is a long running adventure Manga that also has a lot of fighting.

In this world there's something known as Devil fruit. If you eat it if will give you super powers,  but you'll never be able to swim again. There's also a lot of water and islands and a legend of a pirate who left the greatest treasure ever -- the one piece -- somewhere on an ocean called the grand line. Monkey D.  Luffy,  a devil fruit User who can stretch,  decides to become a pirate himself in order to search for the one piece. This Manga has been running since the mid 90s so its a heavy commitment.

There are pros and cons to Manga.  Color is rare, most of the protagonists are teenagers and there are cultural differences between Japan and the US that will probably seem odd, but I think the style will be appealing. Also,  you won't get crossovers and most stories go from beginning to end with the same creators. Not to mention that there are many sample chapters available on the internet for free,  and digital subscriptions are significantly cheaper than US comics.

I'm sure you were looking for recommendations of US comics,  but I thought I'd give you an alternative.

I think so, but outside of what others mentioned above, I don't think I have anything else for ya. I enjoy a lot of books, but mostly what I enjoy the most are non-superhero comics these days.

I'll second Richard Willis's recommendation of AHOY! Comics' The Wrong Earth. If you're unfamiliar with it, Dragonflyman of Earth-Alpha changes places with The Dragonfly of Earth-Omega. (Think of the Adam West Batman changing places with Michael Keaton's.) There have been three mini-series and five one-shots so far. Be sure to start with the first one.

Randy - thank you for the extensive description. When I have tried manga, it hasn't been to my taste, but I can certainly check out your recommendations; I know a library or two!

Jeff, I have a list of your suggestions to get. I'll see what they have; thanks for the suggestions!

I did see one book of interest; has anyone read "Fantastic Four Full Circle" by Alex Ross? That looks intriguing. And I will probably always be a sucker for the Fantastic Four.

Fantastic Four: Full Circle was solicited for August 3 but hasn't shipped yet.

Be sure to let us know which titles you try and what you think of them. 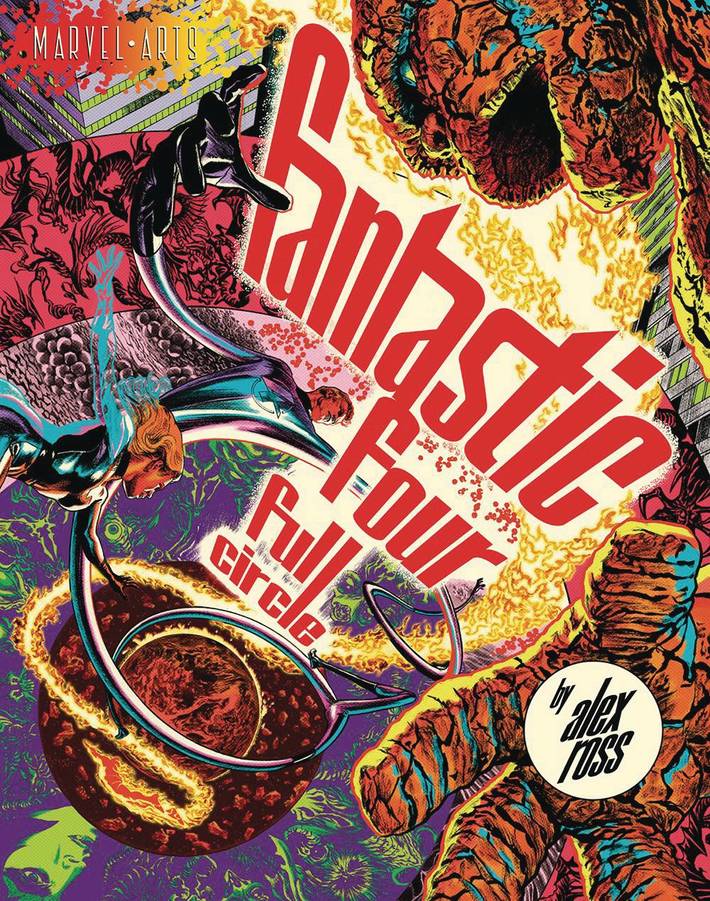 It's a rainy night in Manhattan, and not a creature is stirring except for... Ben Grimm. When an intruder suddenly appears inside the Baxter Building, the Fantastic Four - Mister Fantastic (Reed Richards), the Invisible Woman (Susan Storm Richards), the Human Torch (Johnny Storm), and The Thing (Ben Grimm) - find themselves surrounded by a swarm of invading parasites. These carrion creatures composed of Negative-Energy come to Earth using a human host as a delivery system. But for what purpose? And who is behind this untimely invasion?

The Fantastic Four have no choice but to journey into the Negative Zone, an alien universe composed entirely of anti-matter, risking not just their own lives but the fate of the cosmos!

Fantastic Four: Full Circle is the first longform work written and illustrated by acclaimed artist Alex Ross, who revisits a classic Stan Lee-Jack Kirby story from the 1960s and introduces the storyline for a new generation of readers. With bold, vivid colors and his trademark visual storytelling, Ross takes Marvel's first team of super heroes to places only he can illustrate.

Welcome to the Negative Zone. And introducing Marvel Arts - an exciting new graphic novel collaboration between Marvel Comics and Abrams ComicArts - where nothing is impossible and anything can happen!

Lee Houston, Junior replied to Steve W's discussion A Cover a Day
"I guess medical comics can cover many genres. (Image courtesy of the Grand Comics Database.)"
11 hours ago

Irma Kruhl replied to Steve W's discussion A Cover a Day
"I loved the Mary Robins RN serial, with all that great John Romita Sr. art. The Mary Robin stories…"
12 hours ago