Someone in CBG noted years ago it rhymes with "pickle my knee".

I've never heard his name said out loud, so I had no idea.

Like many of us, I didn't know how to pronounce Magneto until I went to a convention.

I've heard Stan pronounced it differently but switched to the way everyone else said it when he saw no one was saying it the way he did.

Someone in CBG noted years ago it rhymes with "pickle my knee".

I remember Shooter once used that "pickle my knee" mnemonic in Bullpen Bulletins. Problem with that, though, if I were to say that sentence (never mind what it might mean), I would accent the last word: pickle my KNEE. I thought he was saying it was pronounced mickle eye KNEE.

Here's another one: "Trimpe" rhymes with "shrimpy."

Who here used to think it rhymed with "shrimp"? I can't have been the only one.

You can relax Ronald, you are certainly not alone.

Loki being Lowk-Eye was one of my own for decades before the Avengers film!

If there was a wrong way to pronounce DC I'd use it.

Who here used to think it rhymed with "shrimp"? I can't have been the only one.

I think I pronounced it LOCK-EE until I saw the 1960s cartoons on TV.

I saw at least a few episodes of the 60s cartoon before it was cancelled but somehow mispronounced Loki until he turned up in Spider-Man and His Amazing Friends in an episode that didn't make a bit of sense and said Ymir stole the rulership of the ice giants from an ice queen. 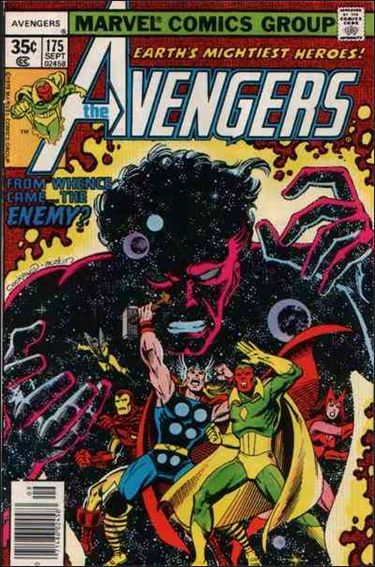 “The End...and the Beginning!"

Thematically similar to next issue's cover - I much prefer this one - there is a drama and menace from the bad-guy figure here that is almost cartoon/childish in the next one.
It should be noted that Dave Cockrum is back for this cover, he draws a great Thor and Vision doesn't he - always great to see a Yellow Jacket cover appearance too. Cockrum's artistic licence on the Enemy/Korvac/Michael, especially facially, does jar with the interior but adds a demonic flavour to the mix that I like.

Inside and the action picks up straight away from last issue's destruction of the Collector - still with the mediocre Wenzel artwork but now with David Michelinie's dialoging the team. (we all know how to pronounce that now don't we).

While they're there the Avengers try to use the Collectors technology to determine who the/their 'Enemy' actually is - and come up blank - but they do discover time machine technology which finally explains how Thor has been pulled backwards and forwards in time to help the team since we all started noticing (or from about Avengers #151).
I always quite liked that plot detail and it does help in boost Thor's strategic importance to the team.

That time-tech is then used, on his request, to send the Two-Gun-Kid back home to the 1800s - as he just hasn't felt like he's fitted in.
This also ties up a loose end leaving readers (or just me?) thinking - 'so what was all that about?' as there has always felt like some promise behind the Kid's movement to the present and his virtual team-up with Hawkeye but it never appeared to blossom.
I am sure I read there was a potential spin-off planned with those two - which never emerged and I remember their guest appearance in a  Champions issue which almost heralded their own series but by this issue the editorial decision is finally reversed and Two-Gun returns home. In view of their time together, Hawkeye's goodbye scene is a little short but at least it is addressed..."--It's been fun"

(So i'll accept a 'Special Reserve / Honourary Status' for the Two-Gun-Kid's official Avengers membership for his part in this tale - but I don't accept he actually was given full-member status.)

These plot points dealt with and the Avengers teleported back to town - in various precarious positions our attention is returned to Michael.
In their suburban home we learn how Carina now supports Michael's stance on the Universe, so much so that she betrayed her father the Collector who's agent she originated as and we get a fleshed out recap of how she joined Michael and how Michael developed out of his past self as Korvac - thanks to Galactus's mothership and some power cosmic.
It is a re-telling of information we had already gleaned but quite a welcome scene as things had been getting quite convoluted. hadn't they?

At the Mansion, the large grouping of heroes scratch their collective heads wondering how to progress - and Ms Marvel arrives having had a 'seventh sense bulletin' she may be needed.
(Whatever happened to Carol's 'seventh sense'?)
Moondragon defends Ms Marvel when Hawkeye wonders is they need her, ( - so was Moondragon actually behind Carol's 'bulletin'?- hmmm?) and the Avengers descend into bickering chaos as they have so many times before, Quicksilver insulting Jocasta and the Vision arguing back...

I know we're supposed to hate him now but there's something about Pietro's putdown of the Vision that made me smile - (is that wrong of me?) - "Yes, you would defend her! Marrying my sister didn't make you any more human than a digital watch!".

Iron Man wonders how he can control the many heroes and yet appears to be managing quite well as he breezes through a scene with Wonder Man and Ms Marvel.
Those two were always getting hinted at for romance - which never really developed and that's a kind of a shame I think.

While facing the fact that the Government via Gyrich have removed most of their own technology Iron Man (thanks to Jarvis) turns to the guardians of the Galaxy for their help in searching for the Enemy/Michael and while we are reminded that Starhawk has been turned off by Michael from detecting him, it looks like there might be a chance of a confrontation to come.......and the issue ends.

This entire issue is basically a draw-breath and set-the finale up.

Exposition scene after exposition scene with no real action at all, quite a departure for monthly comics in those days but when read as a whole, i.e as part of the trades covering the entire 'Korvac Saga' it does serve the story well as a consolidating issue preparing for the action to come...next issue.

It turns out that a six-page Hawkeye and Two-Gun story was created and actually published. It was buried in the mostly-reprints comic

Bring On the Back-Ups: Hawkeye and the Two-Gun Kid

Thankyou so much. Who would have thought I should have bought that Pet Avengers stuff?

It turns out that a six-page Hawkeye and Two-Gun story was created and actually published. It was buried in the mostly-reprints comic

Bring On the Back-Ups: Hawkeye and the Two-Gun Kid

Thankyou so much. Who would have thought I should have bought that Pet Avengers stuff?

Reading your write-up on Avengers #175, I took a shot and Googled "Hawkeye and Two-Gun" and got really lucky.

It's a little (a little?) hard to believe that the two of them riding along in the middle of nowhere would stumble over the underground lair of an under-rated super-villain.