Much as I spat venom at Falcon, I welcomed Ms Marvel as one of the few females 'worthy' of membership.

After a couple of years of doing this and over 80+ issues discussed - I know I SHOULD know but -- does the Vision actually fire eye-beams as he does on this cover? I kind of expect any blast to be from his forehead jewel and just think this looks wrong but I've flicked through my current available Avengers stuff and I can't be sure either way.(Anyone?)

In his first appearance, he fires beams from what he calls his "thermo-scopic eyes." I don't recall him using that power too often though.

I thought it unusual.

In his first appearance, he fires beams from what he calls his "thermo-scopic eyes." I don't recall him using that power too often though.

I wonder how different her fate might have been if she had joined the Defenders or the Champions.

Much as I spat venom at Falcon, I welcomed Ms Marvel as one of the few females 'worthy' of membership.

If she'd joined the Defenders she probably would have ended up like Gargoyle. 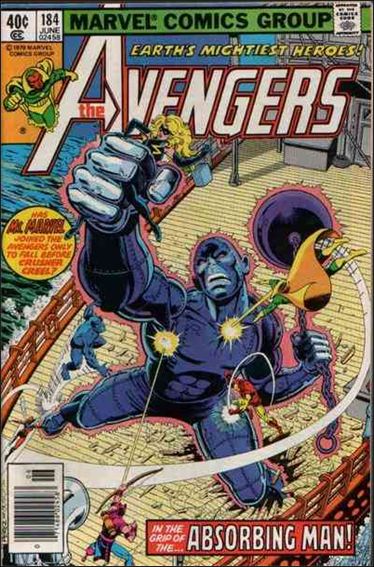 “Death On The Hudson!"

Perez moves his cover from last issue on the dockside onto a ship deck for kind of a same-again this issue, Ms Marvel gets a cover mention and does anyone else get a Fantastic Four #1 vibe?

Important point regarding the cover - this is the last image of the Vision alone symbolically on the corner box before the (wonderful) beginning of the head-shots roll call beginning next issue that lasts for a long while.

We open inside as we left off with the engine-turbine-powered Absorbing Man facing down our team.

Note this issue has a variety of inkers over Byrne, whilst none of it jars it does feel less polished than previous and following issues.

Nice scenes are the one where Ms Marvel doesn't need the Beast's help - rather he needs hers - and the Vision wielding the ball and chain is a great look.

Back at the Mansion, Cap brings the Falcon in, hears of the battle and despite Gyrich's protestations, both Avengers race off to help,
"Geez, Cap, this being a token's starting to wear pretty thin pretty fast."
And so say we all.

Hawkeye's thoughts? - "That's the guy who's taking my place in the Avengers, eh? He doesn't look so tough to me"

Surprising most of the team, the Beast toys with Creel by spinning him and preventing him using his power but know-it-all Cap blunders in.....and his shield's secrets are absorbed!

As the Avengers fight, Sandy (from last issue but in green not orange of the cover - remember?) gets herself used as a hostage again!

Enigmatic as always (love the use of the cloak) the Vision battles Creel and manages to get Creel to absorb his becoming intangible ability so Creel falls into the sea.
Deciding he has lost, Creel allows himself to disperse into the water and away...(into Hulk #261 next.)

The danger over, Sandy and the Avengers wonder how evil/misunderstood the Absorbing Man was and we fade out the issue.

So not much here other than the fight itself. A little more of the Falcon not fitting the profile of the Average Avenger and an acknowledgement that Ms Marvel does in her first official outing.

Quality art and classic heroes - I really enjoyed this Absorbing Man two-parter, never that high profile but a perfect example of how everything can work in an Avengers issue.

This was actually my first time seeing Creel and I thought he worked out well.

There was some criticism over Sandy's sadness over the Absorbing Man's fate because he was kidnapping her for "companionship".

Which is both ironic and foreshadowing with Ms. Marvel's appearance here!

Well done two-parter.  Creel has gone toe to toe with Thor many times and the Hulk a few as well but I'm still impressed he holds his own against a whole team of Avengers.  Michelinie does not delve into it too deeply here but in terms of teamwork this was not the team's finest hour.  Ms. Marvel is used to working solo; Hawkeye and the Falcon are both a little bitter and don't have their heads in the game; the Beast is clowning too much.  Even Cap blunders, uncharacteristically hurling his shield without thinking.  There was little in terms of a coordinated attack until almost the end of #184.  Meanwhile, while the end was meant to come across as tragic, did anyone other than Sandy think Creel had committed suicide?  That would have been heavy but given his powers I doubt many readers thought this was the last of the Absorbing Man.

Art-wise, we are still in a good to very good (tho not quite great) era for the book in my opinion.  I like the Byrne/Janson combination for the reasons you state Richard.  I was a bit surprised #184 had so many inkers as to my eye it look fairly consistent.  I've seen plenty of comics from this era with multiple inkers - a number in this series - and the finished product has wildly varying quality throughout, not here though.  I wish the book had Janson consistently, or someone like Terry Austin over Byrne's pencils.

I remember a story in which the Sandman was in the ocean and managed to reincorporate himself. The Absorbing Man was created using Loki's magic, so if anything he would be more likely to survive than not.

He also tried to stop his fall from a building by grabbing at falling wood or brick or steel and accidentally grabbing a piece of glass. Shattering into a million pieces didn't stop him for too long.

There was also the story where Creel chases Thor through a mall  until they get to the store Thor's looking for (ignoring the safety of the shoppers of course.) He finally throws his hammer at Creel, who catches it, laughs, and punches Thor in the face. His arm folds up like an accordion and Thor tells him he led him to that store because he knew they sold cardboard copies on his hammer there, and that's what Creel just caught. (He holds the hammer up so Creel can see it says MADE IN JAPAN.)  He wraps him up in cardboard and warns the police not to unwrap him until they get him to a special cell. As they take him away one of the officers jokes that Creel literally can't punch his way out of a paper bag since every time he touches his prison to try to break free he turns back into cardboard.