The soft links to the annual, Thor and Marvel Premiere represent the kind of easy, casual continuity not seen so much anymore in the current “write-for-the-trade” atmosphere.

"Where does destiny take Captain America and the Falcon?"? I dunno. Secret Empire?

Hawkeye received so many "solo" covers in The Avengers that I'm still shocked that he never got his own Marvel Premiere/Spotlight run! 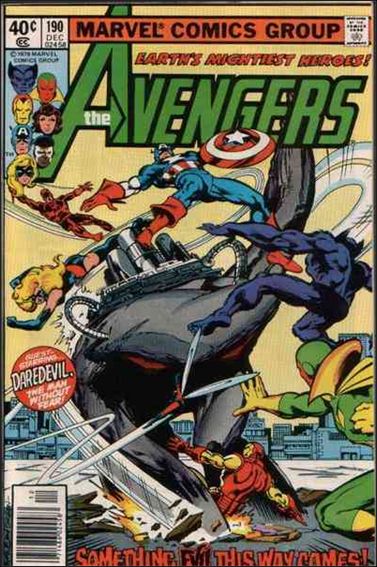 Now that's a beautiful cover, strangely reminicent of the Absorbing Man one #184 but I'm not really sure why?

Nice to see Ms Marvel back on the cover but a shame the Falcon misses another cover appearance.
The cover corner box contrasts with the rosta on the splash page - that has the Scarlet Witch within the list.

That splash opens into a meteor landing and a strange stoney/alien lumbers into town....kind of like an update of War of the Worlds.

The court fiasco is to justify the Avengers Government clearance or otherwise and opens with criticism of Captain America's involvement in #228-231 of his own mag - much to the Falcon's distaste,
"It's all right Falc -- calm down!"

As the arguments continue, a S.W.A.T team is outclassed by the rock monster...
Gyrich brings up Hawkeye's treatment of him we all laughed at back in #172 which rewards the faithful reader.
The Avengers get a request for their help due to stoney-guy which Gyrich claims is a ruse until it's confirmed via TV and the Beast shows him up for the stuffed shirt he is and even Gyrich has to concede the team is needed, "All right! You win! Go!"
It is a watershed moment, revisited many times again over many years to come but the main point is illustrated here -- "I'd say Mr Gyrich has just suffered a severe blow to his credibility!"

Guest-star Daredevil joins the Avengers as they face off against this new menace.
DD's guesting is a bit odd - they never really needed alter-ego Matt Murdock in the court situation and he just kind-of fits it to the battle rather than take the limelight like most guest-appearance seem to.
It is such a 'he fits in' vibe that this almost seems like a try-out to see if DD might actually join the team.....which of course he doesn't. (For many many years).

The battle against the mystery monster goes well, a thrilling combination of the Vision and Iron Man's strength finally seems to dispatch him - leaving a pile of rubble.

Daredevil detects an unexpected heartbeat and suddenly he and Iron Man are ...changed to stone!

Everyone quickly realise what is going on and who they are really facing as we hit the powerful cliff-hanger...
"But Thor told us you were dead!"
"Perhaps I should be... but that's another story! In the meantime... for freeing me from my makeshift life-support system, you have the thanks of the Grey Gargoyle! And now, Avengers... I shall Kill you!"

It's a great revelation with precious little clues before hand, the readers thinks the twist away from a Gyrich victory and the extra of Daredevil guest-starring is enough for this issue to feature.
It is quite a surprise that the Avengers have never actually fought this member of Thor's rogues gallery before isn't it?

The art continues to be beautiful, the line-up of Avengers are classics and there has rarely been a better era - has there?

I love  these books

This may have been the first time that we learned about Tony Stark's parents . . . .

I'm rejoining this party late, sorry about that, so this is old information, but Howard Stark first appeared, by name, in "The Controller Lives", from Iron Man # 28 (Aug., 1970).

Maria Stark's first name is revealed in the story "Triad"---Iron Man refers to portraits of his parents by their names---from Iron Man # 104 (Nov., 1977),  This was roughly eighteen months before The Avengers King-Size Annual # 9 came out.

It was nice to see Gyrich defeated, but his attitude continued on in the X-men and he quickly became the poster child for government villainy.

It always appeared to me that Marvel just didn't want Daredevil with the Avengers. He had guest-starred several times prior to this but used the usual excuse of "Too-Many-Heroes-Would-Mess-Up-My-Radar-Sense" cliché! And he didn't want anyone figuring out he was blind!

No, that wasn't it. Part of Daredevil's advantage was that people thought he was sighted.  It enabled him to surprise the bad guys in various ways, e.g., not being blinded by bright lights or fooled by optical illusions or subject to hypnosis. Additionally, if DD's enemies knew about his other, enhanced senses, they could come up with methods to foul those senses.

Next to his civilian identity, the fact that he was blind was the biggest secret DD had. So why risk it by telling the Avengers or getting close enough to them for any of them to figure out?

Maybe, maybe not but it was his greatest secret. No one, not even his closest ally Spider-Man knew that he even had super-powers.

It certainly would have given away his true identity as Matt Murdock was already linked to the Man Without Fear!

Maybe, maybe not but it was his greatest secret. No one, not even his closest ally Spider-Man knew that he even had super-powers.

It certainly would have given away his true identity as Matt Murdock was already linked to the Man Without Fear!

Excellent point, Philip!  As long as Daredevil's blindness is a secret, if anybody who wanted to ferret out DD's secret identity would have to consider hundreds of men of a certain age in athletic condition.  But if the identity-hunter knew that DD was sightless, then it wouldn't take much of a leap to figure that he'd be a blind man in his civilian ID.

And, as you said, Matt Murdock was already linked to the Man Without Fear.

As long as Daredevil's blindness is a secret, if anybody who wanted to ferret out DD's secret identity would have to consider hundreds of men of a certain age in athletic condition.

Of course, Matt Murdock wouldn't be one they would consider at all because of his blindness. More security for his identity.