Well, you know... I was asking myself that very question as I read your synopsis. I determined I didn't have anything to add, so I thought I'd just post Englehart's comments. Don't worry, though... I'll have plenty to say about some of the issues to come, especially when it comes to... no, no... mustn't get ahead of the discussion.

Having missed GS-A#2 when I first read this issue, it was a bit of a stunner to discover the Swordsman now dead and Hawkeye back in the fold and having only started reading the Avengers shortly before Hawkeye quit and MTA not being yet too far along in Hawkeye having first joined in the reprints, I had little experience of Clint having been in the fold for years, but it was still fun to have him back!  This was also my first encounter with the Radioactive Man, the Crimson Dynamo and Titanium Man, although I'd seen ads for the latter two's appearance in the Iron Man mag wherein Janice Cord died -- I've still never actually read that particular issue, tho'.  Interesting that Iron Man's beef with C.D. has nothing to do with Cold War politics but everything do with wanting to avenge he holds C.D. & T.M. responsible for.  But in Vietnam, just before the fall of the South Vietnamese government, he has no authority to do anything and it is the Thunder God who has to cool down his colleague's rage, much as Thor might have sympathized with Tony.  Guess Thor did learn some humility from Odin's old punishment for having broken a treaty and being transformed into a mortal with no memory of his Asgardian heritage.  Not to say that if these guys had been responsible for killing Sif or Jane Foster, that Thor would have restrained himself from hammering them into little metal boxes!

Considering how popular slasher movies have been Marvel didn't think they should have a character keep that name? I've never seen him in any other stories. Where does he appear after this?

According to the Official Guide to the Marvel Universe, this is the same Crimson Dynamo that was in love with Janice Cord, who was killed by Titanium Man in Iron Man#22, so it's really strange that he'd agree to work with him. The Guide also says not long after this the Titanic Three broke up and he turned to the Soviet Union, where the armor was taken away from him and he was thrown in prison. So forming this team only delayed the inevitable. And the Dynamo in Champions was somebody else.

Sal Buscema has done some good work on other titles. He needs another inker.

I really don't like the way the Swordsman is treated. "The Swordsman was a loser to the last moment of his life." And we haven't even gotten to his body being stolen by the woman chasing tree yet.

But in Vietnam, just before the fall of the South Vietnamese government, he has no authority to do anything and it is the Thunder God who has to cool down his colleague's rage, much as Thor might have sympathized with Tony.

Well, unless invited to be there and specifically given authority the Avengers really have no authority anywhere outside the U.S., where presumably they've been given authority. The Titanic Three have apparently (according to them) been given authority by the occupying forces of North Vietnam in the parts of South Vietnam that they had successfully overrun in 1972. In 1973, following peace accords, what remained of the U.S. military were withdrawn. Only small numbers of advisers and embassy staff remained.

When the Titanic Three show up in Saigon they have no authority. The comment is made that the South Vietnamese president can't prove they are supporters of the communist forces. Since two were agents of the USSR and one of "Red" China there wasn't that much to prove, and their standards of proof weren't the same as ours. If they waltzed into Saigon in 1974 they probably would have been attacked by tanks and artillery.

Valid point, Richard!  Of course, the government of South Vietnam would have been very happy if Thor and his super-powered friends helped them out against the communists, but comics writers have always had to tread rather light when dealing with real world events especially when they want their imaginary world to mostly share the same history as the real world, except with super-powered characters.  Hence, aside from a one-off tale separate from the standard Superman chronicles, the Man of Steel used his amazing powers to stop petty criminals but didn't even try to apprehend Hitler, Mussolini, Tojo or Stalin circa 1940 when they were each already responsible for horrendous crimes against humanity.  Decades after WWII, Roy Thomas wrote a story in which the original Human Torch kills Hitler -- just before that madman was about to kill himself anyhow and after his regime had already brought about the murders of at least 20 million people, maybe as many as 40 million (the latter including the higher estimates of Soviet citizens, Jews and non-Jews, slaughtered by the Germans and their allies over the course of the war).  Alan Moore, of course, took a bolder tact by having Dr. Manhattan win the Vietnam War pretty much single-handedly, but then part of Moore's purpose was to show how profoundly different a world with even just one vastly super-powered being would be from the world we live in.

Decades after WWII, Roy Thomas wrote a story in which the original Human Torch kills Hitler . . . .

Actually, writer Hank Chapman gets the credit for that, when he depicted the Torch incinerating Hitler in his bunker, in the story "The Return of the Human Torch", from Young Men # 24 (Dec., 1953). 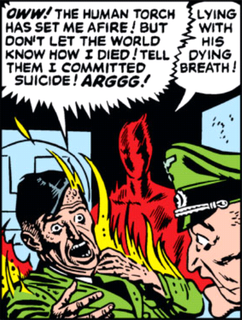 Roy Thomas simply amplified the scene when he inserted it into What If? # 4 (Aug., 1977).  Mainly, he provided a justification for the Torch fricasseeing Der Fuehrer, rather than just doing it outright, as it seems in Young Men # 24.  Thomas even re-uses some of Chapman's dialogue in his version.

"Don't tell the world that I was killed battling a super-powered android! Tell them I committed suicide! That sounds more epic and heroic!"

I read it was meant to be canon in the regular Marvel Universe, but complaints that Hitler shouldn't have been killed by a fictitious character caused them to later state he died in 616 the same way he did in the real world, and his Torch death only happened in another dimension.

Chapman's story, in Young Men # 24, did not, but when Roy Thomas beefed up the Hitler-death sequence for What If? # 4, he covered that: 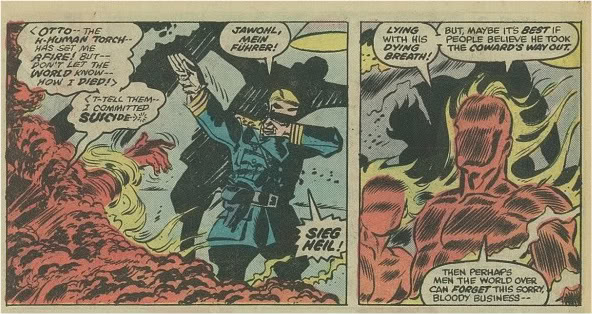 Shows how much the Comics Code changed in the 70s. I remember being surprised at how violent the old stories were back then. I don't think modern heroes (other than maybe Wolverine) killed people like that. He was either mind controlled or a fake, but we're just about at the issue where the original Torch kills Iron Man.

Hadn't realized Roy was revisiting a scene from an older comic, albeit one still published years after the end of WWII.  Not too surprising tho', given Roy's love of the Golden Age superhero comics.

If I recall correctly (and I don't always), at some point during the Norman Osborn, Director of HAMMER story line, didn't Bucky/Winter Soldier/Captain America claim that he killed Hitler?  I thought it was odd that he'd claim credit for something that the Human Torch had done, especially since, assuming that Earth-616 Hitler died at least during the same basic time frame as the one on our Earth, it should have happened after Bucky & Cap "died", but before Bucky was fully converted into the Winter Soldier.  Maybe the Winter Soldier killed one of those pesky Hitler clones in Brazil or something?  Clearly, that was just another attempt to support the ret-con that Bucky was this bada$$ "black ops" agent from the beginning, and not the character from the original comics who spent even more of World War 2 either tied up or strapped down than Wonder Woman...