I've sat through the NEW 52 and only bitched a little. I'm actually enjoying most of the Marvel NOW books. I understand that books are written for me exclusively, and when I don't like a book, I normally walk away from it quietly without much grousing.

I want to make that clear so that when I say I HATE the first issue of AVENGERS ARENA, you know I mean it.

I don't care what the second issue, or the third, or the fourth, fifth, sixth or tenth bring--I'm out. If I saw this book lying on the floor of my living room, I'd scold my dogs for abandoning their house training.

I read #4 today (grabbed #5 yesterday, haven't read it) and I liked it. I know none of these characters. I'm not sure, but I almost get the feeling that's what the writers are banking on. I think if you loved Reptil, this probably would have been far more tragic. But as a story about teenagers murdering each other, this isn't so bad. The art was nicely supplied by someone with the last name Vitti (I've seen this name on Secret Warriors before...) as a fill-in for Kev Walker. Dennis Hopeless makes me actually care for these characters who have two things going against them in my eyes: 1.) they're teenagers, and 2.) I don't know who they are.

But somehow, I end up kind of rooting for some of them, at least.

Man, this morning I read the latest two issues and immediately wanted the next one in my hands right then. My favorites right now are Bloodstone and Death Locket, despite the horrid name of the last one. It's still not as awful as Anachronism. But I felt the kids' frustration at wandering around almost aimlessly in this horrible world.

Kev Walker's art is fantastic. Loved the image of Cullen Bloodstone after he found the guns... 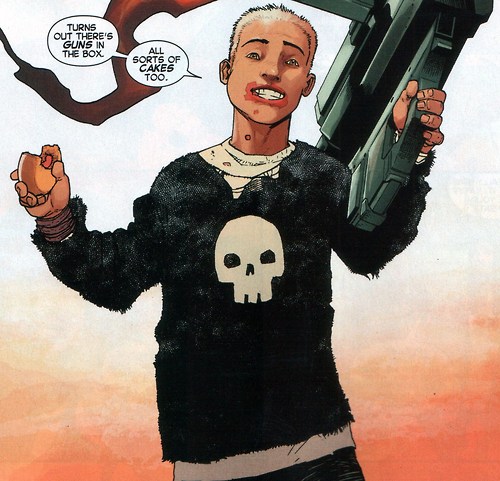 ...as well of this one of Death Locket:

This book is better than it has any right to be.

You're not the only one enjoying this, Jeff. I bought the first issue more out of morbid curiosity than anything else, read it, and thought, "Well, that was a comic. Guess I can file it away now."

But an interesting thing happened when issue two came out; I found myself grabbing it off the shelf and putting it in my stack. "I'm just curious about how it follows up the end of issue 1," I thought. So I read that one, too, didn't hate it, and thought, "Okay, two comics, not bad but I don't need to keep at this. Guess I can file it away now."

Repeat with the next two issues, and I finally had to admit to myself: I'm enjoying this comic. It's not a violent gore-fest, which is what the premise could have been (although the Anachronism/Kid Britain scene in this last issue...whoa). The Arcade power-up, which Rich complained about upthread, is still a mystery, but outside interviews with Dennis Hopeless have guaranteed that this is not a random change or editorial oversight; there's (he says) an in-story reason for the change, that will be revealed soon.

I'm really curious to see what's going to happen between Chase and Darkhawk, I'm pleased as punch to see Cammi from the Annihilation books, and I'm hoping we haven't seen the last of Juston and his Sentinel. Ultimately, I don't think this comic has much likelihood of being the book readers feared it would be based on the advanced solicitations, or even the first issue.

And I totally agree that Kev Walker's art is a GREAT asset for this book. Well implemented throughout. This is good comics.

Just saw that the next issue comes out this week! Pick it up if you haven't yet. Should be a good time for all!

Why is Arcade now powered up to the point where no one can touch him?  Not explained.  Not even hinted at.  All we get is "I'm tired of being a joke, so now I'm not."  B.F.D.

For any who are actually curious, today's issue, #7, is all about how Arcade got his power-up. I don't know that it will satisfy anyone who decided from the word go that they weren't going to like this book, but I didn't find it objectionable at all...

I read #9-10 of Avengers Arena today, and this is easily one of the books that I look most forward to every month. There is something to hate about all of these characters, and something to love about some of them. It's those characters that you really end up pulling for.

And there is a hint in a previous issue (the "origin" one that Alan refers to) that this whole thing may be more of a hoax than what any of them are thinking.

Permalink Reply by Richard Mantle on June 24, 2013 at 4:35am
Interesting thread here. I am tempted to buy the trade. But WAY more interested to know how Rich Lane who started all this feels about the comments? Rich?

Rich is a friend of mine (albeit just an internet friend--we've corresponded for 10+ years now), and I think it's safe to say that his mind hasn't changed, if only because he hasn't read any more of it.

Cap used to have a saying that I haven't seen around here in awhile: "That's what makes horse races." It was pretty much the Legion of Superfluous Heroes' way of saying, "To each his own," or "Different strokes for different folks."

My own tastes have, at times, matched up exactly with those of Mark Sullivan (back when I read almost exclusively Vertigo titles) to Rob Staeger (when I read a lot more mainstream DC titles) to Doc Beechler (whom I first met on the Dixonverse message board before he jumped that ship, and then advised me to come over here too...). Now it seems that no one really matches up to my tastes on this board anymore, but that's what makes the world go round. Maybe Alan Minarik would be the closest right now, but who knows, that could be just because I met him for beers a couple months ago and we discussed many comics.

But the fact is (bringing this back home, sorry) that Rich probably has moved on, having grown tired of hearing people praise this title he so reviles. I, for one, am WAY more interested to hear what YOU have to say about it once you've read it, Richard Mantle! So why don't you give it a read, then come back and jump into the discussion? We'd love to have you here.

Apparently, despite the terrible set-up (and whole raison d'etre) of this comic, it is supposed to be quite good.  I hear the characters are appealing and sympathetic, the new characters are engaging and the writing is supposed to be quite good.  In retrospect it might have been fun to follow this from the start.  As it is, I'll be very interested to read this once it's collected properly.

(I've heard about it mostly from a certain comics podcast.)

I too, would love to read a reapprasial from Ricardo, but I'm not sure he even posts much around here these days, despite his name being on the bottom of every page.

It sounds to me like a comic that's treading the dangerous path of being good in and of itself, but possibly bad for the fictional universe at large.

Might I ask which podcast you speak of, Figs? Could it be the Mindless Ones "Silence" cast? I believe it was just about a year ago that you turned me onto that podcast, and I haven't looked back. Those crazy guys have turned me onto more laughter on a weekly basis than I can even account.

I would love for you to read this and report back, Figs.

In the meantime, I can assure everyone that I speak of Rich Lane's disinterest only on account of my own tastes. I don't care for any threads involving 70's sitcoms (pretty much any sitcoms for that matter), pop culture (gag), or Buffy the Vampire Slayer. I'm here to talk comics. I realize this puts me at odds with so many people around here if we're only talking on matters where we all agree on everything. But that's one of the things that makes this board so awesome. Different people from different perspectives.