Batman/Catwoman/Huntress Questions AKA I Was Wondering #32

With the recent news about a big change in the status quo of the rather bumpy relationship between Batman and Catwoman, I thought about their eighty year history and, well, wondered about a few things. Changes in continuity have played havoc with DC's second-longest love story with great expectations falling short. Each shocking twist that drove them apart required baby-steps to reunite them.

Also I thought about poor Helena Wayne who was thrown out with the bathwater of the Crisis as parts of her story cried out to be told. But before we can walk, we must crawl so let's push on!

Hope no one labors over there too much! Awaiting some Bat-answers! 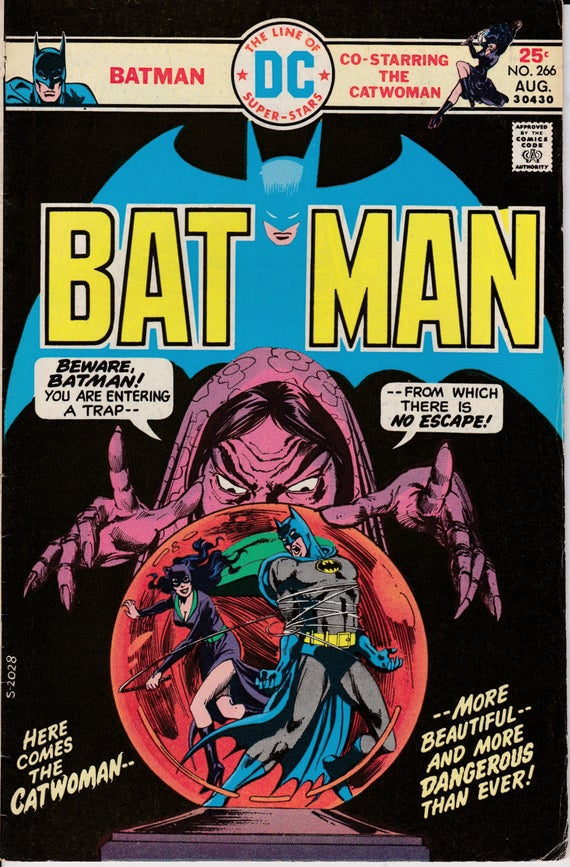 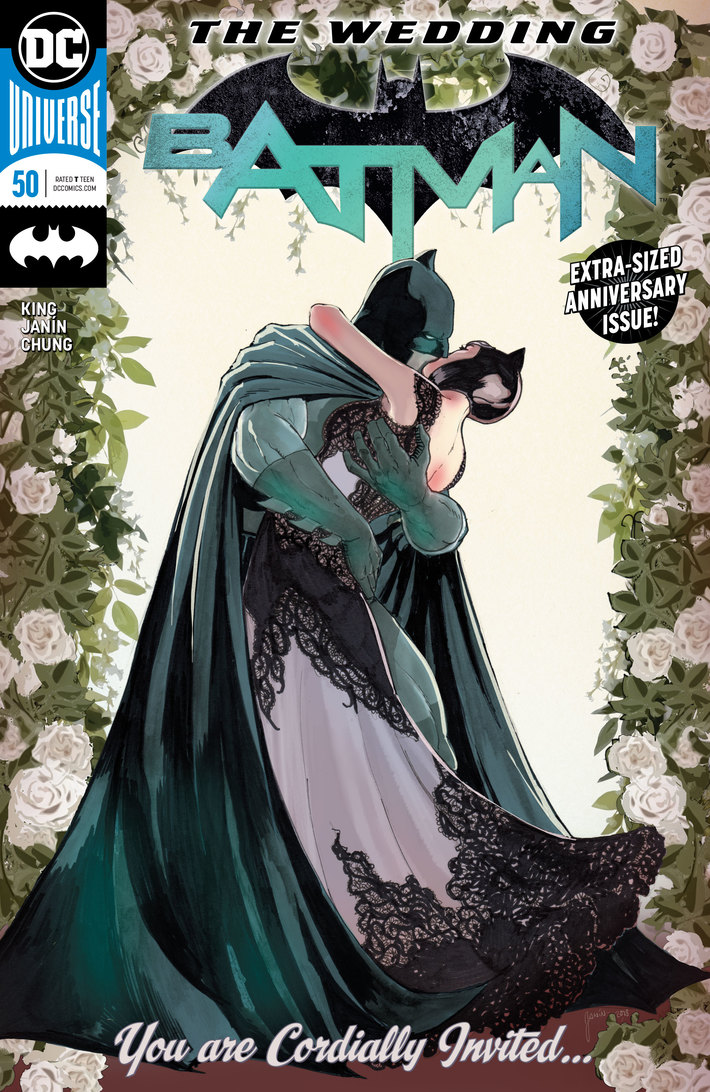 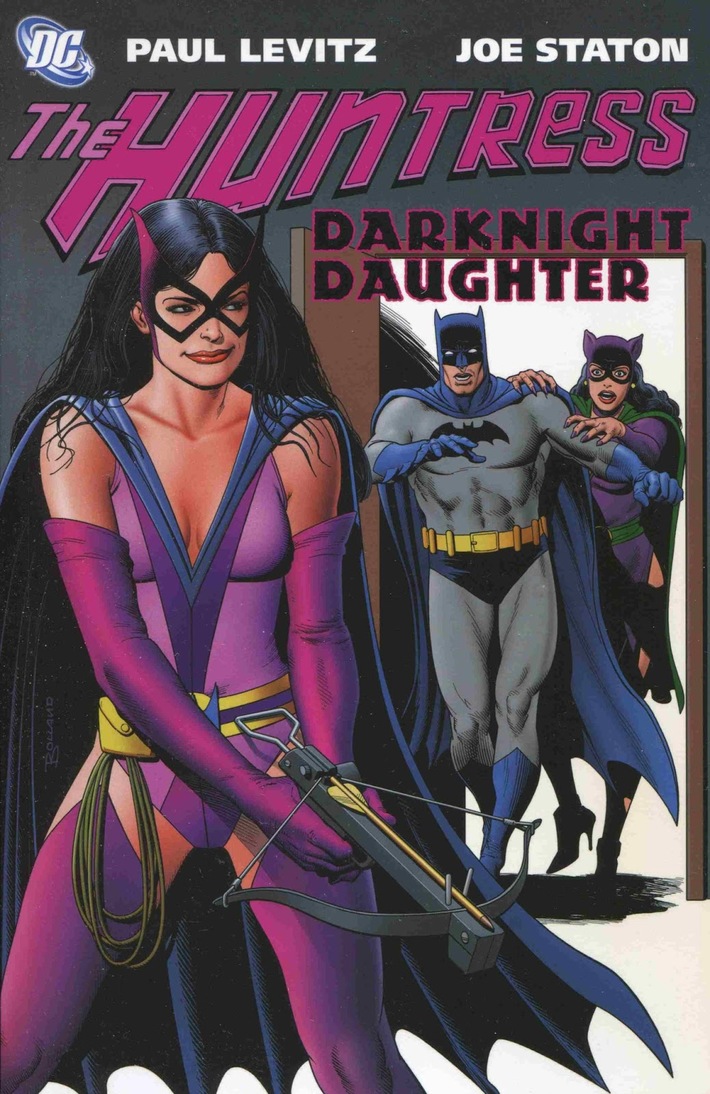 I strongly suspect that you have given all this stuff more thought than the people who wrote it did.

Most of what you're asking is post-Crisis, which is about as ephemeral and temporary as any canon can be. At one time or another, probably every question can be answered both yes and no.

In general, I think Catwoman's non-lethal/civilian-avoiding approach to crime, plus Batman's attraction to her, provided some leeway in terms of the need to capture her. She often sacrificed whatever she was after for the common good, too. So combining the lack of results with the lack of harm meant there was less need to secure her.

I wouldn't imagine how things went on Earth-2 made much impact. They were different people in different situtions. How does one twin react when the other one gets married?

I'd suppose that what went on between Batman and Catwoman was left to them by the JLA. Especially when Batman became the loner/odd wheel in the group, they didn't really comment on his relationships. Same with Robin and Batgirl. I imagine they might have occasionally had some misgivings, but I doubt they expressed them.

I think Catwoman had a fairly strong ethical code beyond not respecting property rights. I don't think their secrets were in any great danger--she knew that would be a nuclear option.

I wouldn't say Harley's love made more sense, considering she's insane and the Joker would kill her as soon as look at her and ultimately dismissed her. Batman is the World's Greatest Detective, I can see how that might have appeal for someone who considers herself the World's Greatest Thief.

Harley's having a moment. Check back in 30 years or so and we'll see whether Catwoman or Harley is a bigger name.

I can't help much with your Huntress questions. I'm not sure I've ever read a Huntress story.

IIRC, in "The Cat's" first appearance, Batman interfered with Robin's attempt to capture the Cat, and then proceeded to discourse about her attractiveness. It's pretty obvious that Robin knows what's up and seems to more or less approve.

There was a recent (last 20 years) encounter between Catwoman and Nightwing where I recall Dick being pretty wary of her motivations. That besaid, he didn't attempt to arrest her.

In the Huntress's original origin, from DC Super Stars #17, Catwoman surrendered to the police and was sent to jail, and Bruce Wayne married her when she'd served her time.

Selina's first period as Earth One-Bruce's ongoing love interest was in the late 1970s-early 80s, when Robin wasn't in the feature. During that period she wasn't active as Catwoman, and was living openly in Gotham. I'm not clear when she learned he was Batman: she didn't know at first. She was moved out of Batman's feature (in favour of Vicki Vale: Catwoman was moved into a backup strip in Batman) at about the point Robin returned. Her second period was in the Doug Moench era, after the introduction of Jason Todd but before Batman: Year One. I've never read those stories. I believe she worked with Batman as Catwoman.

Re whether Bruce Wayne knew Helena was the Huntress: he didn't have that much of a chance to learn. In DC Super Stars #17 she captures the crook responsible for Catwoman's death and leaves him outside police HQ, but her costumed identity isn't seen by anyone other than the crook and she doesn't announce her name. Bruce guesses he was left by Robin; Helena says he has a feeling it was "someone new".

They next appeared in All-Star Comics #69, where Wayne is a key character and the Huntress watches without revealing her presence.

She met the JSA in the next story (#70-#71). By #72-#73 she had enough of a public profile that the Golden Age Huntress had a grudge against her for using the Huntress name. #74 was the last issue of the title. Batman-Two was killed in the first Adventure Comics instalment, in #461. So he didn't have that much time to learn. There's a sequence where Robin reveals to Helena he's figured it out before the adventure gets going.

We know from a couple of issues of the Bat Family book that Helena Wayne felt the need for more training early in her career, and sought Earth-1 Batman for that purpose.

He declined, but put her in contact with Batwoman, who by her turn brought Batgirl (Barbara) to the table.

I don't think that it was ever spelled out, but I perceived the implication as being that Earth-Two Batman was simply the kind of father who insisted that his daughter must have "the best possible" education and had a rather unusual view of what exactly that would entail.  He probably taught her forensics and criminology from a very early age while hardly ever wondering if that might have consequences that he would not approve.

Makes sense to me.  He decided that pursuing an actual childhood and adolescence was not worth the trouble if he could instead shape himself into a crimefighting machine, after all.

Should we expect him to have significantly dissimilar expectations from his daughter?  Perhaps not.

Her decision to go meet Earth-1 Batman at that point in time no doubt had shades of pursuing the approval of her father, or as close a substitute as she could reasonably find.

We are shown very little indeed of her later interactions with Batwoman, but IIRC she admits almost from the very start that she is seeking validation as a crimefighter.  Going to a literal alternate world to find it implies that she has not yet found enough in her own world, and to me that strongly hints of not having  yet found any mentorship there since her father's death.

She would of course soon join the JSA and therefore have access to teachers such as Wildcat, Robin, Doctor Mid-Nite and perhaps even Mr. Terrific, but the implication is that she does not feel ready quite yet.

Actually, it was Batman Family #17.  Quite an informative issue in hindsight.

Helena says outright that her father forbade her from following on his steps - which strongly implies that he expected her to consider the idea, which IMO suggests that he did train her despite his own misgivings.

Another useful story here is "America vs the Justice Society".  Published in late 1984 and early 1985, this Roy Thomas story involves the JSA wondering a lot about what was on Batman's mind in the last few months of his life.  The penultimate page gives a fairly plausible explanation for why Batman would not have found out Helena's double life.  This is a very rewarding read for people with nostalgia for the JLA story up to that point, mind, so I will avoid spoilers and just say that he had a lot on his mind.