Binge Books brings back the Bronze Age with 'Heroes Union' 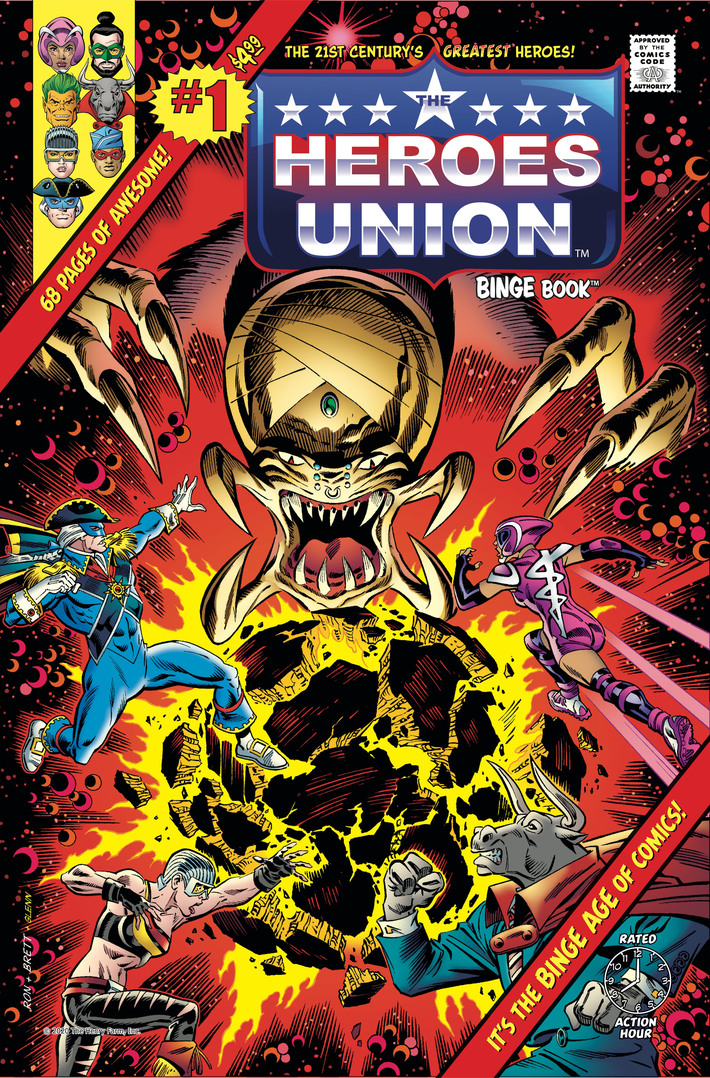 But they’re gods of a previous era, so we haven’t seen much from them lately. Until now. Until Binge Books!

Heroes Union is an Avengers-style story for all ages, told in the Mighty Marvel Style of the Bronze Age of comics (1970s and ‘80s), by veterans of the Bronze Age of comics. It features a team of new superheroes like Blue Baron, Raider and Startup, some of whom have appeared already in digital comics, and some of whom will be hitting print soon. They take on a cosmic menace in a manner that can’t help but bring to mind Marvel’s Kree/Skrull War, DC’s “Crisis on Infinite Earths” and other beloved “events” of yesteryear.

As a 1980s Marvel cover might say of Binge Books, “WHO are they? WHAT are they? WHERE did they get their fantastic powers?” I decided to ask Henry himself the senses-shattering answers to those scintillating questions!

Captain Comics: How did you transition from TV writing to publishing comics? Were you already a longtime comics fan?

Darin Henry: It was less a transition than an addition. As I’ve been launching ‘The Heroes Union,’ I’ve also been writing for an upcoming Netflix animated series — an NDA prevents me from telling more until October. I’ve been writing TV on staff and development full time since 1995 and I have no plans to stop now.

I was a passionate Marvel zombie until about 20 years ago when their target audience stopped including kids. I became a dad a few years later and since Marvel no longer published the kind of new superhero comics I wanted to read to my kids, I decided to publish my own. I could have saved a lot of money if Marvel had just kept publishing “Spider-Girl.”

CC: How do you come by your big names? Did you seek these three men out on purpose, or something less planned?

DH: Re-assembling the classic Marvel bullpen was definitely the plan! Sal Buscema was my gateway artist to the Marvel Universe of the 1970s. He no longer does interior pencils but I’m thrilled to have him drawing covers and doing inks over Ron Frenz’s pencils. I’ve loved Ron’s art since his time drawing “Marvel Team-Up” and it’s only gotten better over the years. He’s an amazing storyteller and Ron and I work together to design every costumed character. Roger Stern’s run on “Avengers” was a perfect combination of costumed superhero and cosmic adventure, so when the premise of “The Heroes Union” #1 began to take shape, I knew Roger would be the ideal writer to shape it and perfect it, which is exactly what he’s done. The Blue Baron will get his own print title on Oct. 27. (Cover art by Sal Buscema, copyright Binge Books)

CC: You’ve opted for the path less traveled in publishing, with 68-page “graphic novellas” that other publishers would likely break into three monthly installments — and then charge three times as much. How did you come by that decision, and how is it financially viable?

DH: We’re in the binge age and there are so many cheaper and more accessible ways to be entertained, and comics can’t compete at winning over new customers — especially kids — without giving potential customers easy access to complete stories at a low enough price to justify coming back for more.

Serialization made sense when comics were sold where new or casual readers of any age could pick up milk every week or two, then stop by the spinner rack and see what’s new. Comic shops, while great for fans, usually require a special trip so it’s a bigger challenge for anyone new to stumble upon comics and keep up with them on a consistent basis. As for my financial model, it’s similar to the TV syndication model where the new books help sell the old books and the old books help sell the new books. The bigger the library of releases, the quicker a new release can pay for itself. CC: Two characters in the Heroes Union, Blue Baron and Startup, have had their own digital comics before. Can new readers pick up “Heroes Union” without having read the previous stories?

NH: “The Heroes Union” is designed to introduce new readers to Binge Books.  It connects all the other series and hopefully inspires readers to check out those other adventures.

CC: What is your publishing philosophy when it comes to superhero comics? Are your books all ages, or aimed at older readers?

NH: I like to say every Binge Book is like a greatest hits of the comic book industry. They have the satisfying format of the Golden Age, the innovation and escapism of the Silver Age, the sophisticated storytelling style of the Bronze Age, with the printing quality of the Modern Age.  The best superhero comics sustain the spectacle that attracts kids with the continuity that keeps adults engaged. Roger, Ron and Sal were making comics back when titles sold an average of 250,000 copies on the newsstand every month.  I believe hiring the people who did it before gives you a slightly better chance of doing it again.

CC: Tell me why I should be reading Binge Books instead of (or in addition to) the other guys!

NH: Binge Book characters weren’t devised in the 1940s or 1960s, they are all-new modern creations which reflect our modern world. Binge Books feature a great lineup of classic creators and rising stars with self-contained and affordable stories, which makes them perfect for our “Binge Age” along with family-friendly content that emphasizes fun! As great as all that sounds, you can’t really appreciate how great Binge Books are unless you try them!

For more on Binge Books, visit www.BingeBooks.fun. For the comics themselves, visit your local comic book shop.

I have been looking forward to these comics ever since Darin started soliciting advice about them here five or six years ago. I complain often enough about modern comics (or I used to; I try not to do that so much anymore) that I'd be a hypocrite if a didn't try these series that promise to be more along the lines of what I'm looking for. I bought and read The Heroes Union the day it came out, and plan to read the first issues of Startup and Blue Baron as well. (When I first heard about Suckers I wasn't all that interested, but I've decided give that series a try as well.) I especially like the format: 68 pages for five bucks is a great deal in today's market!

Binge Books reminds me a bit a Bob Layton's (sadly short-lived) company Future Books. It also reminds of of the more recent Charlton Arrow, which also went away all too quickly. I suspect some of the criticism you will receive is that your line is "old fashioned" and "nothing we haven't seen before" (criticisms leveled as Future Comics and Charlton Arrow as well). Don't ignore those criticisms, but rather stress the similarity to titles such as Spider-Girl as you did above. Comics like this are unique in today's market.

My question is, what are your future plans beyond the initial release of four first issues? I imagine the story and art have been in the can for some time now. Have the creative talent committed to more issues?

I truly wish you the best in your endeavour.

First of all, thank you Captain, for spreading the word about Heroes Union and Binge Books.  I loved having the opportunity to talk to your audience.

As for Jeff's question, the 2022 releases kick off with Startup 1 and will continue 1 per month, mostly with new printings of stories that were self-distributed from 2015-2019.  I will mix in some new releases but most of those will surface in 2023.  Tom DeFalco has completed his plot for Headhunter 2 which Steven Gordon has begun drawing.  Roger Stern has completed his plot for Blue Baron 4 which Ron will draw. Before that though, Ron is doing layouts for David Michelinie's completed plot for Heroes Union 2.  Another artist has begun turning those layouts into full pencils and hopefully that process will go fairly quickly.  Al Milgrom, Neil Vokes and Mike Vosburg have finished stories for a comedy/horror anthology that will come out before Halloween next year.  I'm signing up a few new/old artists right now and regular updates or announcements usually appear first on facebook at www.facebook.com/Sitcomics