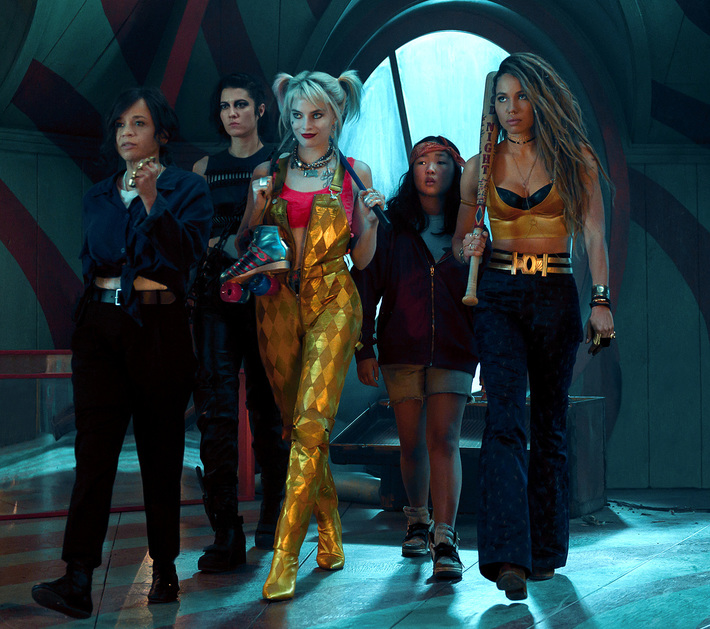 Feb. 13, 2020 — Birds of Prey has arrived, with some interesting takes on our favorite funnybook characters — some spot on, some wildly different. Let us, as they say on every English essay test, compare and contrast:

This all-female superhero team began in 1996 as a team-up, starring Barbara Gordon (as wheelchair-bound cyberwarrior Oracle), with Black Canary as her field agent (often buttressed by lots of guest stars). When fan-favorite writer Gail Simone took over in 2003 she permanently added Huntress, and that trio is considered the classic lineup. The movie doesn’t come close until the end, which establishes Black Canary, Huntress and ex-cop Renee Montoya as a team calling itself BoP.

After DC’s linewide revamp in 2011, called “The New 52,” a new Birds team launched, consisting of Batgirl (Barbara Gordon, out of the wheelchair), Black Canary, Katana, Poison Ivy and new heroine Starling. With her recent success in movies and television, Harley Quinn has begun showing up with alarming frequency.

Other Significant Versions: A 2002 TV show named Birds of Prey ran for one season on The WB, starring Ashley Scott as the Huntress,  Dina Meyer as Oracle and Rachel Skarsten as a teenage Black Canary. 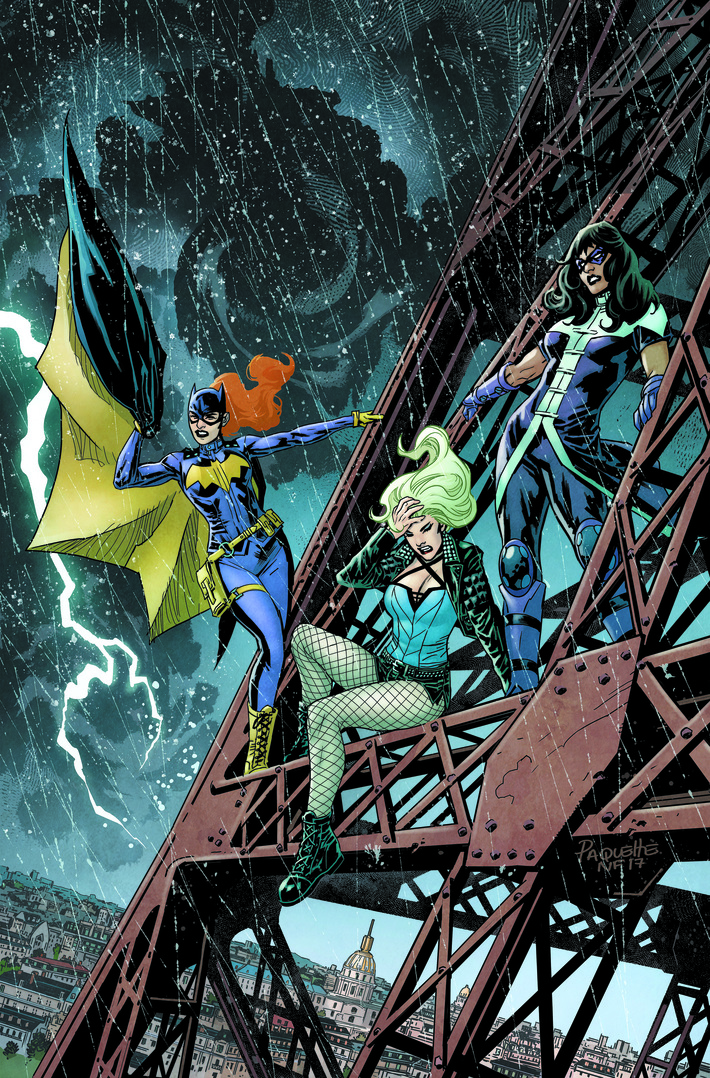 This 2018 cover from Batgirl and the Birds of Prey #18 shows the three most famous Birds in their most familiar forms (from left): Batgirl, Black Canary and Huntress. (Cover  art by Yanick Paquette, © DC Comics)

Harleen Quinzel first appeared as The Joker’s henchman/besotted girlfriend on Batman: The Animated Series and was quickly adopted by the comics. I always had a problem with the character, as I was old enough to have seen enough toxic relationships that I viewed Harley’s antics as sad and desperate instead of funny. I didn’t laugh when she called the man who beat her “puddin’;” I felt sorry for her.

But that drawback has been solved. All versions of today’s Harley — comics, TV and movies — have evolved into the same one. Everywhere you see her these days, she’s a sadder but wiser, Jokerless, somewhat lunatic anti-hero.

It should be noted that the comics version is often paired with Poison Ivy, as criminals and sometime lovers. Ivy and often Catwoman are fixtures in Harley stories, aspects that didn’t survive to the movies.

Other Significant Versions: Of special note are the current Harley Quinn animated show on DC Universe (where she’s voiced by Kaley Cuoco), the Harley-esque character Ecco on Gotham (played by Francesca Root-Dodson) and Dr. Harleen Quinzel on the aforementioned Birds of Prey TV show (Mia Sara).

Dinah “Black Canary” Drake premiered in 1947, in an era when a lot of white characters had “black” in their name (Black Condor, Black Terror, Blackhawk, etc.). When black superheroes began appearing in the ‘60s, very often they had “black” in their name (Black Panther, Black Vulcan, Black Lightning, etc.). In Birds of Prey the two trends got married and gave us a black Black Canary. For some reason this makes me smile.

Anyway, the 1940s comics-Canary was introduced as a skilled fighter who pretended to be a criminal in order to infiltrate criminal gangs, which echoes the movie-Canary, who works for a gangster but rats him out. In 1969, comics-Canary developed her sonic power,  which all later versions tend to include. And in the 1980s comics-Canary was retroactively revamped as the daughter of the original, a development hinted at in the movie version.

However, The New 52 re-wrote the character as rock singer who dabbles in crimefighting, while including her longstanding romantic connection to Green Arrow. The movie version doesn’t use any of that.

Other Significant Versions:  Live versions include the one on TV’s Birds of Prey, another on Smallville (played by Alaina Huffman) and no less than four on Arrow, played by Caity Lotz (who changed her name to White Canary and moved to Legends of Tomorrow), Katie Cassidy (whose Black Canary died in Season 4), Katie Cassidy again (as a parallel-universe version called Siren) and Juliana Harkavy (who held the title when the show ended, and may continue the character if the Green Arrow and the Canaries backdoor pilot goes to series).

In the movie and much of her comics career, Huntress is Helena Bertinelli, a Mafia princess whose family is slaughtered before her eyes, then raised by gangsters in Italy to be an assassin, and adopts her costumed identity to get revenge … before softening into a non-lethal superhero.  I found it an interesting story choice to depict movie-Huntress as unsocialized and clumsy in non-lethal interactions. It was played for laughs, and it was funny, but IMO it’s a criminal underuse of accomplished actress Mary Elizabeth Winstead (Fargo, 10 Cloverfield Lane, Scott Pilgrim vs. The World).

After The New 52, comics-Helena Bertinelli is a spy in an organization named Spyral who uses Helena Wayne (as in Bruce Wayne) for an alias. None of that made it into the movie, for which we should all be grateful.

It also should be noted that the Spyral business is Helena’s third origin, and the Mafia-princess bit is her second. In her first, she was the daughter of the Batman and Catwoman of Earth-2, before that world was wiped out in the 1985-86 Crisis on Infinite Earths. Thank God I no longer have to explain that reference.

Other Significant Versions: The aforementioned TV show, with Ashley Scott as Huntress. Interestingly, she was once again the daughter of Batman and Catwoman. The Bertinelli version, with emphasis on her rage and deadliness, appeared on Arrow (Jessica De Gouw) Another character lifted from Batman: The Animated Series, Renee has been a lesbian cop (and then an ex-cop) in most of her comics appearances. Ditto the movie. For a little while in the comics she became the second character to be called The Question, but that was dropped in The New 52, which returned her to the Gotham PD.

Other Significant Versions: Victoria Cartagena played Montoya on Gotham, and Monique Curnan played a Montoya-like character named Anna Ramirez in The Dark Knight. Also, one could be forgiven for confusing Maggie Sawyer on Supergirl (Floriana Lima) for Montoya, as the character was clearly based on comics-Montoya (who is Latinx) and not comics-Sawyer (who is blonde and white).

This is the biggest divide between Birds of Prey and the comics. Cassandra Cain in the comics is the daughter of professional assassins David Cain and Lady Shiva, who allowed her no verbal interaction as she grew up and trained her relentlessly to follow in their profession. She has limited verbal skills, as her “native language” is body language — she can read attacks by an opponent by watching how they move. Adopted (more or less) by Batman, she took the Batgirl identity during a period when it wasn’t in use, then became "Black Bat," and then "Orphan."

In the movies, Cassandra Cain is a young pickpocket who lives with foster parents. The only thing she has in common with her comics counterpart is that both are Asian.

Other Significant Versions: None, really.

The movie and comics versions of Roman Sionis are superficially the same: Both are from wealthy families, both form criminal organizations and both have a fascination with masks. The comics version includes that he was dropped on his head as a baby AND bitten by a rabid raccoon. Make of that what you will. Also, while introduced as a Batman foe, he has also become a major antagonist for other characters like Red Hood and Spoiler, and has a violent hatred of Catwoman. (She shot him in the head once.)

Also, in the comics the character is dead serious, whereas Ewan McGregor’s movie version is flamboyant and erratic. Personally, I like the movie version better.

Other Significant Versions: Roman’s father appeared on Gotham, played by Todd Stashwick, so you knew little Roman was on the way. The only other important Black Mask appearances are in animation, as a major antagonist in The Batman (voiced by James Remar, 2004-2008) and Batman: Under the Red Hood (Wade Williams, 2010).

In the comics, Zsasz is a lethal maniac who cuts a scar into his skin for everyone he kills — and he is covered in scars. Aside from the fact that comics-Zsasz is a solo act and movie-Zsasz works for Sionis, they are essentially the same.

Other Significant Versions: Who can forget Anthony Carrigan’s unhinged take on the character in Gotham? Zsasz’s affable, yet murderous, disposition was often the best part of a given episode. Carrigan’s performance proves you can still be upbeat and personable while killing people. There’s no need to be unpleasant about it!

Me, too. The track record with superhero movies is such that if it's Marvel, I'm excited and will be there opening weekend; with DC, I kind of bother with everything else I have to do and maybe I'll get around to it and maybe I won't until it comes on TV.

I've seen a fair amount of squawking that Black Canary isn't the Black Canary from the comics because she isn't in black leather and fishnets (and she's Black, too), to which I say comics are comics and movies are movies and you have to let each medium play to its strengths. Plus, why is nobody complaining about Batman being in armor? It's heavy and impractical and he didn't wear it in the comics until the movie Batman started wearing it.

But I maybe should get around to seeing Birds of Prey (and the Fantabulous Emancipation of One Harley Quinn)* if only because it has the Gail Simone seal of approval, and I enjoyed the comics title very much under her run.

* What idiot in the marketing department came up with that jawbreaker of a title? Are they daring people to stay away? Within a couple of weeks, the movie was rebranded Harley Quinn: Birds of Prey, which is what they should have gone with in the first place.

I really got on Ms Winstead's bandwagon when she was the star of the single-season 2016 series BrainDead. As IMDB says, "A government employee discovers that the cause of the tensions between the two political parties is a race of extraterrestrial insects eating the brains of the politicians." It's a really good satire of our current political mess, has Tony Shaloub as an extreme right-winger and is free to watch for anyone with Amazon Prime.