I'm new here so please be gentle with me. :) I've been a comic book reader for most of my 44 years and a TV sitcom writer for almost half my life.  Later this year, I'm launching a publishing company that mixes my experience in comedy with my love of comics.  It's called Sitcomics and the build-up to launch continues to be both exhilarating and terrifying!

Though I don't hate modern comics, I'm definitely in the camp that fondly remembers the way comics were made before the direct market took over the business.  I want my books to reflect that Silver/Bronze Age sense of fun while remaining firmly in the 21st Century.  Among my eight initial titles are four super-hero comics that take place within a shared universe.

Artists on board include industry vets like Ron Frenz, Sal Buscema (who drew the above pin-up), Tom Richmond (MAD Magazine), Jeff Shultz (Archie), Joe Rubinstein, Craig Rousseau and many other.

From reading other discussions here, it's clear that most of you are extremely knowledgeable about the comics industry and I'd love to get any feedback on certain things I'm planning to do to help my comics stand out in a very crowded marketplace.   Please understand I'm not selling anything - my books won't even be on sale for another six months.  This is just a request for honest opinions, specifically about the super-hero line of titles and the way I'm producing them.

I personally feel decompressed storytelling is a big reason why the many fans of Marvel's movies haven't migrated en masse to the comics that inspired them.  I mean, imagine being asked to pay four dollars to see the first twenty minutes of the Avengers movie and then being told you must do the same thing every month for six months in order to see the whole movie.   Nobody in their right mind would go for this and yet comic publishers have no problem asking their readers to do exactly that month after month.  As a result, anyone with a casual interest in Marvel's characters who throws down four bucks for a random issue, soon realizes this is not a satisfying experience and wisely spends their next four dollars on some other form of entertainment.

In light of this, all the books I'm publishing will be 64 page quarterlies, costing $5.99 each.

Each will contain a single, self-contained story broken into three, 17-20 page chapters.  Yes, there will be cliffhangers at the end of each chapter but you won't have to wait 30 days to find out what happens next.  The idea is that Sitcomics will look and feel like a comic book, but read like a trade.

Alright that's just one of many things I'm planning to do differently from the industry's conventional wisdom.  So what do you think?  Is the page count too high?  Does that price seem too high?  If anyone has strong opinions positive or negative, I'd love to hear them.

Thanks and have a great day!

Oh, yeah, I've never been a completist like that. Although even without needing to own all variations, if I get, say, the variant cover of the new Batman (Flash was on it, so I did), that means I won't necessarily recognize the same issue with the standard cover when I see it next. I'd rather not buy it twice, if I can help it.

One way this influences my buying decisions is that it prompts me to buy a book the week it comes out -- because once that week's over, I have far less confidence that I do or don't have certain issues of books that I only buy sporadically.

@Richard, Thanks for your comments and I'm glad to hear my plan for the 64 page format, retailer returnability and story-specific covers makes sense to you.  I can also tell you that there will be no variant covers (at least during the first print) and definitely no reboots or renumberings.

@Luis, I really appreciate the kind words.  The inker is the legendary Sal Buscema over Ron Frenz's pencils with Glenn Whitmore doing the colors.  It's an incredible art team and I feel incredibly lucky to have them on board.  I can reveal here that Sal is penciling the cover to the 64 page Blue Baron #1.  I saw it just this week and it blew me away.  Fans of Sal's art will definitely want to keep an eye out for it.

@Rob, Thanks for the feedback on the Blue Baron page.  The best part of making these books is getting e-mails from artists with brand new pages attached.

As for the digital plan, it feels right that digital readers will get to read chapters 1 and 2 before the print version is released.  While the print readers get to read the third chapter a week or two before the digital readers.  I'm sure it'll draw complaints but I think it's really important that comic stores get something first too.  And thanks for the advice about the editors' notes.  I'll work to keep mine as spoiler-free and unobtrusive as possible.

I really appreciate this dialogue, everybody.  I'm definitely doing everything I can to make this product as entertaining as possible, but the challenge is to make the books stand out in such a crowded market. Your comments are helping to remove a little bit of the guesswork.

One thing I'm also curious to ask is if you even read comics from Independent publishers.  And if so, how do you find out about them?  Internet news sites?  Comic conventions?  Creative team you already like?  Word of mouth and recommendations?  Or do you just pick flip thru new books at the comic store and if they look interesting give them a shot?

Darin, these days I read a lot of internet comics sites, and very rarely even find any paper (American) comics for sale. For years now I read a lot more _about_ comics than I do read comics themselves.  I almost feel like I have a better feeling of the stories if I don't read them directly.

Digital is very much a main, if not the decisive distribution format far as I can tell.  I assume that even for DC and Marvel, who have a better economy of scale for the paper format, digital makes a lot more money than paper.

I have bought some books on Comixology now and then, but for independent comics you may want to check the RPGNow people.  They work through several different online brands (DriveThruComics being one of those) and offer a very useful, well-planned infrastructure and marketing plan.

Directed Internet ads may be something to consider as well.  Places such as Wikia tend to attract some very specialized niches of fans, with a far higher-than-average chance of actually buying comic books, particularly if a thematic connection is pointed out.

One thing I'm also curious to ask is if you even read comics from Independent publishers.  And if so, how do you find out about them?  Internet news sites?  Comic conventions?  Creative team you already like?  Word of mouth and recommendations?  Or do you just pick flip thru new books at the comic store and if they look interesting give them a shot?

Darin, these days I read a lot of internet comics sites, and very rarely even find any paper (American) comics for sale.

This ties in with my statement that comics have to be where people actually go. People actually go on the Internet. It's probably almost as hard to find American comics in the USA as it is in Brazil. There are whole states that don't have comic shops or don't have any within reasonable traveling distance. And members of the general public do not go to comic shops.

To be fair, I guess I used a bit of license previously.  It is easy enough to find or order some trade paperbacks or essencials in a few bookstores.  Particularly those on the expensive side.

But that does not look like a good choice for main venue of distribution to me.  I figure even Marvel, DC and Dark Horse have a hard time making money that way (at least here in Brazil) - and perhaps even more important, those are very specialized, very limited sells when measured by number of issues.  I think most comicbooks don't even come in more than a single copy to each bookstore.

Even if that is financially attractive (and I would not bet on it), that is still not a good way to acquire broader readership and establish a new brand.  I'm actually worried it may be hurting the prospects for continued survival of even the big two.

@Luis, I'm going to sell the books digitally on my own website via SendOwl.  I'll put it on Comixology and Amazon a few months later.  And they'll definitely be DRM-free.

One follow-up question for you.  You wrote:  "Places such as Wikia tend to attract some very specialized niches of fans, with a far higher-than-average chance of actually buying comic books, particularly if a thematic connection is pointed out."

At your suggestion, I set up a wikia page but what did you mean by a "thematic connection"?

@Richard, Back in the late 70s, I'd park myself by the spinner rack for an hour while my mom shopped all over the drug store.  Even if drug stores did still sell comics, I don't think most parents would let their kids sit unattended anymore.  I'm targeting coffee shops because they have counters for impulse buy items and they get a lot of traffic from all demographics, including parents with kids.   Sound good to you?

And here's art from Startup #1, another comic set in the same super-hero universe as Blue Baron.  Craig Rousseau drew this page with Glenn Whitmore again doing the color art.  The other page is another pin-up by Sal Buscema.   Sitcomics 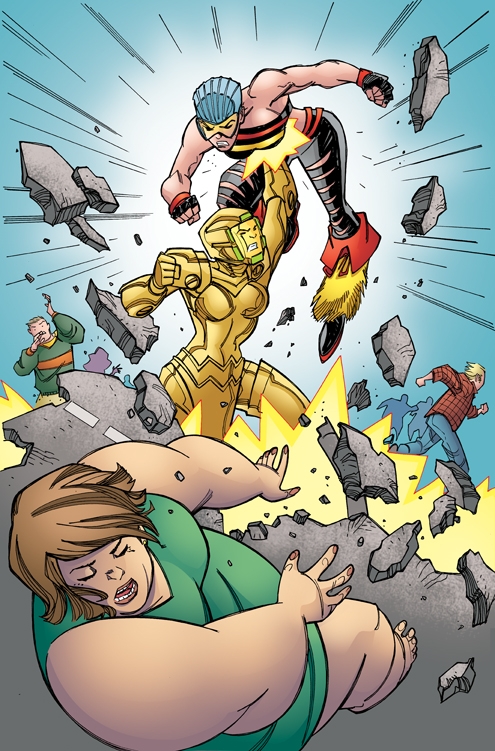 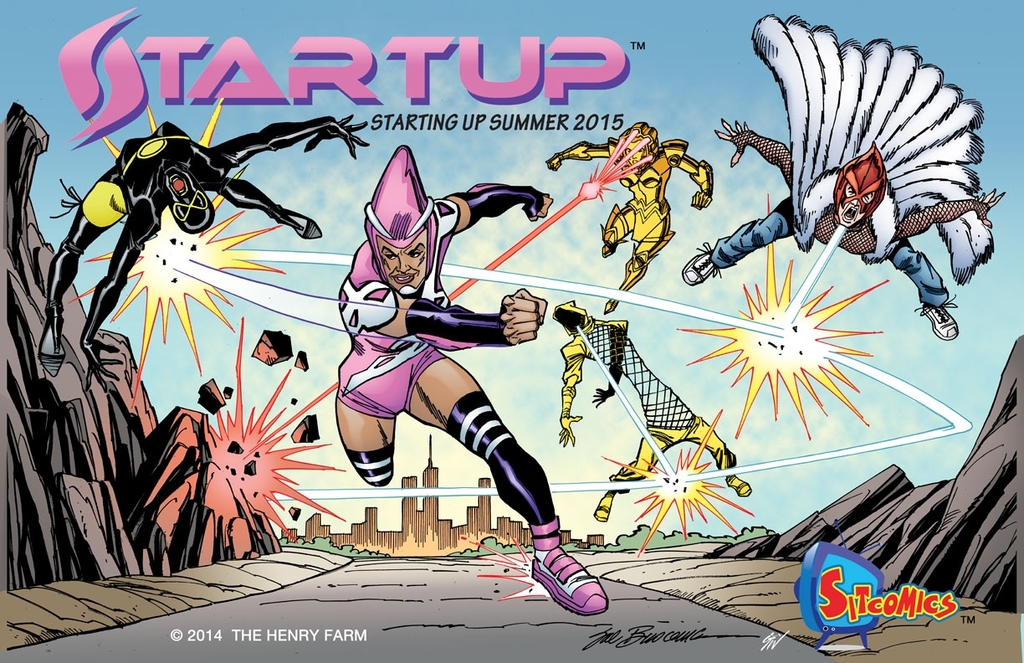 A thematic connection... on second thought,a niche affinity might be a better way of putting it.  There is a certain mindset that to some degree gravitates towards both venues.

Darrin, Mostly I find out about new comics through news sites & personal recommendations (usually also online) -- and sometimes wind up picking up new stuff I like when it's bundled together with other stuff I already wanted. I've bought a number of indy bundles via comixology -- just read a cool book called The Chairs' Hiatus that I never would have picked up on is own. It's the same effect I get with Dark Horse Presents -- every so often I discover a new artist or title thanks to its inclusion in the anthology.

Darin, I hope you don't mind.  Since you have created the Wikia space, I took the liberty of putting a little content on it.

@Rob, I'll definitely be doing digital sales via Comixology and Amazon.  As much I'd like to think people will just flock to my own site to buy my books, if they're not sold at the usual places, most people won't even know they exist.

@Luis, Of course I don't mind.  I'm thrilled!  Your entry was really well-written too!  I'll try to add more updates as the release date approaches but don't expect much in the way of graphics.  I've been writing TV shows for 20 years and my computer skills remain firmly fixed in 1995 (and I was pretty incompetent even then).  I really appreciate your doing that!

I noticed that Blue Baron #1 and Super 'Suckers #1 are up on Comixology Submit this week.