A partial explanation may be because the Defenders had Charles Xavier as a guest member for that story.

A better explanation would be because that Defenders roster included, besides Xavier, Doctor Strange, Hulk, Valkyrie and Nighthawk.   Magneto knows better than to go out of his way to pick up a fight with Hulk or Doctor Strange immediately after being restored to adult form; going after Nighthawk would harm his street cred; and I guess he would have to go to Stephen's Sanctum Sanctorum in order to find Valkyrie.  Not the mark of the smart supervillain.

An even better explanation is that deep down he knows he can't very well blame anyone else for his failure to control the behavior of his own creation, Alpha.

---------------------------
On another note, Uncanny #111 did have the hint that Jean was made by Mesmero to act sluttier than her ordinary self, just as Banshee was more outspoken and Scott was more aggressive.  Her interactions with both Beast and Wolverine suggest a level of awareness of her attractiveness and willingness to take advantage of it that we would not expect of Jean otherwise.  It is really spotlighted with Beast, and she even mentions being about to go on a "heavy date with the boss".  So I think that Claremont hinted this scene well enough in the original story.

That was in X-Men #104, Captain, as Magneto was a baby when the new team was formed. And he destroyed these New X-Men which wasn't hard when two of them, Colossus and Wolverine, were particularly vulnerable to his powers. The one who did the best against him was Banshee, of all people, but they were defeated until Cyclops made the save. Magneto was at his most destructive as opposed to his previous appearances.

Speaking of which, if he wanted revenge because of his baby-dom, why didn't he go after the Defenders?

Adamantium is an alloy of vibranium and steel and thus is affected by magnetism.

This thread is going to make me buy the Classic X-Men omnibus, isn't it? You fiends!

Yes, During the Calremont/Cockrum/Byrne run Magneto used Wolverine's skeleton to thrown him around like a rag doll.

And which of these covers do you like better? (This question open to anyone.)

Oh...I'll take the original every time.  This is such a fantastic run.  And as Cap says, these encounters with Magneto really underscore just how dangerous he is and how much of a threat he is perceived to be by the X-Men.  I don't know if there were many other comics around at this time that presented a villain as being quite so dangerous and posing such a threat.  That was part of the genius of Claremont/Byrne.

It may be worthwhile to point out that between #104 and #111 Magneto had met Beast already, in a two-part crossover between Supervillain Team-Up and Champions.  It was a wonderfully ambitious tale.  To use a quote spotlighted in recent comics, it was very much a case of a reach that extended its own grasp.

The short of it is that Doctor Doom had met Magneto while deploying a mind control gas that had remarkable results.  Out of a craving for a challenge, he decides to allow Magneto to rebel and to take an Avengers as his ally.  That Avenger turns out to be Beast, and they end up having to fight the mind-controlled Champions.

Around the same time, Magneto also created his most offbeat version of the Brotherhood of Evil Mutants and fought, of all people, Captain America alongside that group.

Magneto was well presented as a remarkable threat in the X-Men books of this time, but he sure had a lot of rivals. Doctor Doom, Namor, the Avengers' Michael, you name it.  We also had Nebulon in the Defenders, and he is no small threat.

As for Magneto and Adamantium, sure, he was consistently shown to be capable of affecting it or at least Wolverine's claws.  That happened in #104, again in #111, and famously much later in the 1990s.  On the other hand, it was once established (in New Mutants) that Captain America's shield is not subject to his magnetic control.

When vibranium and adamantium were first introduced I don't think there was any overlap. Was adamantium revealed to be an alloy of vibranium and steel during Chris Claremont's run on X-Men or somewhere else?

I don't think that Claremont ever addressed that subject matter.  I am not sure that he ever wrote about Vibranium, even.

The link between vibranium (the Wakanda, sound-absorving version) and Adamantium was established by Mark Gruenwald in the story where Captain America's shield is stolen.  1985, circa #302-#304, IIRC.  #304 has Myron McLain explaining the origin of Adamantium.

Adamantium itself goes back to Roy Thomas' run in Avengers in the very early 1970s.  Since Ultron's second appearance, IIRC.

When vibranium was introduced, it was shown specifically to not be dented by Thor's hammer. It was in a story drawn by Barry Smith (before he was Windsor-Smith), one of two, in 1970. (Cover by John Buscema.) 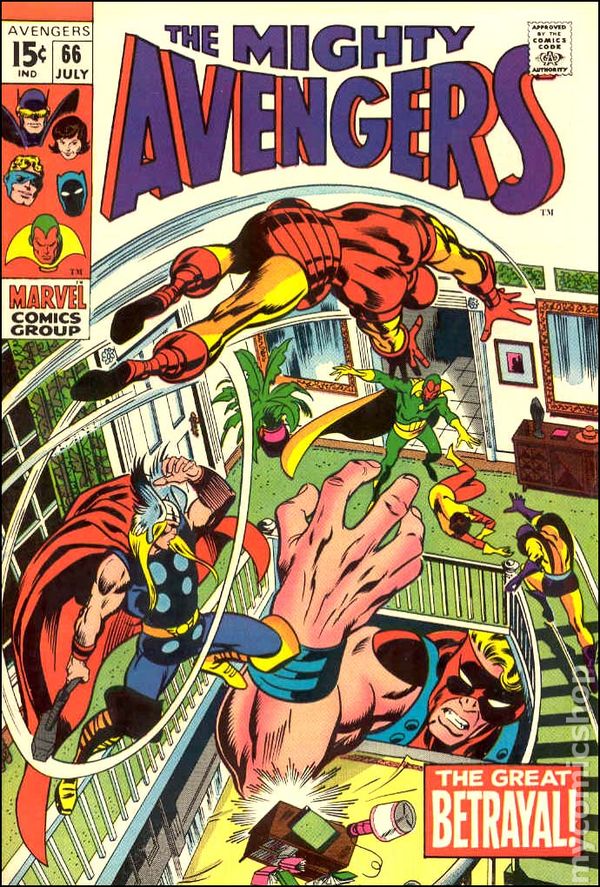 I had no idea at the time that adamantium would become important -- Wolverine was still four years away -- but I was thrilled to have Thor and Iron Man back, at least for an issue or two. In those days I was pining for their return, as they had been out of the book since 1965 (aside from some cameos). And for the longest time, the Avengers really needed the power boost.

After the famous Avengers #15, the team simply wasn't Earth's Mightiest Heroes any more. Heck, the original X-Men could probably take 'em. First there was Cap's kooky quartet, which was no world-beater. Then Hank & Jan returned, but Pietro and Wanda left, creating a foursome where the only powers were a girl who could shrink and a guy who could grow to 10 feet.Then Cap left, too, and Hank lost his powers! That left Hawkeye, Wasp and a de-powered Goliath for several issues, until Hank got his powers back in issue #51, and then Black Panther joined in #52. They still weren't much of a threat until the Vision joined in #57. Finally,after three long years, they had a big gun!

So from Avengers #15 through #57, the Li'l Capn was consternated by the relative weakness of the Avengers.

I should mention that Hercules semi-joined for a little while, from issues #38-45, but then he virtually disappeared from the book and left altogether in #50. For a brief moment the team had a big gun, but he sort of made Goliath redundant, so it wasn't much of an addition.

Anyway, every time Thor and Iron Man showed up, however briefly, I was filled with hope of a return to the glory years of Avengers #1-14, when they truly were Earth's Mightiest Heroes.

Little did I know that writer Roy Thomas also wanted to bring in the two big guns, but was thwarted because Stan Lee didn't want them in there, and besides, he thought the perfect number for a team was four. (Maybe that's why he let the Assemblers get so weak -- to show that they needed an armored or Asgardian Avenger to bolster the ranks. That's pure speculation on my part, but it was pretty serious there for a while!)

Interestingly, Roy himself has said in interviews that that's why he brought in Hercules -- if he couldn't have Thor, he'd have the next best thing. But Herc was no Thor, bringing nothing but super-strength to the table, on a team that already had Goliath.

Anyway, Luis, thanks for bringing up these old memories. I sure loved the Avengers in those days. Come to think of it, I still do!

Magneto easily takes out Wolverine and Colossus in four panels! 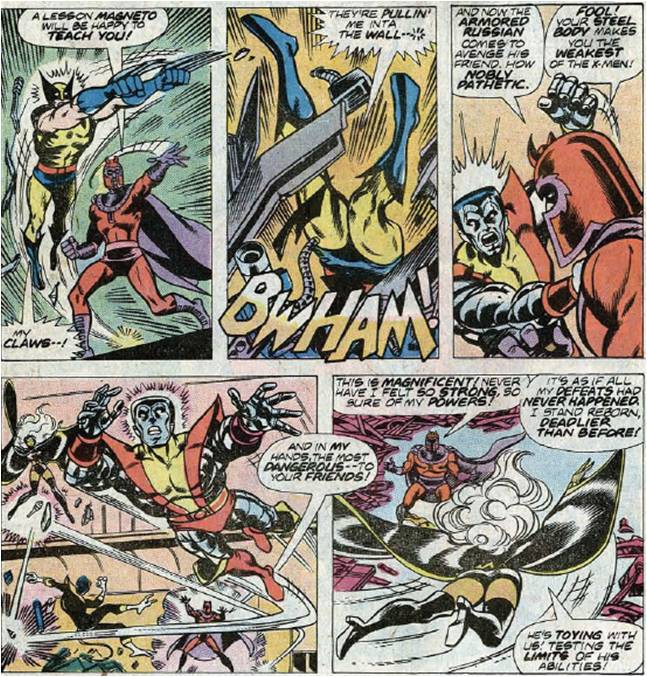 Yep, in those early encounters, Magneto handled Wolverine (and Colossus) rather handily. The only X-Men who were truly effective against him were Cyclops, Storm (if she didn't use lightning) and Jean Grey (if he didn't have his helmet on). Maybe because of that, to me, to this day, they still constitute the power triumvirate in the X-Men. (Sorry, Wolverine fans. He's just a short guy with knives on his hands.)

Anyway, Magneto's manhandling of "the best at what he does" reaches its apotheosis in "Fatal Attractions" (1993), where Magneto actually rips the adamantium out of Wolverine's bones. 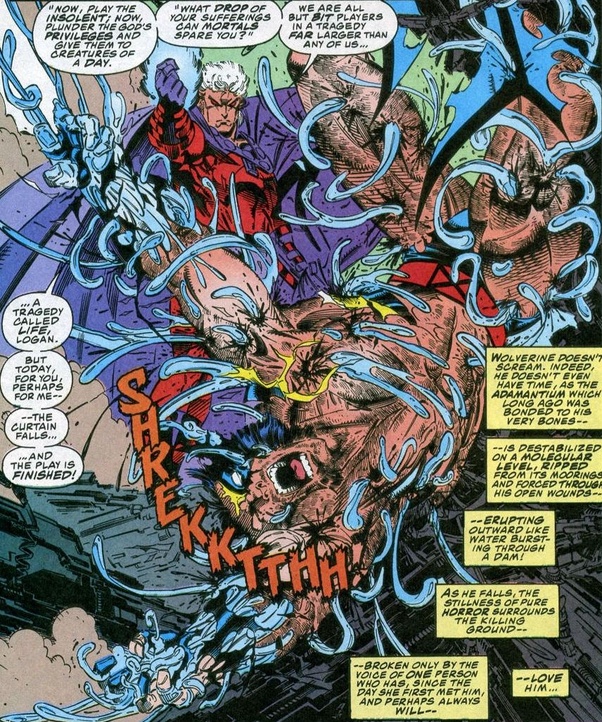 Yeah, it was pretty awful.