Crisis of Characters at Infinite Publishers!

How many characters at work-for-hire publishers have been taken to other publishers, usually by their creators, re-named and used again?

The other day I was reading about Marvel's Helstrom TV series (or what little we know about it), and the reporter mentioned other characters from Marvel's horror corner that could appear. One of them was Devil-Slayer. That reminded me that the character, created by David Anthony Kraft and Rich Buckler, began print life in the eponymous Demon Hunter at the Atlas/Seaboard line. When Atlas folded, Kraft simply introduced him in Marvel Spotlight #33.

And that led me to think: How many other times has this happened? Off the top of my head I suddenly remembered three or four more, including one character that appeared at three publishers with three different names, and two more that were both created by Howard Chaykin.

I thought it would be fun to throw it open and see how many we can list. Characters that kept their name and appearance moving from one publisher to another, like Phantom Lady and Blue Beetle, are too numerous to list and not really in our definition anyway. But characters that are poorly disguised versions of other publishers' characters -- like Justice League/Squadron Supreme -- sure, why not?

If nobody else gets the ones I'm thinking of, I'll add 'em later. Meanwhile, let's start with my above example: 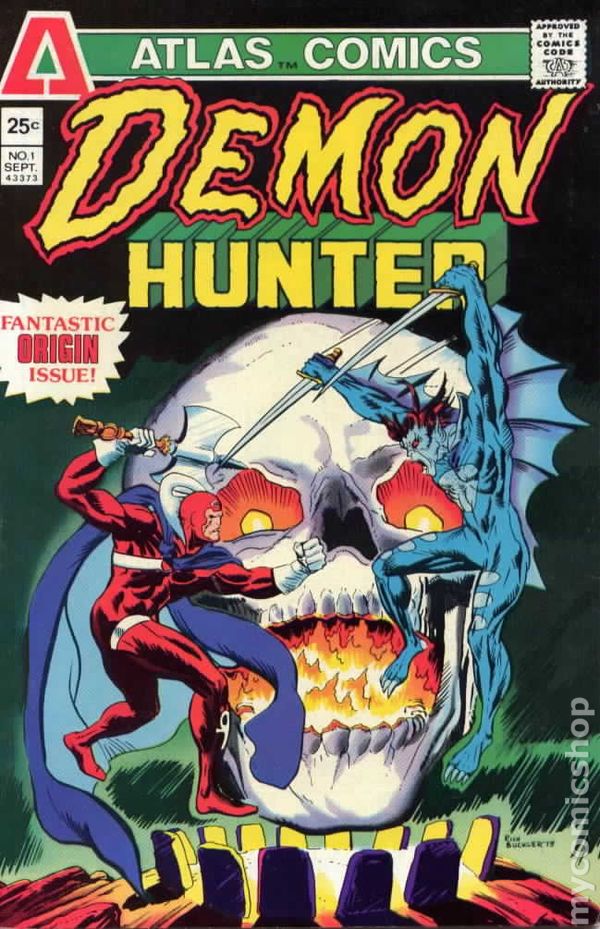 He was re-used two years later by Kraft and Buckler in Marvel Spotlight #33 (Apr 77) with some minor differences and a name change. According to Wikipedia, Devil-Slayer was supposed to take the lead position in Marvel Spotlight, but the book was canceled after this issue. Instead, he was shoe-horned into Defenders. A second Devil-Slayer, grand-daughter of the first, starred in Dead of Night in 2008. 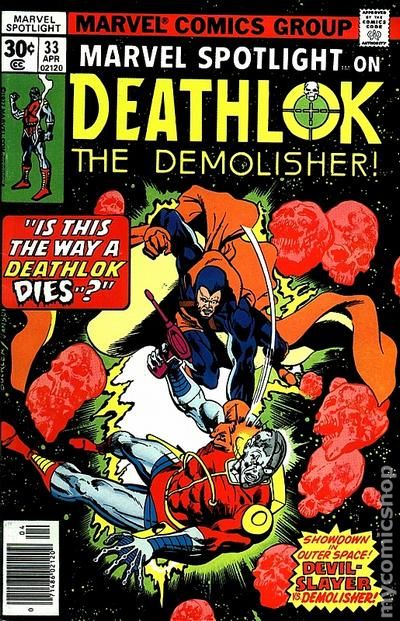 Another character that qualifies is DOCTOR NEMESIS who first appeared in Ace Magazines' Lightning Comics #6 (Ap'41) then became public domain so that Roy Thomas could use him in Invaders #1 (My'93) renamed Doctor Death and lead the Battle-Axis, a group of other public domain heroes like Human Meteor, Spider Queen, Strongman and Volton. The last one, along with the Doctor got absorbed into the Original Human Torch's story!

But then in Uncanny X-Men #504 (Ja'09), he reappears as Doctor Nemesis again and joins the Merry Mutants!

Alan Moore also used some non-Charlton characters as templates.
I've read interviews where he said he based Silk Spectre II more on Phantom Lady than Charlton's Nightshade, because the former was better known and more interesting to use. Black Canary has also been mentioned as a partial inspiration for Nightshade, which might be why Moore wrote a mother and daughter superhero legacy, which pertains to Black Canary after Crisis on Infinite Earths.

Absolute Watchmen, first published in 2005, contains several pages of an extensive article by Alan Moore from 1988* describing the development of the story. He had considered using other heroes before settling on the Charlton heroes. By the time he was told that he couldn’t use the Charlton heroes he had already plotted the eventual story. The powers and general attributes of the Charlton heroes were still used in order to retain the story he had already plotted. In the 1988 article he was still thinking of Silk Spectre as a reimagined Nightshade with a better costume and more-liberated personality.

*I’m not sure if Alan Moore had begun his contentious relationship with DC in 2005. The 1988 article, which is extensive and illustrated, gives me the impression that he was still on good terms with DC at the time. It also seems to me that this material was published somewhere in 1988, but no reference is made to this.

I have the original Watchmen hardcover from 1988 with its notes by Alan Moore. It becomes apparent that he moved away from several of his initial characterizations, particularly Peter Cannon/Ozymandius, Peacemaker/Comedian and Nightshade/Silk Spectre. Even in his original outline, Nightshade was simply the woman of the story as he had little knowledge or inspiration of her. Afterwards, he did base the elder Silk Spectre on Phantom Lady but the younger one was his own creation. No mention was made about Black Canary.

Captain Metropolis might have been based on the TV Batman, a masked lawman who works with the authorities. Dollar Bill was the patriotic hero like Captain America or Minute Man. Brother Night/Hooded Justice was the underworld scourge like the Destroyer or Hangman.