I tried finding an existing thread with a title similar to this one, but to no avail.

Here I ask, what are some feasible cross-overs that you would enjoy seeing? And yes, I will say that the DC/Marvel refusal is a thing of the past if you have one of those.

Masters of the Universe/GI Joe

(You know, it just occurred to me... Wimpy is always saying, "I'm one of the Jones boys." I wonder if the two are somehow distantly related...?)

Can we get Bernie Wrightson?

It's a natural: Man-Thing and Swamp Thing.

Might as well toss in the Ultra-Humanite as well.

And the Gorilla Boss of Gotham City! 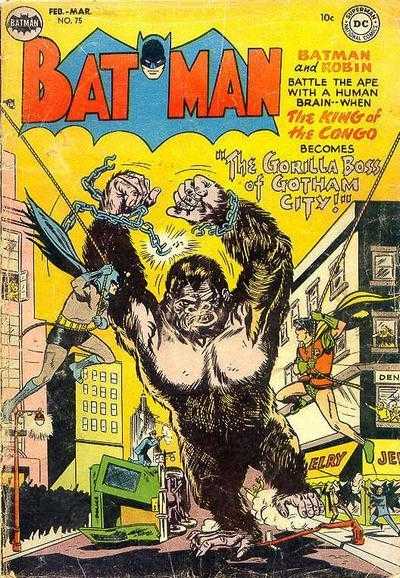 Detective Chimp's latest case takes him to Cleveland where, in the ultimate mismatched buddy investigator partnership, he must team up with a Duck named Howard

(Think I used that one in another thread at some point. Really do want to see that one)

Black Canary, Black Widow, and the original Black Cat... sent on a suicide mission by the White Queen!

All in top 1950s EC Style: The Crypt Keeper relates a Scooby-Doo story, while the Old Witch presents Sesame Street

Deadshot vs Deadpool vs Deathlok vs Deathstroke......to the death!

Steve W replied to Steve W's discussion A Cover a Day
"A warm welcome to new poster Irma Kruhl . Great to see you here - as Alice Cooper…"
35 minutes ago

Travis Herrick (Modular Mod) replied to Wandering Sensei: Moderator Man's discussion What Comic Books Have You Read Today?
"X-Cellent #2-5 - This is the follow-up series to the Milligan/Allred series X-Statix. There is…"
55 minutes ago

Lee Houston, Junior replied to Steve W's discussion A Cover a Day
"I know the tradition dates all the way back to "Punch and Judy", if not earlier, but are…"
1 hour ago

Travis Herrick (Modular Mod) replied to The Baron's discussion Movies I Have Seen Lately
"Oops, and since I didn't say, Prey is the new entry in the Predator franchise, which I'm…"
1 hour ago

Jeff of Earth-J replied to Jeff of Earth-J's discussion The Eighth Doctor: Stranded
"GET ANDY: "The Doctor resolves to make a difference and save one life in particular. But…"
1 hour ago

Jeff of Earth-J replied to Cavaliere (moderator emeritus)'s discussion What are you watching right now?
"OUR GANG: After watching the first three sets (comprising the years 1929-1933) in reverse order, we…"
2 hours ago

Captain Comics replied to Captain Comics's discussion This Week in Comics: Aug. 15-21, 2022
"I have so many books in my house that I bought because of a Jeff of Earth-J recommendation that I…"
4 hours ago