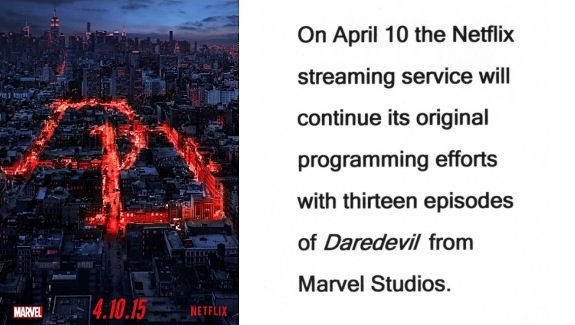 There will be thirteen one-hour episodes, each being a full hour, not forty-five minutes. Netflix has been releasing entire seasons of their original programming on the same day and presumably they will do the same with Daredevil.

Later Netflix productions will be Luke Cage, The Defenders, Iron Fist, and AKA Jessica Jones.

I've never been a Daredevil fan, but I'll have to check this out. The Marvel movies have been so good.

I agree. I'm a big fan of both of these guys. I don't know the others except Rosario Dawson and Deborah Ann Woll, who was a big hit as the adorable teenage vampire in True Blood.

I only know Dawson, D'Onofrio and Glenn, and like them all. Glenn's grizzled-ness is well-suited to Stick, the original smart@$$ sensei, and D'Onofrio's intensity could actually give depth to the otherwise boring Kingpin. Now, Claire Temple in the comics was little more than girlfriend/hostage, but Dawson is no wilting flower, and will certainly have my attention whenever she's on screen. (Heck, she'd have made an awesome Elektra.)

But best of all, as Claire Temple, she'll continue into the Luke Cage segments, and that leads me to suspect she'll be the R2-D2 of these vaguely interconnected series, which would disappoint me not at all.

Looks like the Lou Ferrigno Hulk Daredevil. Black costume and blindfolded so everyone will know he's blind.

I've heard this comment many times before, but it just occurred to me to wonder WHY someone who wears a blindfold would be thought to be blind. I think people probably would think the wearer had a way of seeing through it.

God help me, his enthusiasm actually has me contemplating the idea of waking up at 3:00 AM just so I can squeeze in a few episodes before work.

IMO, so far, it's the best superhero TV show I've seen. And by a wide margin. Also better than most superhero movies.  Hoping the remaining episodes are at the same level.

My wife and I were planning to watch just the first episode last night, and ended up binge watching until the wee hours. It is excellent.

One thing I like is that people don't conveniently fall down and go to sleep when they are hit. I've complained (mildly) about that before, as getting hit in the head hard enough to knock you out risks brain damage every single time. And it's not an easy thing to do, which is why boxing matches -- where the people doing the hitting are the best in the world at it -- last more than one round (usually).

Yet on TV and in the movies, the heroes will tap a guard on the head and he lays down and takes a nap. It's a convention, but it's a ridiculous one. Far better to kill the guard, because hitting him may not be sufficient -- he may wake up and sound the alarm -- or it may kill him anyway. That's why commandos and rangers don't hit guards over the head -- they slit their throats.

Upshot is that hand-to-hand combat isn't pretty or convenient, and Daredevil (ahem) dares to show it the way it is. When DD hits someone, they don't conveniently fall down and lie still; they hit back. A single guard may take him several minutes to subdue, and the guard may still get back up. It's a tricky business he's in, complicated by the no-kill rule. In fact, it's edge-of-your-seat stuff, which is what it's supposed to be!

The next episode for us is "Stick," and we're looking forward to it!