But yeah, Roger seems definitely coded as gay to me. Not openly, of course, because it's 1966. But as Louis Edmonds plays him, it seems well within the realm of possibility -- which gives credence to you "Roger slept with Laura once" theory. And will make me consider his hatred for Burke in a different light.

I mean, he, Burke, and Laura seem like they were close friends once...and Burke, if I understand correctly, was dating Laura, or at least had strong, unhidden feelings for her. Which leaves Roger as a third wheel, spurned not by Laura...but by Burke, perhaps? That Glinty McStoneface is a charismatic SOB, and who's to say its only women who fall under his spell?

And I've no plans to watch the 90s series anytime soon. I did just get a couple Gold Key comics, though... I'm reading the second of the two today!

"Which leaves Roger as a third wheel, spurned not by Laura...but by Burke, perhaps?"

Of course! That never occurred to me before, but it fits. (I see it more as an unrequited thing, though.)

"I did just get a couple Gold Key comics, though..."

Those are odd ducks...

Oh, I definitely see Roger's feelings for Burke as unrequited. To Burke, they were pals, that's all... and it might have come to a head if they hadn't killed someone when they were all out drunk-driving together.

Yeah, in one, Barnabas's werewolf pal is given a "cure" that makes him want to kill Barnabas. In another, Barnabas and (a fairly buff!) Roger get pulled back to Iceland in Viking times, and dragged into a feud between two warring clans -- one of which is named Collinsson. There's an evil wizard who wants Barnabas's ring.

"Which leaves Roger as a third wheel, spurned not by Laura...but by Burke, perhaps?"

Of course! That never occurred to me before, but it fits. (I see it more as an unrequited thing, though.)

"I did just get a couple Gold Key comics, though..."

Those are odd ducks... 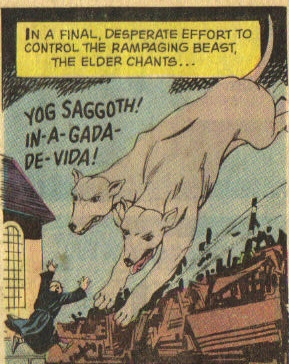 "Oh, I definitely see Roger's feelings for Burke as unrequited."

Yes, I see Roger's motives as being spurred by unrequited love, not spurned by Burke (which would imply Roger made his feelings known at some point and was rejected). Moving on...

"WHERE DO YOU GET YOUR IDEAS?"

That's a fairly common question asked of writers. In the case of Chris Claremont, I think he got a good deal of them at one point from Dark Shadows. (We've discussed this before, but not since Rob started watching.) Laura Collins is a fairly obvious inspiration for Claremont's transformation of Jean Grey into Phoenix. If you think that's a coincidence, consider also Sebastian Shaw, Black King of the Hellfire Club, is a Dark Shadows character. [The "Hellfire Club" itself was taken from The Avengers (Steed & Peel).] The "timeslips" Phoenix experienced in X-Men were quite similar to the method of "time travel" shown in Dark Sahdows. Finally, the N'Gari (X-Men #96 & #143) were taken from Dark Shadows' "Leviathan" arc (which were in turn taken from The Cthulhu Mythos of H.P. Lovecraft.).

In addition, here are some other works of classic literature Dark Shadows adapted or borrowed from over the years...

Edgar Allan Poe's "The Cask of Amontillado," "The Premature Burial," "The Tell-Tale Heart," "The Pit and the Pendulm"

Henry James' The Turn of the Screw

"Orpheus in the Underworld" (mythology)

One of the reasons I've heard given for Dark shadows going off the air was that they ran out of things to adapt, but i don't believe it. (I think it was falling ratings.) True, the show had fallen into something of a rut in terms of adapting classic literature, but that doesn't mean they couldn't have come up with something original. The "Phoenix" story, for example, wile based on legend, is nowhere near the version as presented in Edith Hamilton's Mythology, and the first "Barnabas" arc isn't all that close to Dracula, either.

Oh, wow -- that's cool...! I'm excited to get to these adaptations. And while I haven't seen too much of The Phoenix yet (and don't know how it shakes out), the name certainly made me wonder. What's funny is how everyone takes pains to explain the legend of the Phoenix to someone -- anyone can miss a show, and you've gotta reinforce the important information! Plus, the Phoenix apparently didn't have the cultural currency that it does today -- you can say "phoenix" and everyone knows, in general, what you mean. Thanks, in part, to Dark Shadows and X-Men.

Oh, and I think we're eye to eye on Roger and Burke, Jeff. I might have been a little imprecise in what I first wrote. Not that a pass and a rebuff is impossible between them, but I doubt it happened. (But if I were writing fanfiction about that night 10 years ago, that's EXACTLY when it would have happened. It's a night everything changed between them -- so everything needs to be on the table!)

I'm up to episode 142... and apparently I'm not the only one who spotted the missing space on the bottom of the painting! It's intentional!

Plus, I love that everyone's talking about how grotesque the painting is when: a) it's not, and b) what's most unusual about it is unstated... that Laura is (at least suggested to be) nude in it. c) Which, OK, makes it REALLY weird that David wants it in his room. I can see why Laura would be upset, even if she weren't some otherworldly bird ghost lady who never eats.

Rob, I think I'm going to enjoy discussing the continuity ramifications of the 1795 arc with you. (Of course, that won't be for quite a while yet.)

"I'm up to episode 142... and apparently I'm not the only one who spotted the missing space on the bottom of the painting! It's intentional!"

We're caught up to you, Rob. Believe it or not, this won't be the last time Victoria becomes obsessed with a painting and brings it back to Collinwood.

Significant things happen along the Dark Shadows timeline in 1949, 1956 and 1966 (not to mention 1795, 1840 and 1897). If DS ever were to return to TV (as a remake rather than a continuation), I would like to see a This Is Us approach, jumping back and forth among eras. I think today's audience would enbrace such storytelling.

"I'm up to episode 142... and apparently I'm not the only one who spotted the missing space on the bottom of the painting! It's intentional!"

We're caught up to you, Rob. Believe it or not, this won't be the last time Victoria becomes obsessed with a painting and brings it back to Collinwood.