After Dark Crisis on Infinite Earths end, DC will be undergoing Dawn of DC -- a new linewide publishing initiative that will pivot certain ongoing series -- I've heard about the Superman books, Nightwing, and Harley Quinn -- and launch a bunch of new ones starring old favorites. There'll be 20 new ongoings* launched in 2023 as part of Dawn of DC, and the first 10 have been announced. They are (list lifted from Popverse):

Then, come July, presumably 10 more books will have a staggered launch. There's more detail about direction of the new books in the DC link at the top of this post.

I lost the story about eight issues in and stopped reading, but continued to buy. Same with Adam Strange. I do intend to finish both at some point. In both cases they were heading more toward Mister Miracle than Heroes in Crisis, so I feel comfortable recommending them. Looking forward to Danger Street.

No, I have not read his Mister Miracle, Cap. I've disliked so many of his stories, that I can't justify paying for his work. The only thing I can do at this point is vote with my wallet, so that I what I have done.

I've read Supergirl: Woman of Tomorrow. I know a couple of big Supergirl fans that hated it -- in large part because it's modeled on True Grit, with Supergirl in the Rooster Cogburn role, and it's narrated by a young girl who takes up much of the spotlight* -- but I really enjoyed it. Like most of King's stuff, it reads better all at once. (He writes it that way, and is usually finished writing the whole series before handing it off to the editor and the artist.)

*I'm simplifying their viewpoints here, and probably not doing them justice. But that was at least one significant problem they had with it.

Eric, I'd also suggest the new World's Finest series, which is also by Mark Waid and Dan Mora. It takes place some time ago, and I think it'd be right up your alley.

Cap, whatever you missed in Dark Crisis can be explained once the last issue is released -- most likely with a single sentence like "The multiverse is basically back."  (Which is odd to me, in that I already thought it WAS back.) Whatever happens there -- and I'm reading it -- I'm resolved not to care. The setting doesn't matter nearly as much as the characters, who I expect to be largely the same as they were this time last year, with slight situational tweaks (Ollie might remain "dead" for a while, or the Justice League might stay disbanded, but that's no big deal anymore.)

I can't believe I'm saying this, but I'm behind on the Crisis books. What the hell... has DC been rebooting THAT often?

The next time you're in your LCS, take a look at DC Greatest Events. 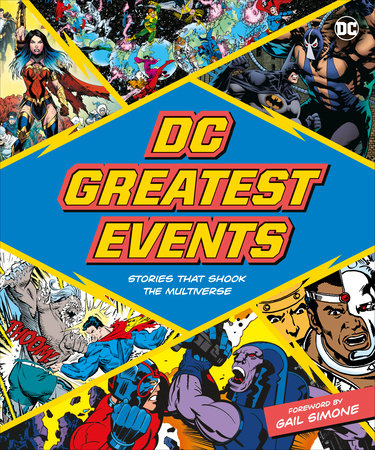 I'm not saying you should buy it; just flip through it.

Regarding Tom King (and especially Heroes in Crisis), I have a kind of theory about modern continuity that is only just now forming in my head. It used to be that certain stories were out of continuity, but certain elements of them were available to fold into the mainstream DCU (for example, the death of Jason  Todd from Frank Miller's Dark Knight Returns or Ted Knight's backstory from James Robinson's The Golden Age. Modern storytellers inject the same kind of elements into their stories for other writers to use or to ignore, but they do it in continuity. Ultimately, though, it doesn't really matter. Let stories like Heroes in Crisis rise or fall on their own merits because it's what's in your "head canon" that counts.

Jeff of Earth-J replied to Jeff of Earth-J's discussion The Pre-Defenders
"That's right, Luis... thanks for bringing it up. "The Return!" can be found in the…"
18 minutes ago

Luis Olavo de Moura Dantas replied to Jeff of Earth-J's discussion The Pre-Defenders
"The second story of Marvel Feature #1 is frequently glossed over, but worth mentioning.  It…"
1 hour ago

Jeff of Earth-J replied to Jeff of Earth-J's discussion T.H.U.N.D.E.R. Agents
"ISSUE #6: FADE IN. Toby/James awakens in a THUNDER hospital facility, Colleen at his side. "In…"
2 hours ago

Jeff of Earth-J replied to Jeff of Earth-J's discussion T.H.U.N.D.E.R. Agents
""What I like about this series is that it definitely takes place decades down the same…"
3 hours ago

Doctor Hmmm? replied to PowerBook Pete, the Mad Mod's discussion Anything, Everything, or Nothing At All
"If you happen live near an Ollie's Bargain Outlet ... my local Ollie's just received a…"
3 hours ago