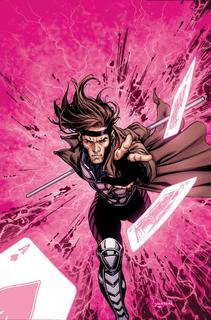 A couple of years ago, comic book writer Fred Van Lente was asked to pitch a Gambit series.  Van Lente took to Twitter and asked his fans, “What do I need to know to write Gambit?”  Unsurprisingly, Van Lente didn’t get the assignment.

Perhaps he should have asked comic book veteran Kurt Busiek.  Several years earlier, there was a rumor that Busiek was going to be offered the X-Men books.  I don’t know if there was any truth to the rumor but a couple of fans asked him about it on his website.  One queried, “What does Gambit need to become a good character?”  Busiek curtly replied, “A hole in the head.”

Clearly, Gambit has his detractors.  Admittedly, no character is universally admired.  Yet Gambit seems to incite especially intense loathing.  As a Gambit fan, I’ve long tried to figure out why.

On a related note, I suspect that a lot of fans viewed Gambit as a Johnny-come-lately when he first joined the X-Men in 1990.  Gambit was the first new X-Man since Dazzler, Longshot and Psylocke were added to the team in 1986.  However, those other heroes had already been introduced and established in other titles so they weren’t exactly rookies when they joined up.  Gambit was the first brand-new character to join the X-Men since Colossus, Nightcrawler and Storm were recruited as part of the All-New, All-Different team back in 1975.  A lot of other characters have followed in Gambit’s footsteps since then but it wouldn’t be surprising if some residual resentment stuck to him.

Yet I don’t think those explanations go far enough.  If one asked a Gambit detractor what they don’t like about him, they would most likely point to three identifying features: his accent, his trench coat and his history as a womanizer and a thief.

I can’t really defend the accent.  Or, at least, I can only defend it half-heartedly.  When Len Wein and Chris Claremont introduced the All-New X-Men in 1975, they used accents and colloquial phrases like “Bozshe Moi” and “Zum Teufel” to add a bit of character to their international heroes.  But comic books had generally become more sophisticated by 1990 (Claremont deserves some, though certainly not all, of the credit for that).  An accent was no longer adequate shorthand for indicating a character’s different background.  Unfortunately, X-Men writers- including Claremont himself-used the accent as a crutch instead of a tool.   It became an impediment to a lot of fans, as well as a reason for ridicule.

Even so, I don’t think the accent is unsalvageable or unmanageable.  When viewed as part of a historical continuum, it’s entirely understandable.  It’s the descendant of Nightcrawler’s butchered German and Colossus’s bad Russian.  And, when used sparingly, it can add a bit of spice to Gambit’s dialogue.

A historical perspective of comic books is also a key to understanding, explaining and defending Gambit’s trench coat.  When Joe Shuster and Jerry Siegel first created Superman, they needed a way to visually demonstrate his powers.  They instinctively added a cape to his costume.  The cape could be used to show movement, speed and even flight.  We all know that Superman is flying fast when his cape flattens out behind him.  We know that he’s slowing down for a landing when it billows up.  The cape served a crucial purpose in the early days of comics.

In the Golden Age, a cape was de rigeur for any superhero worth his stripes.  However, over the years, the cape lost its lustre.  During the Silver Age, the cape was slowly phased out while artists like Steve Ditko, Gil Kane and Wally Wood introduced sleeker, simpler designs.  Yet the issue of indicating movement didn’t disappear.

X-Men artist Jim Lee devised a new approach.  He gave Jubilee a bright yellow raincoat, in imitation of Robin’s yellow cape.  The raincoat similarly billowed out behind her when she jumped off of a rooftop.  And he gave Gambit a dusty brown trench coat in imitation of Batman’s dark cloak.  It’s actually pretty clever.  Lee took a common fashion accessory- one that was in vogue at the time- to address the age-old issue of indicating movement.  It trailed behind Gambit as he delivered a spinning kick.  It flowed behind him as he ran.  And it even helped him blend into the shadows, Batman-like, when he needed to hide.

I’ve heard all the complaints.  “Why does Gambit need a big, warm trench coat when he lives in New Orleans- one of the hottest cities in the US?”  Well, Gambit’s first appearance came when Storm was having difficulty controlling her powers and Cairo, Illinois was beset by the bad weather of fog and cold.  Then, when he joined the X-Men, he moved to Westchester County, north of New York City.  It shouldn’t be surprising that someone from the south would dress more warmly than most.  I admit that it doesn’t make sense for Gambit to wear a big trench coat every time he goes home.  It’s more of a trademark thing for the fans than an in-story consideration.  Yet, even in New Orleans, people wear lightweight trench coats including the main character in the New Orleans-based “A Confederacy of Dunces.”  That’s probably not the best model for Gambit, but it does show that the fashion isn’t as inappropriate to the location as Gambit’s detractors insist.

Finally, there’s Gambit’s background as a womanizer and a thief.  This objection surprises me more than the others.  There’s a long history of popular thieves in fiction from David Niven in “The Pink Panther” to Michael Caine and Steve Martin in “Dirty Rotten Scoundrels.”  And there’s a long history of heroes who are also womanizers, most notably James Bond.

Yet the character with the closest correlation to Gambit is none other than Han Solo.  They have practically the same profession.  Solo is a smuggler, Gambit a thief.  They both have a sly, ribald approach to women.  Han Solo famously tells Princess Leia, “You like me because I’m a scoundrel.  There aren’t enough scoundrels in your life.”  They both initially join the side of the heroes for selfish reasons.  Han Solo declares, “I expect to be well paid.  I’m in it for the money.”  Yet, when the chips are down, they step up as true heroes.  They’re the kind-hearted rogue- the scoundrel with a heart of gold.

If Fred Van Lente had asked me, “What do I need to know to write Gambit?” I would have told him, “Write him as if you’re writing Han Solo.”

Despite the accusations of philandering, Gambit has been remarkably faithful to Rogue.  All of his indiscretions occurred before they met.  They only become complications when Rogue learns of yet another prior liaison.  Yet, despite their reputations, Rogue is the one who’s strayed- not Gambit.

Gambit’s past as a thief also shouldn’t be an issue.  He’s not exactly unique in that regard.  Storm was a pickpocket and thief before becoming an X-Man.  Banshee robbed a bank as part of Factor Three and Rogue was a member of the Brotherhood of Evil.  Plenty of X-Men have shadows in their past.  At this point in his life, Gambit is more like Robin Hood or the cast of “Leverage.”  He uses his skills for good, robbing super-villains of critical components for their super-devices.

I don’t expect that I’ve changed anyone’s mind about Gambit.  I doubt that a Gambit detractor has suddenly become a fan.  But maybe, just maybe, I’ve offered a new perspective and a Gambit-hater or two can perceive the visual cleverness of the costume design or at least appreciate his standing as a classic rogue character.

I enjoyed the article, Chris.  I neither love nor loath Gambit.  The truth is I've never encountered him that much.  I wasn't following the X-titles at all when he debuted and I've never followed a book he was starring in.  When he did show up as a guest star in a book I was reading, it was usually in a crowd scene as one of many X-Men.  He never left much of an impression on me.  His accent doesn't bother me, in fact, being Cajun means at some point his ancestors probably came from my part of the world (google it folks!).  I don't care about his trenchcoat or background as a thief.  I guess his rep as a womanizer seems a bit overblown, based on what Chris says.

His reputation as a dislikable character would be the reason I didn't try any of his solo series.  Now he is in All-New X-Factor, and I will give anything by Peter David a try.  I enjoyed issue #1 and Gambit was front and center.  So far so good.

I think the Han Solo comparison is an interesting one.  Han is a mercenary but he's also a guy you would want at your side when the odds are against you, and for all his bluster, he doesn't let his friends down.  I think more people see Gambit more as Lando Calrissian, the guy who will sell you out if that's the better deal for him.  Plus, I think readers saw him as someone who got the girl without trying very hard and had a past as someone who went from girl to girl.  My guess is not many readers saw much of themselves in Gambit, but rather he probably reminded them of a guy we all knew in high school and didn't like very much.

I never warmed up to Gambit, but it would be surprising if I did.

Mostly it is the time period when he was introduced.  The late 1980s were a difficult time to be a Marvel fan, with so many dark turns and characters.  And the X-Men specifically began to look a bit too manipulative for confort.

I had no interest in reading about a team that included a Psylocke that kept so many secrets, three characters (Longshot, Wolverine and Gambit himself) that I was apparently destined to like regardless of whatever they actually did or how, a Storm that seemed to revel on her lack of both compassion and fashion sense.  It helped that the art was so often atrocious, and that at least half the characters everywhere were being written as Mary Sues.

Gambit was just a bit more questionable than most characters of the time, and just a teensy bit more pushed though our throats.

If it helps any, I dislike Longshot (except in X-Factor) and Wolverine far more than I dislike Gambit.  But that is faint praise.

Come to think of it, I don't mind the trenchcoat nearly as much as I mind the silly 1990s headgear.  Didn't he just lose it in tne All-New X-Factor?

PAD very wisely removed Shatterstar's similar headpiece and that alone went a very long way towards making the character palatable.  I fully expect the same to happen with Gambit.

I agree that it's generational. I never had a very strong opinion about Gambit -- or really even any of the X-Men after Kitty Pryde was introduced. Mostly I find Gambit redundant -- the role of "mysterious rogue hero" he was created to fill was the role Wolverine had recently vacated.

Far from Han Solo, I'd say his analogue was much more Lando Calrission at the end of Empire - where he's sitting in Han's seat in the Falcon, wearing Han's clothes.