1)I thought the werewolf was pretty well-realized in this. I'm not sure how an alien werewolf leads to Shaolin monks in Scotland, but, oh, well. There were some genuinely scary moments in this. The implication that the royal family are all werewolves - well, that would explain alot about those people.

2)Of course, the space werewolf was just a prop for what this episode was really about - the secret origin of Torchwood.  Only RTD would come up with a spin-off based on an anagram of the show's title.  Still, it could've been worse - it could've been How Cod Rot or Hot Rod Cow.

3)Queen Victoria was played by Pauline Collins, who played nearly-a-companion Samantha Briggs int he Second Doctor story "The Faceless Ones". I remember her mostly from a sitcome she did back in the day called No, Honestly, which I remember being shown on PBS when I was a kid. I thought she was quite good in this, playing the Queen as a tough old bird - it certainly seeems as though she shot Father Angelo dead, although we don't see it. I like the bit at the end where she knights our heroes ("Sir Doctor of TARDIS", "Dame Rose of the Powell Estate") and then kicks them out after reading them the Riot Act and telling them to change their ways.

4)The Doctor and Rose were a bit smug in this one, not always taking things as seriously as perhaps they should, and Rose in particular being somewhat obnoxious over trying to get the Queen to say she's not amused. I think Victoria wasn't 100% wrong about them in the end.  I did like the fun they had with the accents - must've been interesting for Tennant to have to pretend that his real accent was a fake one. I also liked the way Rose looked at the diamond at the end - like she was almost hypnotized by it. And of course, the reference to "James MacCrimmon".

Overall:  This was pretty good - somewhat improbable in parts, but not impossibly so for Doctor Who. As a set-up for a spin-off, it's not too clunky, and I like the shows where they go into Earth's past.

I have nothing to add about the Doctor Who episode in question, but I am currently in the midst of re-watching the “werewolf” story on Dark Shadows, and it occurs to me how much better it could have been with convincing special effects. As it is, it’s one of my least favorite storylines because of the unconvincing transformations. Not only that, but Alex Stevens (Frank Sinatra’s stunt double in the movies), was a foot shorter than either of the two characters who transformed into werewolves on the show.

I agree.  Just think about the difference between the Zarbi or even the Wirrn, and the Vespiform, for example.

I would pay good cash money to see an episode of Hot Rod Cow. 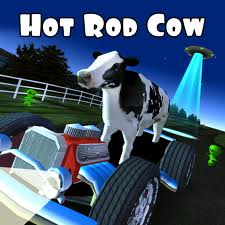