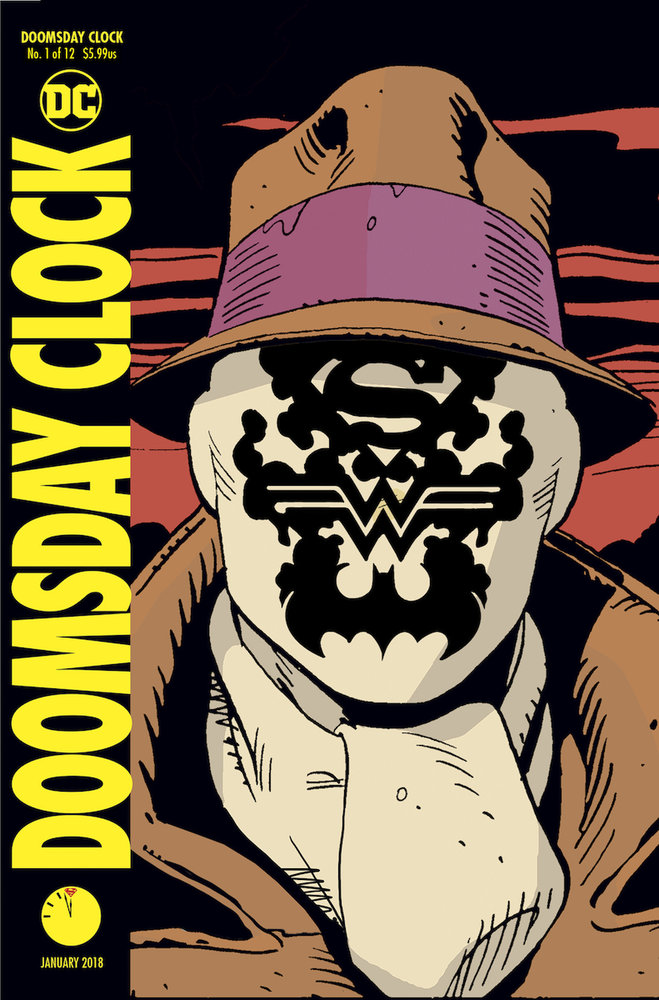 I wasn't surprised that Ozimandias said that Lex Luthor was the smartest person on the planet. I was a little surprised that he said Bruce Wayne was the second smartest. Quite a coincidence that they're both rich white guys from the U.S.

Everything works well. I love page 28. "You ate my breakfast" and the big reveal.

He must have something going on. Smashing his head through the teller's plexiglas cage has to be a metahuman power.

“I guess I've come to think of these follow ups as occurring on a parallel earth that is identical to the Alan Moore earth but separate from it.”

I agree, and that’s the way I feel about Superman and the other DCU characters as well. As Cap put it, he’s a “sort of combo Superman,” but I’m not going to spend too much time trying to work it out.

“So far, Johns is channeling the spirit of Watchmen, without slavishly repeating it. I enjoyed the first issue, even though some part of me felt a little guilty.

What he said (but carried over to the series itself, not just the first issue).

What you guys said! I have no problem keeping this separate from the original story.

I have to say that I also have a problem with both of the "smartest men on earth" are rich white guys, but I can just assume that the data was skewed to Ozymadias's idea of what it means to be smart.

My problem with the "smartest person on Earth" trope isn't that it's two white men, but that it always turns out to be someone in the technical sciences. Why no poets or philosophers?

The story needs for the two smartest men to be Batman and Luthor, so I can rationalize it as "the two men with the greatest education and scientific expertise, coupled with the resources for practical application."

Yes he sure is! I always find the look in the eyes of his characters to be terrifying*, but I think it really works here.

*I have always felt this way about certain artists--George Perez and John Buscema are two other artists whose characters (especially Buscema's women) always seem to have that "thousand yard stare" in their eyes.

* So Rorschach isn't who I thought it was, which was the psychiatrist. Maybe his son?

* Mystery solved on The Mime's weapons: They exist. Maybe he summons them from sub-space? Invents them with psychokinesis? It'll be interesting to hear how that works.

* "Mr. Thunder" is in a rest home. Johnny Thunder? We haven't heard from him since "Rebirth" #1, have we? Perhaps the JSA is returning?

* And maybe not as kids, as I feared. The prose material in the back refers to Libby Belle, John Law and Ted Grant, in their proper time periods. Did Dr. Manhattan erase their history from the 1940s? And somehow miss Johnny Thunder? Or did Johnny Thunder do it himself somehow?

* I'm cheesed that you-know-who is alive and kicking. I know he's a great character and all, but I prefer they use what's left of Watchmen rather than change the story. That's a bridge too far for me.

Last week, Cap, you questioned the point of the series. I don’t, myself. Series I question are those such as the ones featuring Will Eisner’s Spirit reinterpreted by modern creators. Personally, I have “no business” reading those series because I haven‘t read all of Eisner’s Spirit myself yet. In this case, I’ve read “all” of Alan Moore’s Watchmen (and the non-Moore “After Watchmen” stuff, too), and there ain’t no more of that coming. Also, it’s a chance to see characters from two different universes interacting, like the Avengers/JLA series from several years ago. That is point enough for me.

Fair enough, Jeff. And if this series somehow returns JSA history to its proper place, I will have no complaint whatsoever.

Incidentally, the prose material is about movie actor Chris Colman, who played Nathaniel Dusk in the movies. Nathaniel Dusk is a private detective created by Don McGregor and Gene Colan in the long-before time in a series of crime noir miniseries. Doomsday Clock re-imagines this character as the star of a movie series, who was murdered (like George Reeves?) with the murder weapon being one of his own awards (like Nite-Owl I?).

Interestingly, Colman claimed to have grown up on a farm (like Clark Kent?), but nobody can find it -- it was obviously a fabricated history. And in his home, police found a hidden room full of clocks -- he was obviously fascinated by them, or at least their imagery (like Dr. Manhattan?).

Incidentally, the screenplay for the final Colman movie was by John Law, whom we know was also The Tarantula.

Not sure what any of this means, but they wouldn't be wasting all those pages if it doesn't tie in to the main story somehow.

The prose material mentions the Tam O'Shanter restaurant, the oldest of the Lawry's restaurants, and the closest one to where we live. Some years ago, our friends who own the comic book store wanted to celebrate some milestone at the Lawry's in Beverly Hills and we convinced them to go to Tam O'Shanter instead. They were happy with it. It's authentic in-story because it opened in 1922.

Jeff of Earth-J replied to Steve W's discussion A Cover a Day
"A mere 1000 issues? What a newcomer! As I pointed out on the "Three of a kind"…"
41 minutes ago