Everybody (except the U.N.) is celebrating Wonder Woman's 75th anniversary! 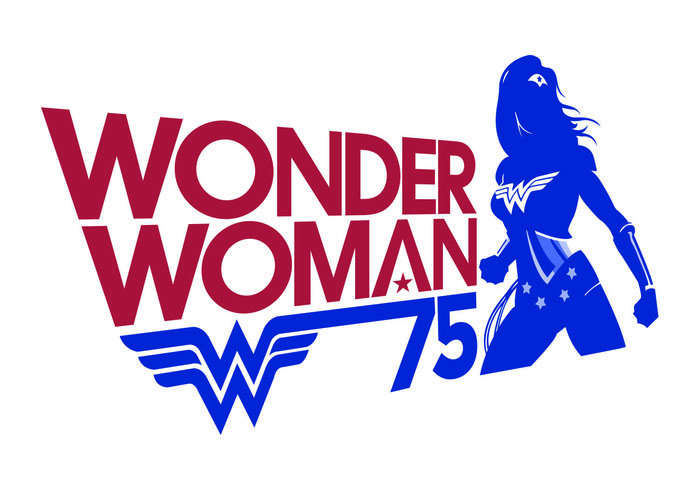 It’s Wonder Woman’s 75th anniversary, and lots of people are celebrating. The United Nations, on the other hand, just fired the Amazing Amazon because of her wardrobe.

That’s ugly. And it started out so promising.

On Oct. 17, the U.N. named Wonder Woman the Honorary Ambassador for the Empowerment of Women and Girls at the United Nations headquarters in New York. Showing up to accept were Lynda Carter (who played Wonder Woman on TV, 1975-79) and Gal Gadot (who played the Amazon Princess in Batman v Superman: Dawn of Justice this year, and will again in both Wonder Woman and Justice League next year). 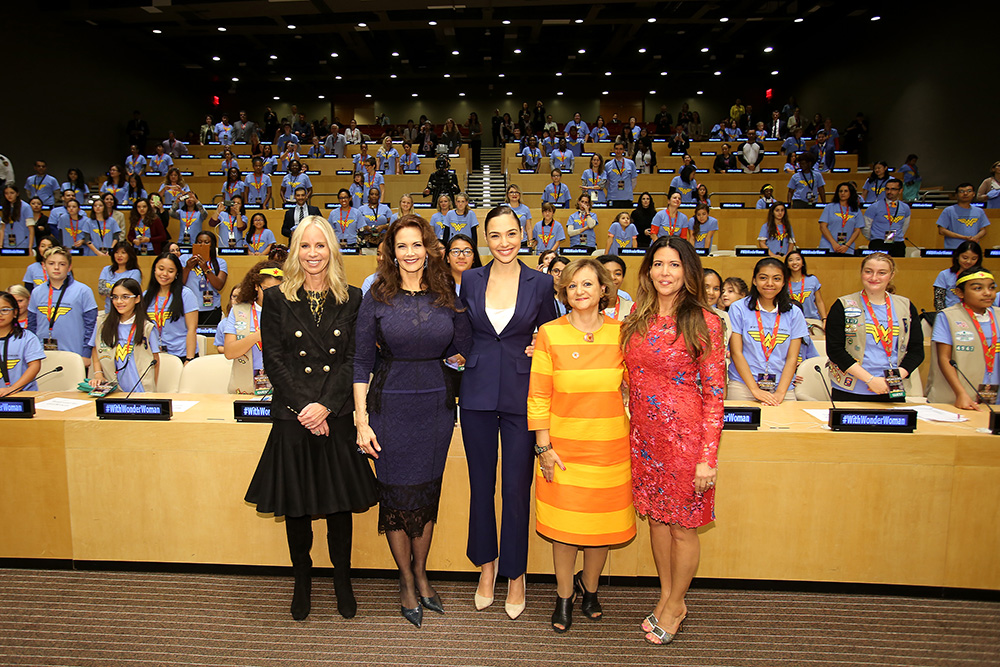 Family and friends of The United Nations cheered on the designation of Wonder Woman as its Honorary Ambassador for the Empowerment of Women and Girls in a ceremony on Friday, October 21, a date that also commemorates the iconic Super Hero's official 75th anniversary. On hand to mark the historic occasion (from L to R) were DC Entertainment President Diane Nelson; Lynda Carter, star of the 1970s television series; Gal Gadot, star of the forthcoming "Wonder Woman" feature film; United Nations Under Secretary-General Cristina Gallach; and Patty Jenkins, director of the forthcoming “Wonder Woman” feature film. Courtesy DC Entertainment Inc.

It was the first time Carter and Gadot had ever appeared together, and they were cheered by lots of little girls dressed in Wonder Woman outfits. Joining all these wonder women (and women-to-be) were two more powerful women, Patty Jenkins, the director of “Wonder Woman”; and Diane Nelson, president of DC Entertainment, president of Warner Bros. Consumer Products and president/chief content officer of Warner Bros. Interactive Entertainment.

At first, the U.N. folks were very welcoming. From Businesswire.com:

“While the world has achieved progress towards gender equality, in many parts of the world, women and girls continue to suffer discrimination and violence. Gender equality is not only a fundamental human right, but also a foundation for a peaceful, prosperous and sustainable world,” said U.N. Under-Secretary-General for Communications and Public Information, Cristina Gallach, “and Wonder Woman will be another valuable partner for us to achieve such a world by inspiring her millions of fans worldwide to stand up for gender equality.”

Carter had equally warm words to say. From previewsworld.com:

“In some magical and mystical way, there lies within each of us Wonder Woman,” Carter said. “She is real. She lives and she breathes. I know this because she lives in me, and she lives in the stories that these women tell me, day in and day out. I see it in the letters and in the stories. I read it on social media. I see it in the tears that fall from the eyes of the women who say it saved them from some awful thing that they endured — because they saw that they could do something great.”

DC Entertainment also quoted the actress as saying, “The greatest honor and responsibility of playing Wonder Woman was serving as a role model for fans around the world, particularly girls. I’ve seen first-hand how a powerful yet compassionate superhero can inspire women to believe in themselves and men to support equality.”

“How awesome is she?” Gadot said in an Entertainment Weekly interview. “And I do think she should be the president of the United States. She is fantastic, and after knowing her even for a little bit from this morning, it makes so much sense that she was the first one to embody this iconic character because she is the character in flesh. She is strong and inspiring and loving and good and smart and confident, and the list goes on and on.” 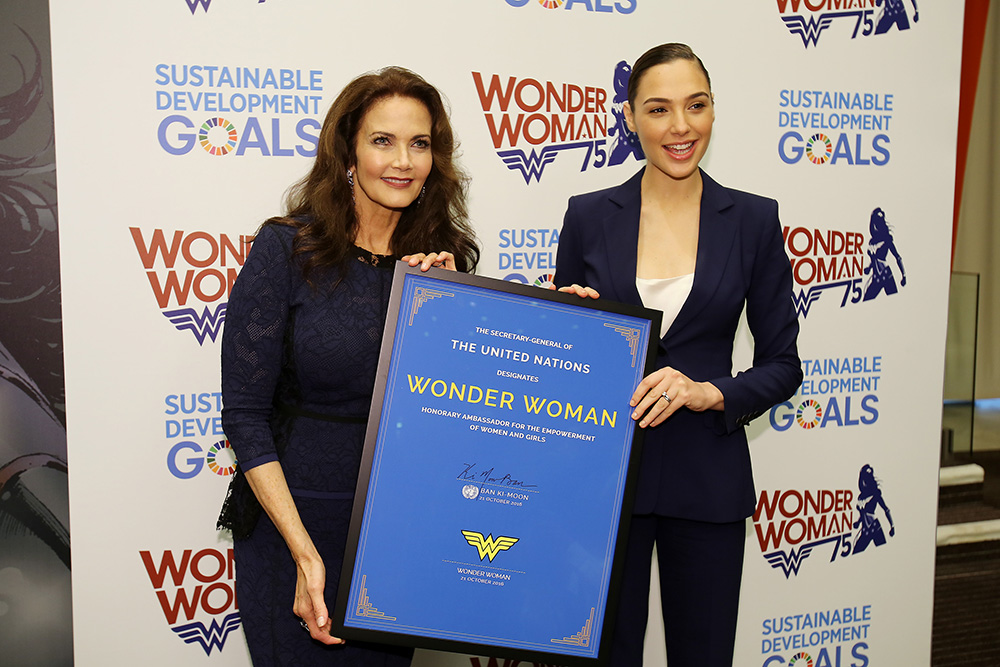 The United Nations designated Wonder Woman as the UN Honorary Ambassador for the Empowerment of Women and Girls in a ceremony on Friday, October 21, a date that also commemorates the iconic Super Hero's official 75th anniversary. On hand to mark the historic occasion (from L to R) were Lynda Carter, star of the 1970s television series; and Gal Gadot, star of the forthcoming “Wonder Woman” feature film. Courtesy DC Entertainment Inc.

Of course, there are always party poops and nay-sayers, which in this case included a group calling itself Concerned United Nation staff members. They posted a petition on the matter, stating in part:

“Although the original creators may have intended Wonder Woman to represent a strong and independent ‘warrior’ woman with a feminist message, the reality is that the character’s current iteration is that of a large-breasted white woman of impossible proportions, scantily clad in a shimmery, thigh-baring body suit with an American flag motif and knee-high boots – the epitome of a ‘pin-up’ girl. This is the character that the United Nations has decided to represent a globally important issue – that of gender equality and empowerment of women and girls.”

Eventually 45,000 people signed the petition, and lo, the United Nations has ended the campaign – Wonder Woman’s last day as Ambassador was Dec. 16. Although, according to the New York Times, the U.N. denies any connection between the decision and the petition.

Was it because Wonder Woman is fictional? No, the U.N. has had fictional ambassadors before, according to Slate.com, including Winnie the Pooh and Tinker Bell.

Is it because the U.N. is so completely free of sexism that they found the idea offensive? No, this is the same organization that, according to the Times, “rejected seven female candidates to be its next secretary-general, before choosing a man.”

Alas, it appears that the U.N. – or at least the 45,000 people who signed the petition – still judge a woman by what she wears, instead of what she does. I guess, when it comes to being fired, Princess Diana’s clothing suggested she was just asking for it.

But not everybody is so humorless about the Amazon Princess. In fact, some are quite vocal in support:

* On Oct. 7, the United States Postal Service released a sheet of Forever stamps featuring four different versions of the Amazon Princess from four different eras.  “Wonder Woman was one of the first female Super Heroes that inspired countless young girls over the past three quarters of a century,” said U.S. Postal Service Chief Information Officer and Executive Vice President Kristin Seaver. “We salute this heroic role model and her legacy that is sure to continue to span another 75 years.”

* Downtown Bookworks has released The Big Book of Girl Power, joining My First Wonder Woman Book and My First Book of Girl Power for youngsters.  “It's an important book for young girls,” said Big Book author Julie Merberg,  “but we’re expecting grown-ups to buy this book for the boys in their lives as well. As I’m constantly telling my four sons, women are every bit as powerful as men … moreso in many ways. And the sooner they learn that, the better.”

A scene from “My First Book of Girl Power” features Wonder Woman and a number of other DC heroines. Copyright Downtown Bookworks

And those sentiments, not the clothes Diana wears, are what make this character important and vital enough to last 75 years. As Nelson said at the U.N. ceremony:

“Wonder Woman has long stood with Batman and Superman in the trinity of DC’s most iconic super heroes, but she also stands alone as a symbol of equality, justice and female empowerment and is more relevant today than ever,” she said. “With her roots in Greek mythology and American feminism, Wonder Woman is one of the most unique and compelling characters in comic book history; her longevity is a testament to her global appeal and the special place she holds in the hearts of generations of girls who have imagined wielding their own lassos of truth.”

As Diana herself would say, “Hola, Diane! Well met!”

There isn't anything that can't be turned into a controversy is there?

I'd be more impressed with this protest if it was based on somebody actually reading Wonder Woman stories from the '40s.

Or any Wonder Woman comics, really.

Frank Burns Syndrome. Larry Linville said Frank should be feared, not laughed at, because he had the power to do horrible things if he really put his mind to it.

Lynda still looks like she could do the part herself.