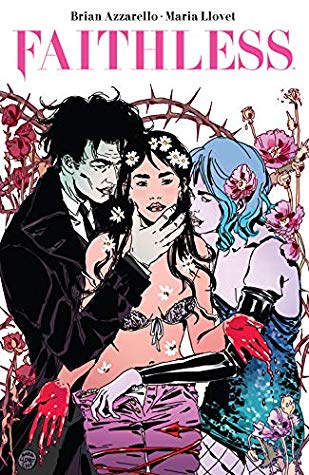 Faith is an artist, who is also dabbling in magic. The magic feels minor, until she meets Poppy. And after she becomes involved with her father, a famous artist named Thorn, her love life soon revolves around both of them. As her friends start dying, the cost of her relationship with Thorn is apparent--to an old vagrant woman she keeps running into (and who is apparently a magician)--but not to her.

Thorn finally makes the classic offer for her soul (although not stated flat out), offering her an artist's career. As the series ends she has cut all ties to her old friends and is living the life of a glamorous celebrity, escorted by Thorn and an entourage. A second series has  been announced, so the story will continue.

Llovet has a loose, expressionist style that suits the story well. She sometimes uses sound effects (including song lyrics) to dramatic effect, wafting them through the panels like another character. The collection includes an especially impressive selection of alternate covers and pinup art, featuring Paul Pope, Lee Bermejo, Fábio Moon, Cliff Chiang, Eduardo Risso and others.

Permalink Reply by Wandering Sensei: Moderator Man on February 2, 2020 at 11:37am

I will have to get this. I did read the first one or two issues, but then I missed one and figured I'd wait for the trade. Looks like I need wait no longer!