Fan of Bronze: Kamandi Without the King

Of all of JACK KIRBY's 70s DC work, the book that lasted the longest was Kamandi the Last Boy On Earth which lasted fifty-nine issues but not with the King at the end. #33 (S'75) was the last issue that was written, drawn and edited by Kirby, #37 (Ja'76) that last one written and #40 (Ap'76) the last one drawn. All this was explained by the new editor, GERRY CONWAY in the letters' page of his first issue, #34 (O'75), telling readers that Jack was moving on with his career without saying that he was returning to Marvel. The first thing he did was commissioned the legendary JOE KUBERT to do the covers. And they were great, energetic and primal. While it was heresy, then and now, to suggest it but it would have been amazing if he had the chance to actually draw the book!

But Kirby wasn't slacking off despite his upcoming exit. He continued to create new characters like the alien Pretty Pyra and the genetically altered Arna. His battles scenes between the Tiger and Gorilla warships were astounding! He even took Kamandi into space!

Since these issues have never been reprinted (and I have them out), I thought that I would go through them and see if they hold up in my opinion as I always liked them!

Please feel free to add, suggest or augment this!

Ooh, great thread! I first was introduced to Kamandi after Kirby had already gone. I think I read a few of the previous issues at a friend's house -- including the Karate Kid crossover -- but I don't think I picked one up for myself until issue 59 -- a final issue that ended in a cliffhanger! Nonetheless, I developed a great love for the character, and am slowly making my way through the Kamandi Omnibus as we speak! I've enjoyed the post-Kirby issues I have, too, but I don't have a lot of them -- they always seem a little harder to find!

Interestingly enough, it would take about a year after Jack Kirby left DC for them to bring back his Fourth World books. New Gods #12 (Jl'77) and Mister Miracle #19 (S'77) were out at the same time as Kamandi #51.

Another piece of the puzzle from this period was Superman #295 (Ja'76) which states that Kamandi's Earth takes place in an alternate 30th century, different from the Legion's. It uses Kirby's "Mighty One" story from Kamandi #29 (My'75) and furthers it by saying that it would be Superman's descendants that rebuilds and retakes the world from the evolved Animals and restores humanity to their previous place in the pecking order!

I never liked the idea that Kamandi was in the 30th century which would be reinforced later. The ruins and machines that he finds never look that antiquated or decayed. Also it's implied that the future Supermen either conquer or eliminate the Animals which is a very un-Superman action.

But when Superman #295, written by Elliot S! Maggin, came out, Gerry Conway was already Kamandi's editor and about to be its writer. Kirby was already on his way out and was probably crafting The Eternals by then. 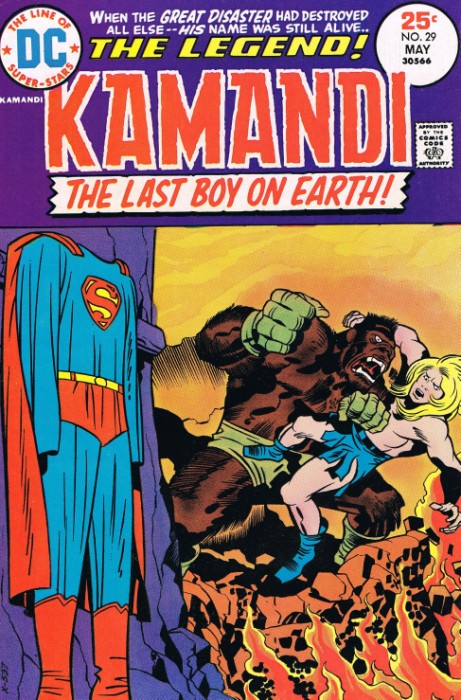 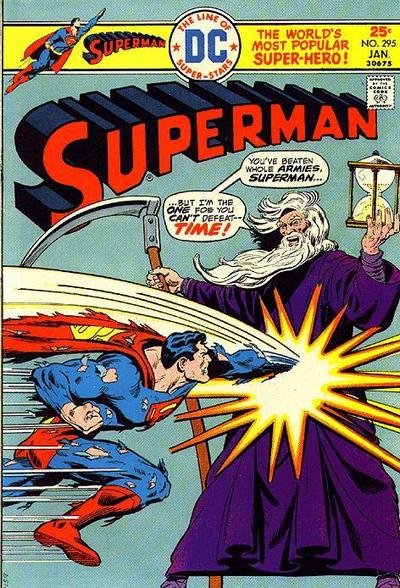