I don't suppose anyone has a list of pitchers and balls for the fastball special?

By pitchers I mean the likes of Colossus and She-Hulk.

By balls, I mean whoever was being thrown.

Golden Age heroes with sidekicks sometimes used athletic team-work. The question is what qualifies as a fastball special. X might toss Y with a swinging motion rather than a javelin throw, feet-first rather than head-first.

In Star-Spangled Comics #3 the Star-Spangled Kid jumps onto Stripesy's palms and Stripsey propels him several stories high (!) with an upward motion. In #4 they catapult the Kid up to the hovering Star Rocket Racer using a tree.

I posted an instance with Blackhawk and Chop-Chop from Modern Comics #86 here.

In Justice League of America #160 the heroes' journey through time is blocked by a super-dense barrier. The Star-Spangled Kid fills Superman with star-energy and the Earth-Two Wonder Woman uses Supes as a living missing, throwing him like a javelin.

I'm thinking I'd define it as any character throwing another character at an obstacle with their permission. Wonder Woman throwing Superman in that instance would count, as would the Star Spangled Kid examples.

There are two instances I can verify with a minimum of effort.

(I'll get back to you on the second.)

I have a memory of one character (probably an X-Man) grabbing another (possibly by surprise) and administering a "fastball special." I thought that might have been from the Uncanny X-Men/New Teen Titans one-shot but its not (although that comic does contain a traditional FBS, Colossus throwing Wolverine). I also seem to think one time Wolverine might have suggest that Hulk throw him against a foe, if that sparks anyone's memory. Also, the online Marvel Database does have a "Fastball Special" entry. 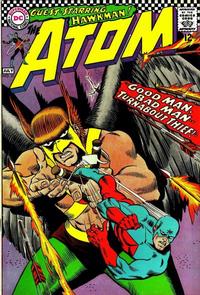 Well, at least once!

If that counts, what about this? I vaguely recall Carol (then Ms. Marvel) throwing Wolverine and calling it "Fastball Special, Avengers Edition" at the time when they were both members of the New Avengers.

IIRC Wolverine also threw Colossus (instead of the other way around) in the last installment of the first Proteus storyline (#129 back in 1979, perhaps).

The first FS may have been motivated by the need to rescue Banshee from a pterosaur in the Savage Land at some point circa #120.

There are instances of characters throwing the Atom. Air Wave throws him in Action Comics #514. I can remember an instance from Justice League of America too but can't place it.

Luke Blanchard replied to Jeff of Earth-J's discussion Tales to Astonish
"The Executioner doesn't have his axe. It was taken off him when he was exiled to Earth in…"
2 hours ago

Richard Willis replied to Steve W's discussion A Cover a Day
"I don't have a transition cover. This final cover from me is not quite a courtroom but…"
2 hours ago

Lee Houston, Junior replied to Steve W's discussion A Cover a Day
"It is now after midnight where I live and since I will be away from my computer for most of Tuesday…"
5 hours ago

Jeff of Earth-J replied to The Baron's discussion Movies I Have Seen Lately
"They probably would have written this down. Ya'd think. This sounds like the…"
9 hours ago

Richard Willis replied to Captain Comics's discussion Comics Guide: Jan. 30-Feb. 5, 2023
"And when did Marvel start spelling the title "Captain Mar-Vell"? My guess would be to…"
11 hours ago

Lee Houston, Junior replied to Steve W's discussion A Cover a Day
"Don't have much left but here's today's, courtesy of the Grand Comics Database."
12 hours ago

ClarkKent_DC replied to Peter Wrexham's discussion Celebrity Mastermind - "The History of DC Comics"
"Nipsey Russell was in the cast of Car 54, Where Are You? But the bulk of his career was…"
12 hours ago

Richard Willis replied to The Baron's discussion Movies I Have Seen Lately
"Jeff of Earth-J said: Twelve minutes from the end of the film, Elton gives his theory of what has…"
12 hours ago