I've started a thread on Golden Age comics before. My idea was to review runs or portions of runs, but that turned out to be difficult to do; Golden Age features sometimes changed direction in significant ways, so to get a full overview of a long-running feature one has to read a lot of stories. The result was I ended up only reviewing short-running series or one-shots.

So I thought I'd start a thread for reviews of individual issues instead. I mean to review comics from the 50s as well as the 30s and 40s. Please feel free to contribute your own reviews.

I've included the transition era in the scope of the thread so there need be no debate over when exactly the Golden Age ended. Any pre-Silver Age title is fair game. DC's Silver Age is usually regarded as starting with the Silver Age Flash's debut in Showcase #4, which went on sale in July 1956. The analogous event at Marvel was the appearance of Fantastic Four #1 in August 1961.

The Marvels remained popular at least up until DC brought them back, but I doubt most people knew or cared what company made them or what characters they interacted with.The people writing those comments of his probably had only vague memories. Obviously they didn't have a Fawcett comic for reference or it would have turned up in the show.

I remember a Hulk story where Hulk was hit by a strong electrical current to knock him out so the army could capture him. The caption in the panel, written by Roy Thomas, said "Shazam! Billy Batson said that." I'm surprised Roy didn't write the Captain's adventures at DC. I think the Hulk story came out just before DC got the license.

He only appeared from 1944-47, so he was a couple of years gone by the time of the Korean War. But Radar could still have known about him, of course. Fawcett did some Korean War-themed stories in its Marvel Family titles.

There was an episode late in the series (I think Radar was already gone) that said it was Christmas 1951, only four years since comic book Radar's last appearance, so if he knew the character it would still be pretty fresh in his mind, especially if he often reread his older comics.

If my memory isn't playing tricks the "Shazam! Billy Batson said that." line is from the Psyklop/Jarella story in Incredible Hulk #140, when the Hulk is zapped by Jarella's magicians and acquires Bruce Banner's brain. The story was continued from Avengers #88, which has a very self-indulgent allusion to the statues of the Seven Deadly Sins in Shazam's cavern that was likely incomprehensible to many readers.

You're right. Just looked it up and it came right after a panel saying "Any smoothly-functioning technology will have the appearance of witchcraft, Arthur C, Clarke said that." Jarella was very feminine there, although a later story made her a warrior queen. Trimpe's Betty wasn't that pretty but his Jarella was, suggesting he liked Jarella more.

This issue contains four Don Winslow stories. In the first, he sails as a member of an Arctic expedition, and finds and brings back its leader after the latter breaks his ankle. In the course of doing this he fights and kills a polar bear with only a knife. In the second, he's sent after a lady pirate called Singapore Sal. This character returned several times. In the third, Winslow and his assistant Red help a taxi driver friend find a new career. In the last Winslow sorts things out for a young recruit framed for robbery from the navy stores.

Winslow is a stock hero and not interesting as a character, but the stories are OK and the art is in a clear style and at times lively, particularly in the third and fourth stories. I'm not sure whether all the stories were drawn by the same artist. The fourth story has a "Drawn by John Jordan" credit at the bottom of its first page.

The issue also has a couple of comics form ads, including one selling girls' clothing that uses Mary Marvel. ("You look wonderful, Mary. Those dungarees are just like western jeans!" "And aren't our plaid shirts grand? Just like that handsome cowboy's!") The text story is an account of the Battle of the Nile.

Did Mary ever wear dungarees? Every Fawcett story I remember with her had her in a skirt. In fact she always seemed kind of old-fashioned, probably because of her rich stepmother (who I don't think even knew Mary wasn't her daughter.)

Fiction House insisted on stock heroes for some reason. There's a saying that they were the most looked at comics of the time but the least read. I can see writers not bothering to give their characters much personality, but not why a publisher would want bland characters.

In the ad the outfit is represented as a western costume. By dungarees it just means jeans. The cover of Mary Marvel #28 has her in a western version of her Marvel costume, with trousers, but I don't think it illustrates a scene from one of the issue's stories.

Don Winslow was a newspaper strip character in origin, but Fawcett's series featured original stories. The Fawcett title started in 1943, and its early covers are war-themed. Possibly Fawcett as a partner title for the aviation-themed Captain Midnight.

Toonopedia's article on the character is here. It mentions that the Fawcett title was cancelled in 1948 and then revived. The revival lasted 5 issues, and used photographic covers. I would guess the photographs were drawn from the serials' publicity materials. According to DC Indexes the first issue of the revival went on sale in 1950.

I remember her wearing dress trousers somewhere but not jeans. The cover of Marve Marvel#28 says she "rides high wide and handsome" but GCD's description of the story inside just says she fights someone named The Hen. That might be a Western villain, but it's a poor name for a villain. I believe that issue also featured the only time Uncle Marvel said Shazam and it actually worked.

This was the last issue of Mary's own title, but her solo feature continued to appear in The Marvel Family into 1951.

This issue has two Mary Marvel stories. In the first one, a two-parter, Mary fights the Hen, an elderly lady crook who is ruthless, strong, and skilled with a whip. This story was a surprise to me, as most of the Mary stories I've previously seen were fairly whimsical, whereas this is an action/adventure story. At the end of the tale the Hen is apparently killed, but in a way that suggests she was intended to return, as her body is not seen. According to the GCD she did return at least once, in Mary's story in The Marvel Family #34, where she teamed up with Georgia Sivana. In the second Mary story Uncle Marvel receives the Shazam powers for the day. They are depicted as sent by the "Shazam gods" rather than Shazam. Not  very much is done with the premise.

The filler items in the issue are a "Daffy Dill" four-pager (about a teenage girl), "Vita Min" (a little girl) and "Dizzy Daisy" (a young woman) half-pagers, and a "Benny Beaver and Fuzzy Bear" two-pager (funny animals). There are also some comics form ads, notably a beach-set "Adventures of "R.C." and Quickie" Royal Crown Cola one on the back cover, which has a similar storyline to the Charles Atlas ads and which is signed 'Creig Flessel'. In the early Golden Age Flessel drew "The Sandman" for DC, and many covers for Detective Comics, Adventure Comics and More Fun Comics.

In the text story a teenage girl employed at a small newspaper gets an emergency edition out after her boss and the reporter are beaten up and some of the equipment wrecked by thugs.

Interesting the popularity of Cap and Jr. didn't rub off on her. I've read her series there and in Wow failed because her stories were more childish than the other's (I think in the 40s to the 70s book)  but I suspect there weren't enough girl readers and boys didn't want to be caught buying or reading comics about girls. I remember Jr. hung out with fairies so Mary was hardly the only one in childish stories. The whip suggests an attempt to boost sales by bringing in crime/horror aspects, which would soon lead to things like this: 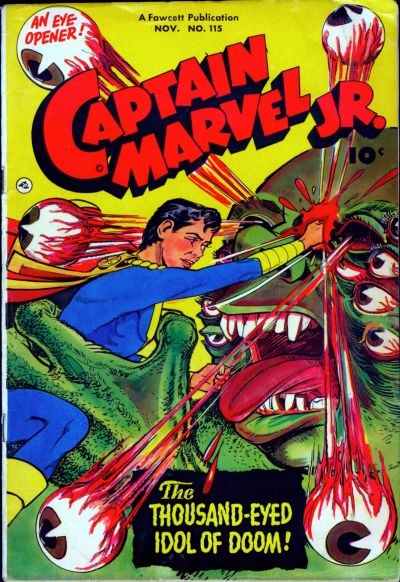 Maybe Mary would have lasted untiil Fawcett closed up if she'd fought guys like this.

One thing I disliked about the earlier stories was the idea Shazam was bossing around Zeus. A wizard should never reach the point where gods are afraid of him.

I knew Fawcett had tried horror in some late Marvel Family stories; but the others stories and covers I've seen weren't that gory!