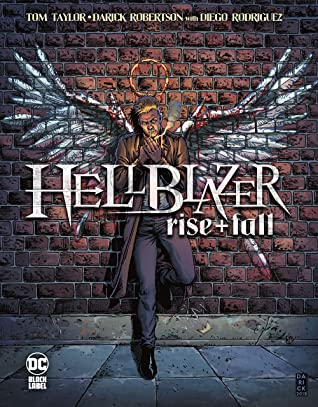 A return to classic John Constantine (with pitch-perfect Darick Robertson art), this is almost literally an origin story, beginning with Constantine's birth and his mother's death during childbirth. He says "I was born guilty," and that's just the beginning. Young John rebels against his father by doing the opposite of what he's told, which means going down to the river, smoking, and doing magic. A summoning performed with friends goes wrong, in a way a bit reminiscent of the famous Newcastle incident in which John lost two friends.

In the present, rich, famous people start falling from the sky while wearing angel wings. This is so Hellblazer that I almost couldn't believe it. Naturally there is a deep backstory behind it, which ties back into the failed childhood summoning. But first. Lucifer Morningstar shows up in John's apartment, and he wants his wings back. It's a wonderfully twisted tale, with the ever-resourceful Constantine outsmarting demons (as usual) and Lucifer a much more helpful ally than usual. The magician does not escape his guilt, but he manages to help his friends escape theirs--while also giving an unexpected gift to his fellow citizens.

The three issues collected here were originally in a magazine format, about 50 pages each and in a larger format than standard comics. In the e-comic form I read it in the screen shape was unusual, but it worked. The collection concludes with a variant cover gallery and a collection of Darick Robertson black and white sketches.

I loved this story. Between this and the Si Spurrier-written 12-part series for Black Label, I'm ready to believe in Hellblazer again.

I like the Si Spurrier series, too. I haven't read the second volume yet, though. Waiting for more of the Sandman Universe to get collected so I can read a bunch at once.