The Micronauts #53 & 54: Homage, Plagiarism and other Crimes against Humanity

The most striking element of issues 53 and 54 of volume 1 of The Micronauts is the old Star Trek cliché of an alien world where the inhabitants dress, talk and behave like Depression-era Chicago gangsters. In this case it is a prison world, called … ahem... Prisonworld, where the inmates remodelled their society based on broadcasts from 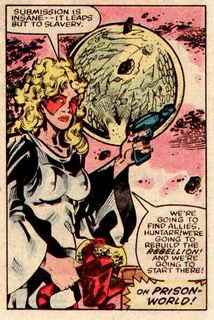 our world into the Microverse, when Karza’s regime fell at the end of the First Karza War.  It seems that everyone had had their personalities wiped by the harsh psychological experiments and tortures conducted on them, and so were a perfect blank slate for this kind of social makeover.

Admittedly, it’s all a bit weak as science fiction, and as derivative as it gets.  Still, writer Bill Mantlo has the good grace to begin the second issue of this two-parter with an acknowledgement to some of those that he’s ‘flattering by imitation’ here.  Not Star Trek, but a different set of bold 60s pioneers into the unknown:  Stan Lee and Jack Kirby, who had produced a Fantastic Four story set on another alien gangster world.  I’ve read a pretty convincing case that Kirby had used the set-up because by that stage of his relationship with Marvel, he was leery of gifting Marvel with more new ideas that they would use and profit from into perpetuity without recompensing him or acknowledging him properly.  Apparently Kirby worked in his basement with a TV on all the time and he would have been interested in Star Trek when it ran first, so would have in all likelihood seen the relevant episode of Star Trek before he created and drew the Fantastic Four story.

It is nice to see a shout out to Stan and Jack in the credits at this point, as it was they who created the ‘ball’ Mantlo has been running with all this time.  The idea of a Microverse of worlds, hidden away in the atoms of our world, was first used in a Marvel comic in an issue of Fantastic Four.

I’m still a bit surprised to see Mantlo using this set-up here, as it detracts somewhat from the exotic 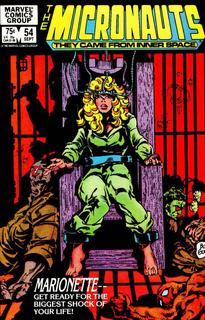 otherworldly feel that most Microverse worlds tend to have.  Up to now we had Earth culture only showing up in the Microverse in the form of ancient and mysterious links with Hindu and Egyptian societies, whereas the ‘broadcasts from 20th Century Earth’ idea is somewhat clichéd and detracts from what Mantlo has managed to do up to now in keeping the Microverse in its own rarefied universe.

The Micronauts choose to visit this prison world in order to persuade the inhabitants to join in the fight against Karza.  Their logic in choosing their first stop after Karza’s return is pretty sound. We are explicitly told that Prisonworld was for political prisoners, who in some way opposed Karza and then only the toughest could have survived on this world.  As it happens, the Micronauts arrive just when Karza’s forces are trying to regain their grip on this world, and much of the action of the two issues involves how our heroes team up with the prisoners to oust Karza’s forces from Prisonworld once-and-for-all.

I was struck by how starkly Mantlo keeps identifying the hallmarks of Karza’s tyrannical rule as implicitly and explicitly evil.  As well as the concept of imprisonment and torture of political prisoners, there is a great sequence in the second part where the Micronauts are put through a farcical trial where their guilt is a foregone conclusion, as is the death-sentence verdict.  The sequence where Mari is about to be fried in the electric chair is quite chilling.

It would seem things were more clear-cut in the 80s as to how you could tell the heroes from the villains.  In contrast, Marvel comics of the last 10 years or so have thrown up many instances of heroes taking pages out of Baron Karza’s book. 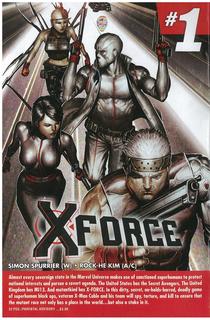 Civil War saw heroes locking people up just for their beliefs rather than their actions, and subjecting them to solitary confinement and other forms of torture.  As with Karza’s show trials, due process, the presumption of innocence and access to legal assistance was thrown out the window.  Even since then, we’ve had Wolverine running an extra-judicial death squad, whilst Captain America, that supposed paragon of virtue, consorts happily with torturers and assassins.

The moral compass in Marvel comic books has wobbled far out of whack since Mantlo used them to promote definite respect for due process and human rights.  A glaring, fairly recent example is this promotional piece for a version of X-Force.

Clearly, going just by the advertisement, torture and extra-judicial assassination are being presented as not just acceptable, but actually a selling point for the series.  I haven’t read it, and for all I know, the series was used cleverly to examine the immorality, and self-defeating nature of such Karza-esque tactics in the modern world.  Given that the series was presented by the company that went to such lengths to shut down any discussion of a Spider-man story that presented torture as something useful in the exact water-boarding terms that the likes of Rumsfeld and Cheney argued in its defence, I doubt it! It looks like this Micronauts run, as helmed by Mantlo, may have been cancelled or rebooted somewhat earlier than Mantlo expected.  These two issues are only 6 issues from the wind-up of the original epic run, but they feel like ordinary issues of any ongoing series where the creators feel they can tread water for a while rather than push the narrative forward, or even feel they have to tread water in order to stretch out the story they have to tell into an ongoing monthly series.  There is a rationale for starting their recruitment drive for their new rebellion at Prisonworld, but it doesn’t quite feel like the beginning of a pushback that will take only 6 more issues of the regular series to tell.

There are lots of clues in the letter columns that the creators felt they had much longer than a few issues to tell their story, maybe even years and years.  As we shall see, the next few issues don’t have quite the sense of urgency about them either, although the 4-issue mini-series that teamed our heroes with the X-Men and which takes place just before Mantlo’s last issue, does hurry things along,  rather catastrophically for one side of the struggle, just before Mantlo’s tie-up of the series.

All of which we’ll get to in later posts….

Given that the series was presented by the company that went to such lengths to shut down any discussion of a Spider-man story that presented torture as something useful in the exact water-boarding terms that the likes of Rumsfeld and Cheney argued in its defence, I doubt it!

I'm curious. Is this something that happened in the Civil War event that I have somehow forgotten? Or was it in another Spider-Man story?

Amazing Spider-Man #685.  Colin Smith wrote it all up rather well here.

Not only did Marvel pull out it's big guns to shut down any discussion of how their comics might be reflecting the world we live in, it looks like they made a point of erasing their tracks afterwards too.  There was some twitter conversation between Colin and Wacker that got erased shortly after their exchange, I noticed.

So comics are always relevant to real life and are, as Stan used to opine, pointed encapsulations of morality in an escapist format, except when they are not, apparently.  And they are not, when Marvel says they are not.

So Marvel's motto is now "Shoot them all and let God sort them out." It's actually a good thing kids aren't reading comics anymore. They'd grow up to be Saw.

I can't believe I haven't heard about this sequence before. If a Disney executive didn't know that it was a Marvel book I can see them calling the lawyers to sue Wacker and Slott!

You mean that if a cartoon or film had shown Spider-Man doing this?  You might be right.  It does the brand no favours.  Perhaps Marvel belatedly realised that this was horrible pro-torture propaganda?

(And isn't it strange that this is practically the only comic I can think of where a Mossad agent is there to egg on a superhero?  But that's another story.)

That no-one at Marvel saw that this was extremely dodgy tells us something about the times we are living in.  We've compromised on a lot since Mantlo's heyday.

I used to like Slott.  My contributions to the Initiative thread are full of admiration for his work. But I find I can't support him now.  Marvel's Spider-Man means nothing to me either.

What really gets me is that every time I take my kids to the park here, there's always a few other kids, boys and girls, running around with Spider-man branded gear.  Of all the heroes to go this route with?