How Many Versions Does One Man Need?

I'm going to paraphrase Jack Kirby from the '80s documentary "Masters of the Comic Book Art" (available on You Tube): "The way I understand it, the editorial cartoon came first. You add a couple of panels to that, and you've got a comic strip. Add a couple of pages to that, and you've got a comic book. What can we add to the comic book? That's something we may have to think about." I've got my answer: SIZE. "Size" as in omnibus editions and gallery editions and MONSTER-SIZE editions. I love those!

When I was a kid, I was aware of the Thomas/Kane "Jesus Christ - Superhero" version of Adam Warlock from his appearances in Hulk, but I hadn't read the series. Then, in 1982, I bought the six-issue Warlock Special Edition and it wasn't what I expected at all. It reprinted the Starlin version, of which I had been completely unaware of at the time. when I was in college, I picked up all of the original backissues. In 1992 I bought the six-issue Warlock reprint series, which was identical to Warlock Special Edition, but it was printed on different paper stock and I wanted to file it in the same box with the then-current new Warlock series. A couple of years later, I bought the two volumes of MMW Warlock, the first of which comprised the Thomas/Kane era, the second Starlin.

Then, in 2019, Marvel released what I considered at the time to be the ultimate Starlin/Captain Marvel/Warlock edition ("ultimate" in that I would never need to buy another): The Thanos Wars: Infinity Origin omnibus, reprinting all of Starlin's Captain Marvel and Warlock stories, plus The Death of Captain Marvel graphic novel in a single edition. Perfect!

But now Marvel has solicited the Warlock by Jim Starlin "Gallery Edition" for December release, and it's even bigger than the omnibus edition! But do I really need it at this point? Will I ever read it? I guess I will whenever I am in the mood to read just Warlock, but what if I want to read the whole "Thanos Saga" from Captain Marvel to Warlock to The Death of Captain Marvel? Won't I then want to read it in a consistent format? [NOTE: I'm not really wild about the title "That Thanos Wars: Infinity Origins" as opposed to a title which would emphasize the heroes, but...] So here's my dilemma..

I will never read the originals or the Special Edition or the 1992 series again. I would possibly read MMW Captain Marvel if reading from that POV (as I did for a discussion just last year), but probably not MMW Warlock. Whereas I would definitely read the Captain Marvel bits of the omnibus from a Thanos (or a Starlin) POV, what about if I were in the mood to read just Warlock? Or when I get to the Warlock issues of the omnibus? The gallery edition is bigger, after all.

I stopped buying floppies comprehensively in 2010, and don't buy many comics at all. So any time a post-2010 Marvel or DC omnibus comes along, I can buy it with a clear conscience. No dupes!

In the meantime, I'm also buying omnibuses of Big Two material I already have because it's what I dreamed of when I was 12: The comics I love, bound in durable format that I can put on a bookshelf. I'm not going to replace my entire collection with HCs, but sometimes it feels that way.

In the meantime, I struggle with the Omnibuses that repeat Archives and Masterworks material. I really prefer the Omnibuses, but how can I justify spending that kind of money on material I have in two or three other formats? (Answer: I lie to myself.)

Where I'm headed to now is buying Omnibuses when I've got a hole in my Masterworks collection, and those that are far ahead of the Masterworks. I figure I'll continue the Masterworks until they catch up, or I retire, whichever comes first.

It is annoying that, unlike other publishers, comics seem to publish high-end reprints after they've exhausted other, cheaper formats. As someone who always prefers the HC version with the most pages, it's tough to hold off on TPBs with what I want when they become available first, and gamble that there will be an HC down the road. Usually I fail, and end up buying both versions.

But here's a happy story, that I refer to in this week's This Week in Comics: I wanted to buy the Hellboy miniseries set in the '50s but held off. Then the trades came out, and I held off. They may have done individual HCs as well, but if they did, I held off. And now, finally, there's an omnibus collecting all three miniseries. O happy day!

WHEN AM I GOING TO GET MY JOHN BYRNE "SUPERMAN" OMNIBUS!?

Practically all of JB's major output (and some of his minor output) has been released in omnibus format. It's been available in a series of tpbs for years, but I don't want to put myself in the position of potentially duplicating collections when the inevitable (?) omnibus is eventually released. A JB "Superman" omnibus was solicited for July 2020 release but was cancelled due to COVID. Since then, three standard size hardcover collections have been released, but I'm still holding out for the omnibus.

I lied. Actually, I changed my mind at the last minute... and I'm glad I did. (It shipped today.) I was thinking this was the same "treasury" size-with-the-plastic-cover format of recent releases, but its actually bigger than that and hardcover. It does not include the MTU by Mantlo/Byrne which is not by Starlin and doesn't really move the story forward (other than to correct JPS's misunderstanding of the "expanding universe theory").

Okay, this one I'm really not buying. I already the originals, the "Baxter" reprints, the DC Classic Library Edition and the Ominibus. Unless... does it match the slip-cased Alan Moore editions (of which I'm still waiting for v3, BTW)? Those are things of rare beauty, indeed.

"...the slip-cased Alan Moore editions (of which I'm still waiting for v3, BTW)"

Speaking of alternate versions, the first volume of the Terry & the Pirates Master Collection is also scheduled to ship in March: "Reproduced from Milton Caniff's personal set of color syndicate tabloid proofs that were unavailable for previous books, this handsome hardcover (which kicks off a comprehensive 12-volume, 11" x 14" hardcover series) is the ultimate edition of Caniff's masterpiece." I'm sure it's gorgeous and all, but that's $1440.00 (!) for the set.

INTERSTITIAL ISSUES: I just thought of a few examples in which duplication is necessary, even desirable  (for the completist).

SWAMP THING: I am currently reading the Bronze Age Swamp Thing Omnibus, which includes #1-24 of the original series and #1-19 (plus the first annual) of the second series. What it doesn't contain are the interstitial appearances of Swamp Thing from The Brave & the Bold #122 & #176, Challengers of the Unknown #81-87 and DC Comics Presents #8, not to mention the script and unfinished pages for the unpublished v1 #25. For those one needs the second volume of the Bronze Age tpb.

Here's another one*: MOON KNIGHT.

*Actually, this is not a call for duplication, but it's similar.

Okay, I manage to give a pass to the Warlock Gallery Edition, then Marvel goes and solicits this! 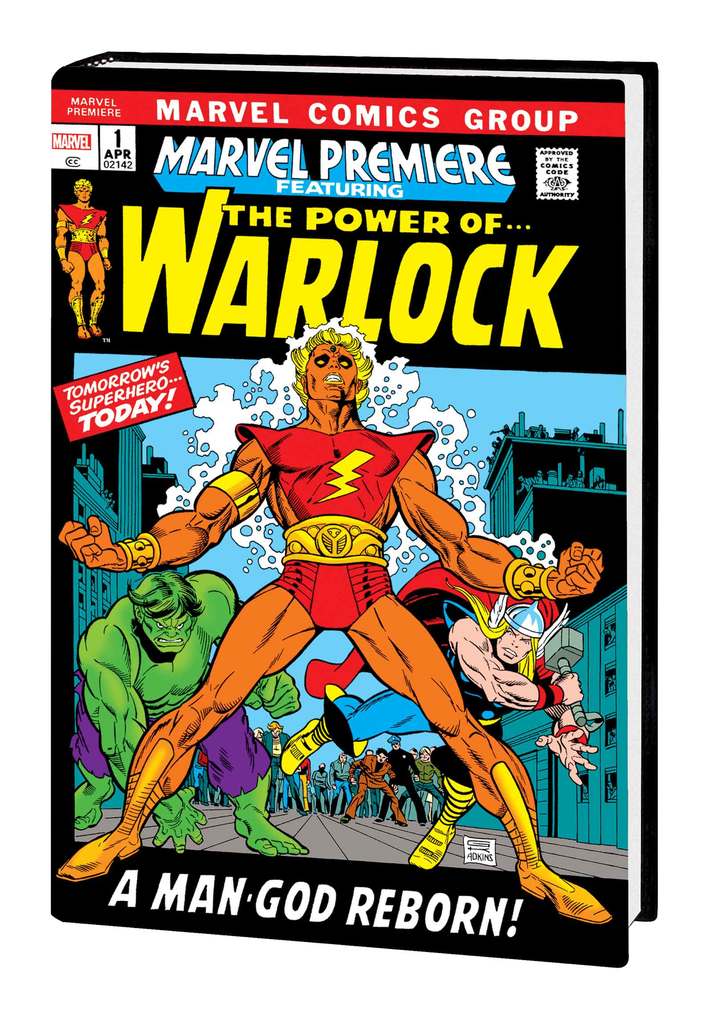 Warlock's story, from the "Old Testament" of Jack Kirby through the "Jesus Christ, Super-Hero" phase of Roy Thomas to  Jim Starlin's "cosmic" version is one of my favorite character arcs in comics, and soon it will be available in a single hardcover edition!? How am I supposed to pass that up? 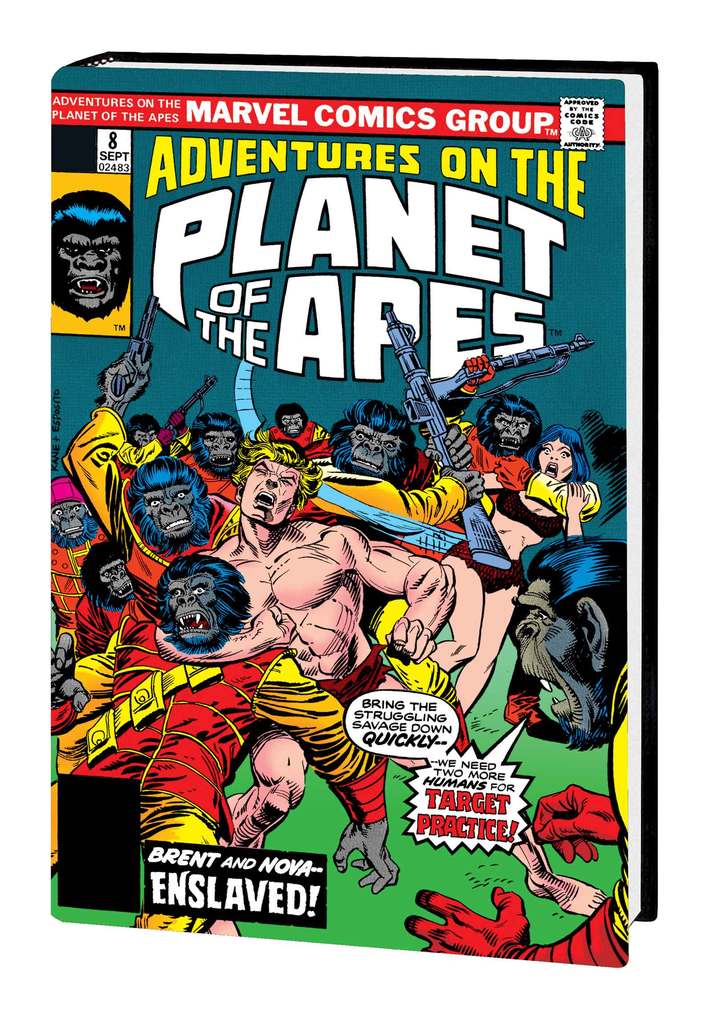 The simian sci-fi staple, in the mighty Marvel manner! Relive the classic films Planet of the Apes and Beneath the Planet of the Apes as Marvel’s 1970s color comic adaptations are collected in one action-packed volume! When a crew of astronauts crash-lands on a strange and desolate world, they discover a society of apes with heightened intelligence and speech! And here, a race of mute humans are their slaves! Can the mission’s leader, Taylor, fight his way free and hold onto his humanity? What is the shocking secret of this Planet of the Apes? And what unfathomable danger lies beneath the surface? Find out when a second spaceship makes its way to this uncanny world and another astronaut faces a battle for survival, with the fate of the entire planet at stake! Collecting ADVENTURES ON THE PLANET OF THE APES #1-11.

Yeah, I saw that, too. This is a reprint of two b&w serialized stories I already have in hardcover.

But it's in COLOR!

Once again, friends, it's time for the latest guidance from Marist College, which has inherited the…See More
21 minutes ago
0 Comments 0 Likes

PowerBook Pete, the Mad Mod replied to Emerkeith Davyjack's discussion All-purpose newspaper strips discussion
"Following are the Mutts comic strips from a couple of weeks ago."
3 hours ago

PowerBook Pete, the Mad Mod replied to Emerkeith Davyjack's discussion All-purpose newspaper strips discussion
"Maybe the word "comics" is a problem, and there are those who consistently refer to them…"
3 hours ago

PowerBook Pete, the Mad Mod replied to Emerkeith Davyjack's discussion All-purpose newspaper strips discussion
"So many still think all comics or animations are for kids after decades of proof otherwise."
3 hours ago

Richard Willis replied to Emerkeith Davyjack's discussion All-purpose newspaper strips discussion
"Jeff of Earth-J said: One of the themed "letters to the editor" columns appeared under…"
3 hours ago

Jeff of Earth-J replied to Jeff of Earth-J's discussion She-Hulk
"By the time of Marvel's 18th graphic novel in 1985, I had long since given up buying every…"
4 hours ago

ClarkKent_DC replied to The Baron's discussion 'Are Newspapers Dying?' Thread
"Parade is joining the parade of publications moving online."
4 hours ago

ClarkKent_DC replied to Emerkeith Davyjack's discussion All-purpose newspaper strips discussion
"Dan Piraro of Bizarro speaks to the issue on his blog: "Has Bizarro Been…"
4 hours ago

Richard Willis replied to Steve W's discussion A Cover a Day
"A movie based upon this would probably have been better than the other "Phantom Menace.""
4 hours ago

ClarkKent_DC replied to The Baron's discussion 'Are Newspapers Dying?' Thread
"We discuss this over in the thread "All-Purpose Newspaper Strips Discussion,"…"
4 hours ago