How much did the loss of the ads hurt comics?

One thing I have noticed in reading the issues from the 1970's into the 1980's is that the adds just aren't there today. The novelty adds, the back issue adds, the toys... just sort of faded away.  Anyone know how much of a hit this caused financially?

Now of course all you need is a camcorder with night vision and a filter.

Wikipedia has a page on the X-ray specs here. Don't click through if it'll break your heart to hear they weren't really X-ray specs.

...Clark has the main point - newsprint ain't gonna happen . How much would it save , anyway ?

And would those " New/Now Generation " readers we all say are needed be particularly impressed by newsprint printing and cruddy paper ?

CBs were printed that way because it was the same stock as Sunday newpaper comic sections , all printed at World Color Press - or whatever it was called - which shut down in 1991 ? How are Sunday sections printed now , then ? They are still on newsprint (Obviously , with " newspapers dying " , perhaps that is not the best example to look to !!!!!!!:-))

DC's Johnny DC titles and Archie's 32-pagers were printed on pulp paper - under a Joint Operational Agreement of some sort between Archie and DC , even sharing some of the (Paid , obviously) ads - until 2007 or so , and the second Gladstone comics printed two of their Disney titles on a better-level of pulp printing in the Double-Os too , as I have said here before .

How does Archie print their on-newsprint digests ?

Don , I recall seeing Grit a bit in Green Bay , WI , when I lived there in the 80s - I remember some " Dan Quayle is misunderstood by the liberal media " article , or something like that .

Reading/skimming this whole line - I think Sea Monkeys and the like were not the only type of ad to be found in Silver Age comic books , as far back as '66 when I started reading - Remember when the TV networks would advertise their Sat-AM lineup for the year , I guess in the (actually coming out in) August issues ?

For years , CB had the center spread , that month , every year .

IIRC I have brought up here before an article about " the new comeback of comic books " about the initial comic shop boom that appeared in the New York Sunday News' magazine supplement in 1982 or so , it was very interesting and possibly started me t be more interested in comics again then - I don't know how one would ever find the article , the Daily News isn't a very widely saved by libraries paper I would think - It quoted some long-timer at DC as saying , " really , looking back , the mistake  we made was that , when we couldn't keep the price at 10c for 48 pages anymore , we kept cutting down and cutting corners more & more , and even when we had to raise the prices , we did it by such pissant steps " - Yes , I fondly remember buying many many comic books for 20c each myself , but that was the last stages of a period of prices being kept artificially low which couldn't last - and by the late 70s , as you might remember , it was driving comic books off the store shelves ! Someone here before agreed with me on this , saying IIRC " if prices had gone up more logically , FANTASTIC FOUR #1 would've been a 48-pager for 50c " !!!!! If comic books had stayed at 48 pages , would the anthology title have remained more the mainstream ?

Modern comics have advertised such decidedly adult products as cars , and joining the U.S. military - Perhaps they can be seen at least in part as aiming at teenagers , not yet old enough to do these things but to  plant the idea in their minds for the (their) future .

Comic book companies can give you a kind of tie-in with The Product that you can't really get from Esquire , or Essence , or Time - Superman holding up Palisades Amusement Prk , or , from 2008 or so I recall these ads for Crest?? toothpaste showing a Moden Young Male using Crest in preperation fo a big date out , and getting a fabulous kiss from his girlie at the end of the night - Which were printed with the line " Crest toothpaste  Salutes DC Comics For 75 Years (70??) Of The herro Getting The Girl ! " , printed with an art repro of Superman clincing with lois , or such .

It seems this month or so's immediately newest new DCU titles have dropped all interior paid ads?? - Perhaps as a " to promote the new DCU " move for its first months ?

I think about anthologies a lot, as I grew up with them. I actually never followed any British weeklies other than my sister's Tammys, but I bought a lot of local comics with DC contents, and they ran all kinds of things behind the cover features. Coming into the 80s they did that less.

There's a distinction between mixed-genre and single-genre anthologies. Many early US anthologies, including the first DC titles, were mixed genre anthologies. The publishers had moved away from doing these by the 50s. The longest survivors were arguably Action Comics, Detective Comics and World's Finest Comics, as they didn't go all-superhero until the Silver Age.(1)

Detective Comics started as a single-genre anthology. Whether it ceased to be one when "Crimson Avenger" and "Batman" started depends how you look at it, as they were about crimefighting. Jungle Comics is another early example. (It included "Terry Thunder", which for part of its run was desert-set, but that's still exotic-places-adventure. "Tabu" and "Fantomah" were jungle/superhero.)

The British anthologies I knew as a kid varied. There were all-zany-humour ones for little kids. Tammy carried regular features, serials, and serial features that went on hiatus for periods.(2) (I believe a lot of 2000 A.D. features have been published like this.) The features and serial features included supernatural/horror stories, sports stories, school stories, pony stories, ballet stories and historicals, but almost all the title's contents starred school-age girls. So in its case, too, whether the title was mixed-genre or single-genre depends on how you look at it.

(2) The title's mainstays included non-serial comedic features, a horror anthology series, and "No Tears for Molly"/"Molly Mills", about a maid in a manor house in the 20s. I think it usually told short serial stories.

On the newsprint versus modern paper, I'm not sure about the cost but then it's hard for anyone on the outside of an industry to know the cost inside an industry.  I do know that a lot depends on the artist, these two pages show that a good artist if skilled enough can pack a lot into the page, but I think that the first shows a bit more economy.  But I'm not completely sure that it matters so long as the story works through the flow of the pictures.  On the other hand .35 cents (or 1.22 in todays money after adjusting) is a lot better than 2.99 and the current marvel stuff goes 3.99 and up.  I certainly can't afford that. 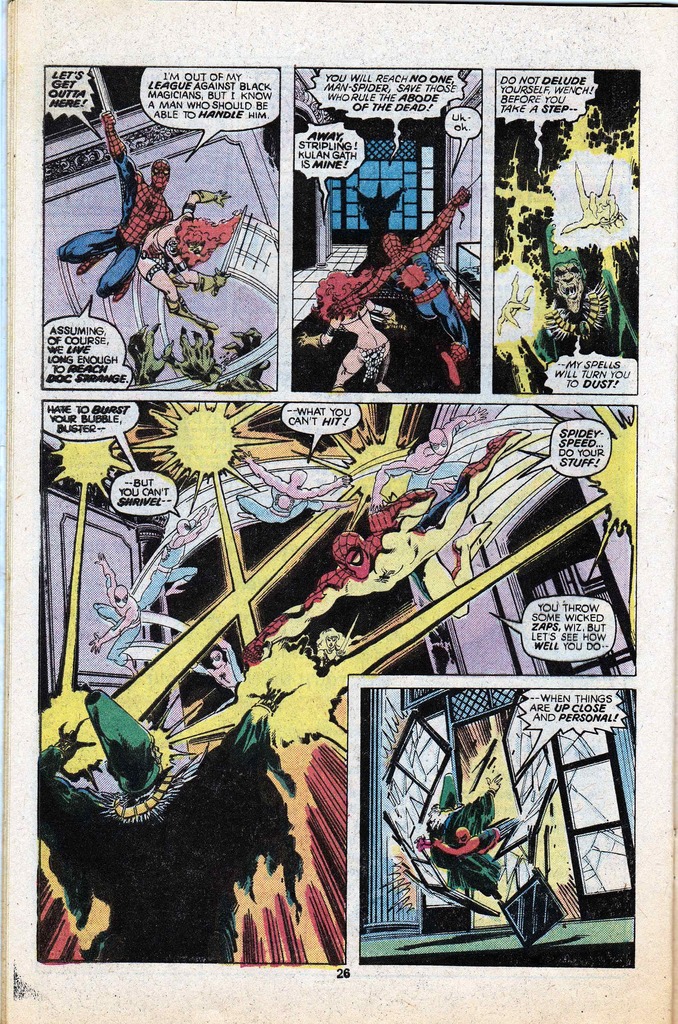 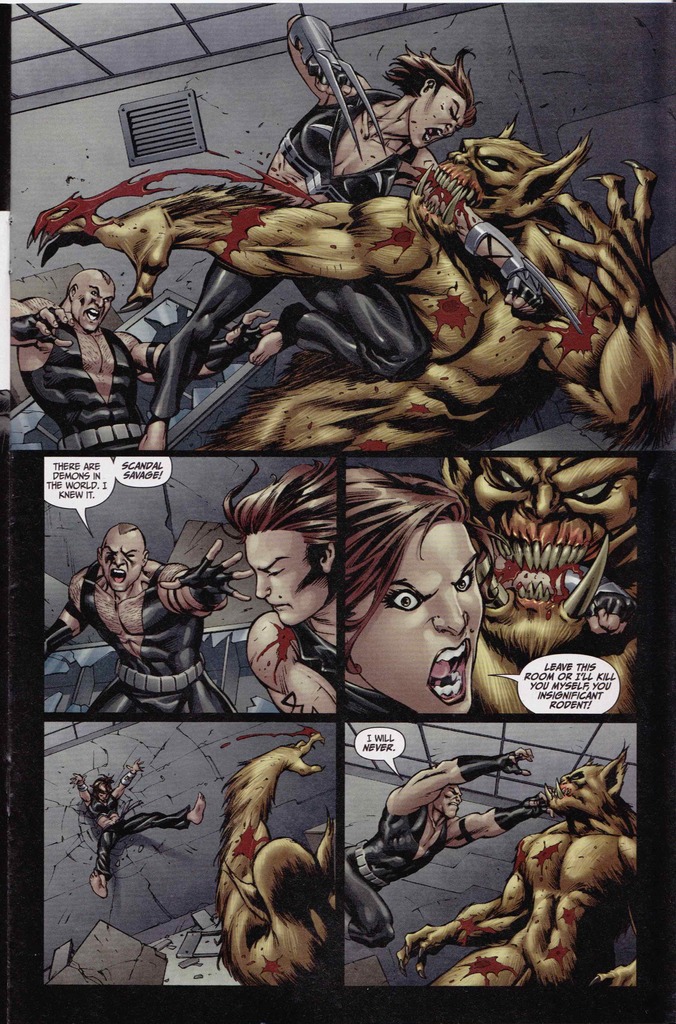 Interesting how both are four smaller panels with one larger one but they're so completely different. Especially noticeable is the lack of white around the page and between the panels, as if they now think every bit of the page must be colored in.

I think that was simply the feel of Secret Six, it was a very dark comic.  As I noted the differences could just be in the artist themselves.

Interesting how both are four smaller panels with one larger one but they're so completely different. Especially noticeable is the lack of white around the page and between the panels, as if they now think every bit of the page must be colored in.

Not only would you have to beat the bushes to find a company that would print on newsprint, the lack of competition in the printing would probably drive up the costs. I wouldn't be surprised if the shrinking Sunday comics sections in the newspapers are due to the costs of printing them having become too high. Also, today's comic fans expect the slick paper and the complex colors aren't possible on newsprint. That ship has sailed.

I don't know, after all as has been pointed out vinyl records sell.  I like to think that when it comes down to it that some people will choose a better story over flashy print.  There's always a line of thought that says "people won't buy that" until someone comes along and people start buying it.  People wouldn't pay for tv until they did.  If there were a choice between a 3.99 100 or 250 page comic on newsprint and a 32 page 3.99 comic on modern paper I think some would at least take a look at the newsprint.

Are newsprint comics the equivalent of a  black and white tv?  Probably, but if  (or more probably when) regular comics hit the 8 to 10 dollar range I think they'll be looking for just about anyway they can to make money out of them.  In the issue from marvel team up that I posted the scan from there were also adds for posters, I remember adds for belt buckles and all sorts of things, if anything like that could forestall the next price increase I'd be for it.

Digital delivery is essentially free, digital copies have no printing costs, and they are easy to store. That seems to me so ideal I don't understand hankering after anything else.

You don't actually own the physical comic.  It's an electronic ghost, an illusion made up of electronically generated photons.  Also if there is a power failure you can't read a tablet by candlelight.

Printers will get better and better, because everything does, and sooner or later it'll be practical to print them ourselves or get a shop to do it. There will be a cost, but we'll only have to pay to have the ones we want to keep in printed form printed.

And do you think that these would be stocked at newsstand accounts ?

There are far , far , fewer venues for " real " magazines then there used to be , too - Where would these be stocked and how much of a profit would the distributor and shop make from them to get them to sell them ?