We're planning to travel to Cincinnati for a wedding about a month from now, but there's been a hiccup: the day before the bridal shower, the groom came down with a breakthrough case of COVID.

The wedding is still on. Both the bride and groom were vaccinated, and the bride is quarantining in her future mother-in-law's guest room.

Oh, yikes! Good luck to them.

We've got similar tenuous plans. We were planning to go to New Orleans in late October. Booked our flights, arranged to stay with friends. Their house seemed to make it through Ida OK, and they got their power back a week or so ago. But now it turns out there's black mold on one of the walls, on both the top and bottom floors. So their house will be uninhabitable for a while. We're trying to decide whether to keep our plans and book an AirBnB (which would allow us to see our friends, who'll likely be in an Airbnb elsewhere in the city for a bit), or hold off, get a refund from the one flight I was able to make refundable (Spirit Airlines didn't allow it), and wait until the city is back on its feet. I've got mixed feelings -- it's a tourist economy, so our visit would be part of helping them get back on their feet. And it's still a month away. But... it still might be too soon.

We'll figure it out in the next couple of days, I think.

I shaved my beard and now my mask don't fit!

A veteran of my Army unit got his second Pfizer shot on February 1, and recently came down with a ten-day bout of COVID. The shots probably saved his life. They seem to think now that if your are six months away from your second shot you are more likely to have a breakthrough case. I got my booster shot today and urge everyone to get theirs as soon as they are eligible. The Moderna and J&J vaccines will most likely be approved for boosters as soon as they receive and review the data from those companies.

A friend of ours got a breakthrough case, even though he's been vaccinated. We're afraid because he hits all of the demographics that make COVID really dangerous -- male, heavy-set, diabetic, and Black -- but we're hoping that his previously being vaccinated will keep things from being too bad.

Some of you may know that I dabble in being a background extra in movies and TV shows (like Wonder Woman 1984). The last time I got to do it was almost a year and a half ago, in Richmond, in March 2020.

Things on the film and TV production front are picking up again. I got word of a project in Baltimore, and signed up for filming on Friday. The new rule: Nobody goes on set without two negative COVID tests.

They're paying four hours' wages each time for taking the test, and said they intend to compensate me somehow for Friday filming being canceled. Which is nice.

I got a message from the production; they're going to give me the full day's wages for that day that got canceled.

There are plenty of memes on the Internet pointing out that if they aren't conducting trials and doing peer-reviewed studies, they're just fishing for stuff that tells them what they want to hear.

"The ones on TV (that aren't obviously nuts) say they are doing 'research'."

The simple fact of the matter is, if you're not a scientist, you're neither capable of nor qualified to do actual research. What they're doing is "pretend research." The good news is, non-scientists don't have to do their own research, but rather just sit back and let the real scientists do the research for them.

Are "go back to the office" date has been pushed back again. It was supposed to have been November 2nd. Now they aren't even giving us a return date. Just a "sometime in 2022...we think". Which makes sense, considering how many times it has been moved.

On a lighter note, I have some friends trying to rent out a movie theater, so we can all watch Dune. I'm not a a fan of that series at all, so I gave them a very non-committal "maybe"

I don’t remember where I heard it, but some comedian (I think) pointed out that we have the CDC, a medical research facility that is the envy of the world. And he wasn’t going to match his Google skills against that.

As for “that situation” I continue to work from home, which is really the only way to work. (At least in my field.) I really, really, really don’t want to go back to the office. Ever.

Beanotown is menaced by an asteroid the size of Beanotown. 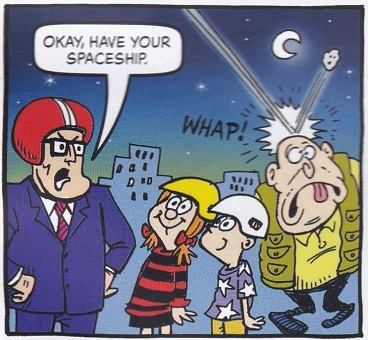 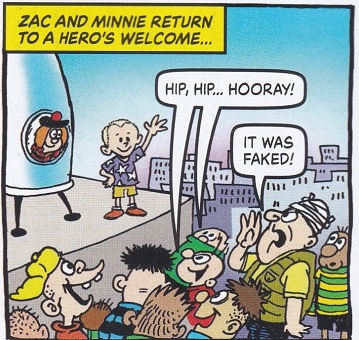 Two of the kids persuade the Mayor of Beanotown to provide them with a spaceship to fend off the asteroid and accompanying meteors.  They succeed.

I leave it to you to decide whether there's anything in these panels that might have any relevance to "that situation".

Jeff of Earth-J replied to The Baron's discussion HISTORY OF THE MARVEL UNIVERSE (SPOILERIFFIC!)
"Over in another discussion, I posted the thoughts of Mike Gold apropos the origin of Jon Sable…"
22 minutes ago

Jeff of Earth-J replied to The Baron's discussion How Old Would Comics Characters Be If They Aged Normally? (And What Would They Be Doing Now?)
"Back in 1992, Mikes Gold and Grell (editor and writer/artist) put out the Green Arrow origin series…"
26 minutes ago

The Baron replied to Randy Jackson's discussion Misheard lyrics you prefer to the originak
"It's tricky, because there's lyrics that I've mis-heard, but none that I could say…"
51 minutes ago

Jeff of Earth-J replied to Randy Jackson's discussion Misheard lyrics you prefer to the originak
"I misheard the lyrics of "Yesterday" but only slightly. The actual lyrics are... I said…"
1 hour ago

JD DeLuzio replied to Steve W's discussion A Cover a Day
"Gothic + kids, applied to the Challengers:"
2 hours ago

Fraser Sherman replied to The Baron's discussion HISTORY OF THE MARVEL UNIVERSE (SPOILERIFFIC!)
"I meant that it's never really shown that anyone outside the FF thought of him that way."
3 hours ago

Doctor Hmmm? replied to Cavaliere (moderator emeritus)'s discussion What are you watching right now?
"I started watching this last night. It took me back to being ... I dunno, 13 or 14 and being at a…"
10 hours ago

Jeff of Earth-J replied to The Baron's discussion How Old Would Comics Characters Be If They Aged Normally? (And What Would They Be Doing Now?)
""I don't if it's ever been addressed how many times Ragnarok has happened, or how…"
11 hours ago

Jeff of Earth-J replied to The Baron's discussion HISTORY OF THE MARVEL UNIVERSE (SPOILERIFFIC!)
"I agree with Rob."
11 hours ago

Lee Houston, Junior replied to Steve W's discussion A Cover a Day
"In the long run, even the "Big 2" couldn't contain Neal Adams... (Image courtesy of…"
12 hours ago