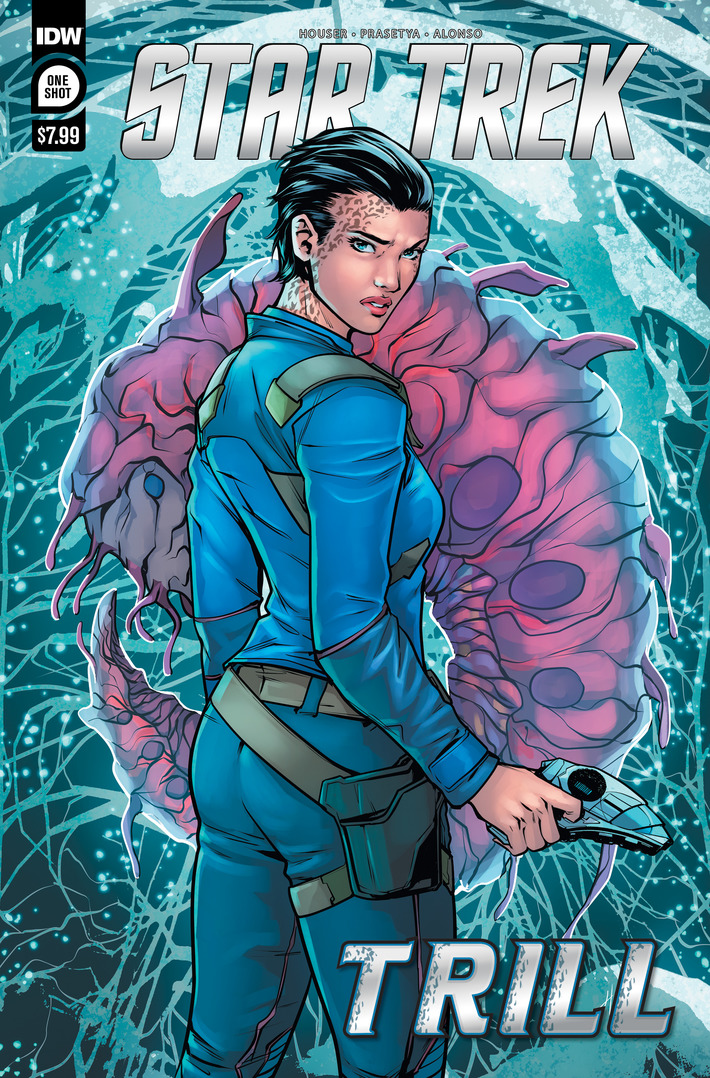 Someone is following Vanah, a research student and ex-applicant to the Trill Symbiont Initiate Program, after a life-changing event on a joint Trill-Federation science expedition. Delve into the world of the Trill in this suspenseful tale of tradition, independence, and survival. Continue the never-before-seen journey set between seasons two and three of the Paramount+ hit series Star Trek: Picard! Following an unsettling discovery on the planet Jenjor VI, Picard and Seven band together to save the native population and the Stargazer crew. The hit Paramount+ animated series makes its comics debut with Eisner-winning comics writer Ryan North (The Unbeatable Squirrel Girl) at the helm! Soon after leading her crew on a planetary expedition aimed at building bridges and advancing Federation technology, Captain Freeman begins to suspect that the planet and its people are not all what they seem… Meanwhile, the crew in the lower decks take to the holodeck, enjoying some much-needed recreational time—until a bloodthirsty visitor decides to join in on their games. 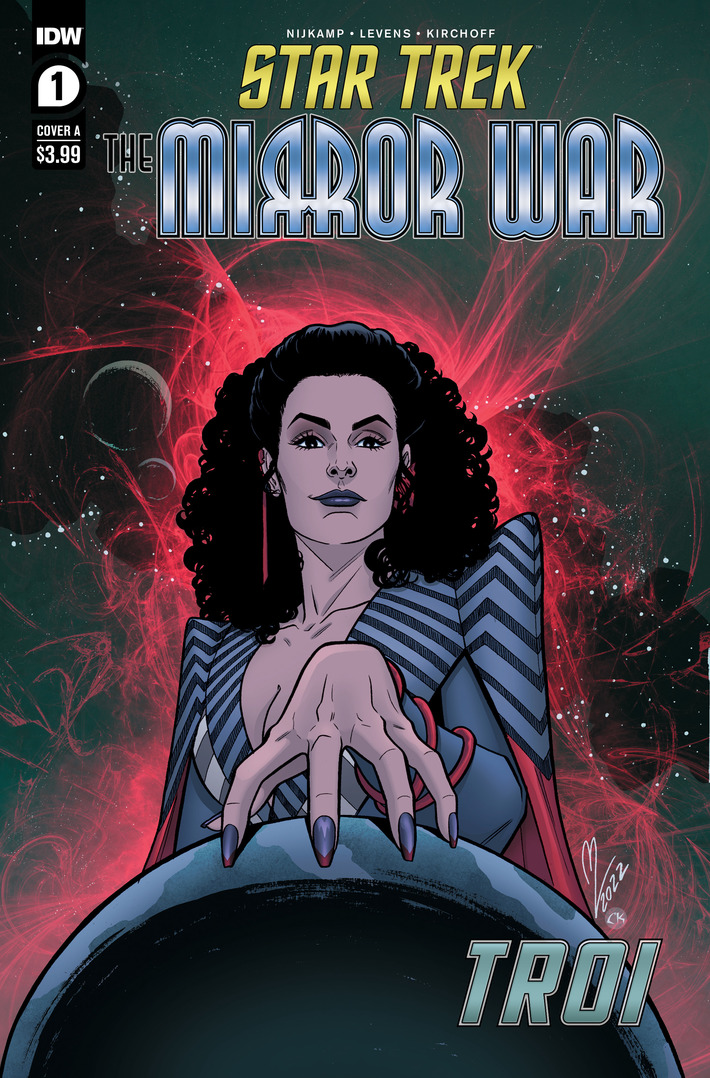 The spotlight turns to Deanna Troi in this one-shot set in the Mirror Universe of The Next Generation. Expand upon the world of The Mirror War! At the turn of a new dawn for the Terran Empire, having achieved victory over the Cardassian-Klingon Armada, Deanna Troi reflects on just how far her ambition has driven her on her calculating quest to seek power and escape among the stars. As the TMNT continue to train under the tutelage of the Shredder in Northampton, the techniques they are learning take a bizarrely arcane turn. Will Michelangelo, Donatello, Raphael, Leonardo, and Jennika learn how to master and control the dark ninja arts…or will they be consumed by them? One thing’s for certain: if they are to have any chance at success, they will need to seek out a light from the past to help guide their way. 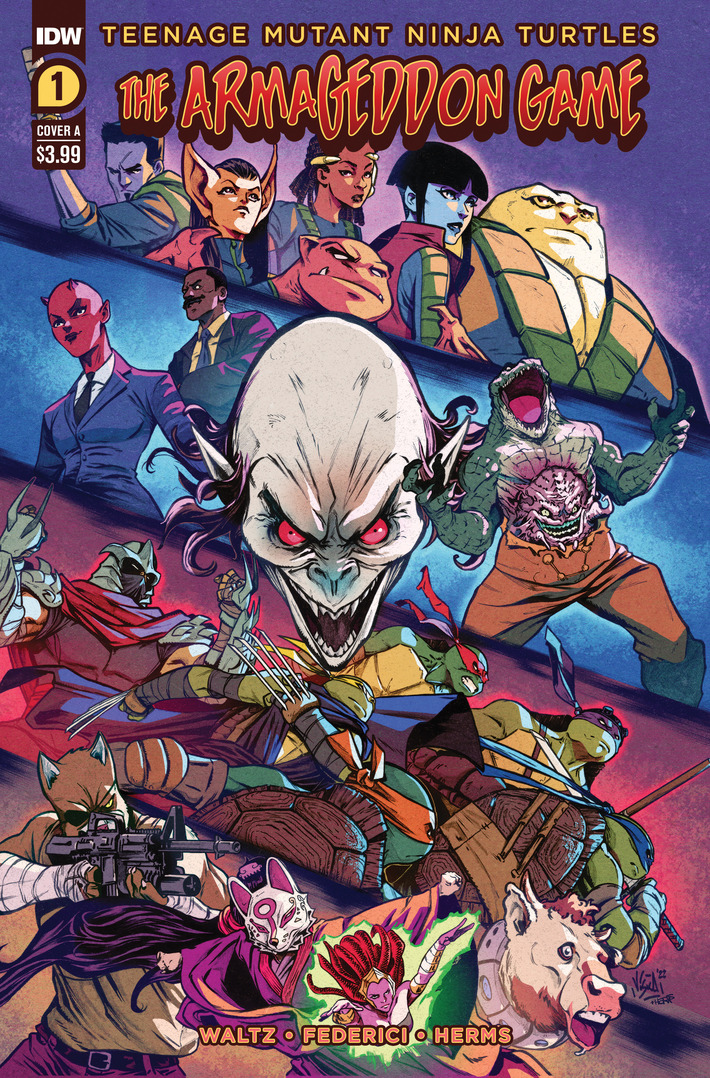 THE ARMAGEDDON GAME HAS BEGUN! Under the leadership of the Shredder, the TMNT begin a dangerous quest to seek out allies against Rat King’s trio of terror: LeatherKrang, Baxter Stockman, and Madame Null. It’s a mission that will see the Turtles spread out across New York City…and across multiple dimensions! But they better hurry, because their enemies are already on the march, and things are not looking good for Mutant Town while most of our heroes are away. Desperate measures, false flag attacks, mysterious new villains, and unexpected alliances… It all starts here in the premiere issue of the biggest TMNT event of the year!

Written by longtime TMNT scribe Tom Waltz (The Last Ronin) and illustrated by artist Vincenzo Federici (Jennifer Blood, Red Sonja), the time has come at last to find out who is playing…and who is being played! In 1987, the world at large was introduced to the TMNT by way of a catchy theme song and an action-packed cartoon. The cartoon’s aesthetic returns in Teenage Mutant Ninja Turtles: Saturday Morning Adventures, featuring an all-new set of standalone stories! In this issue, after an unexpected power surge, the Heroes in a Half Shell find themselves trapped in a training simulator, fighting to free themselves from the digital clutches of some of their most fearsome foes! Get ready for “VR in Deep Trouble!” (And try not to worry if that theme song is already stuck in your head!) 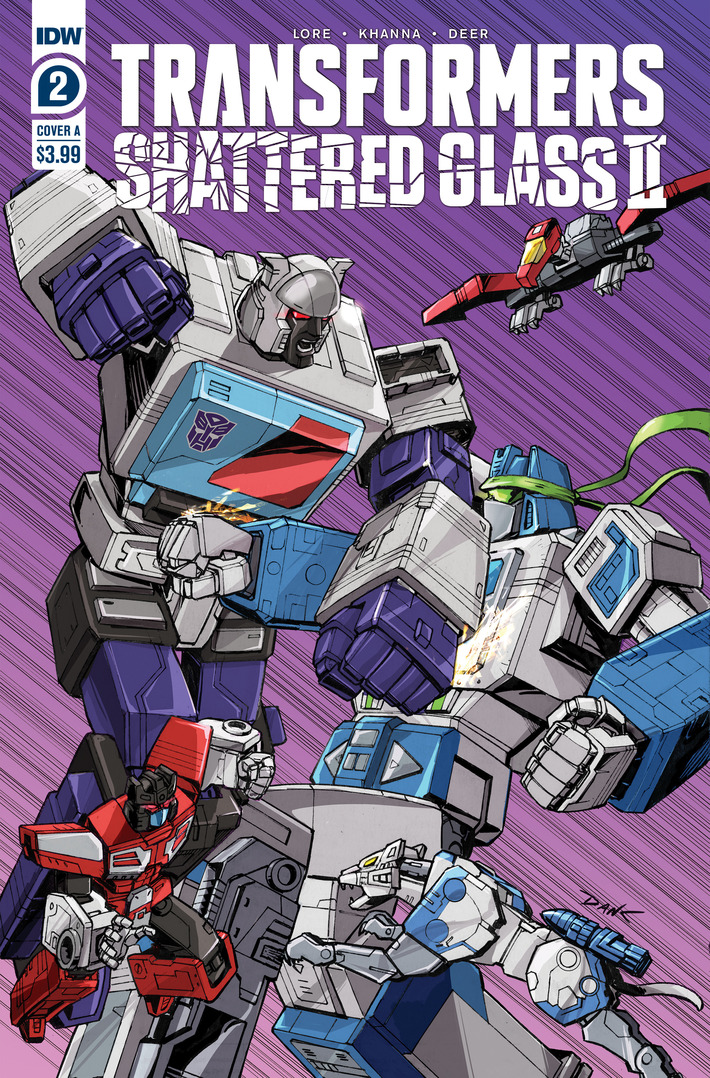 Finally! An issue dedicated to everyone’s (Blaster’s) favorite Autobot: Blaster! And he’s doing what he does best: being a star…kind of. Slicer recruits Blaster to infiltrate Decepticon Radio, but Blaster will have to stop being the star of his own one-bot show in order to get back in the good graces of the Autobots. 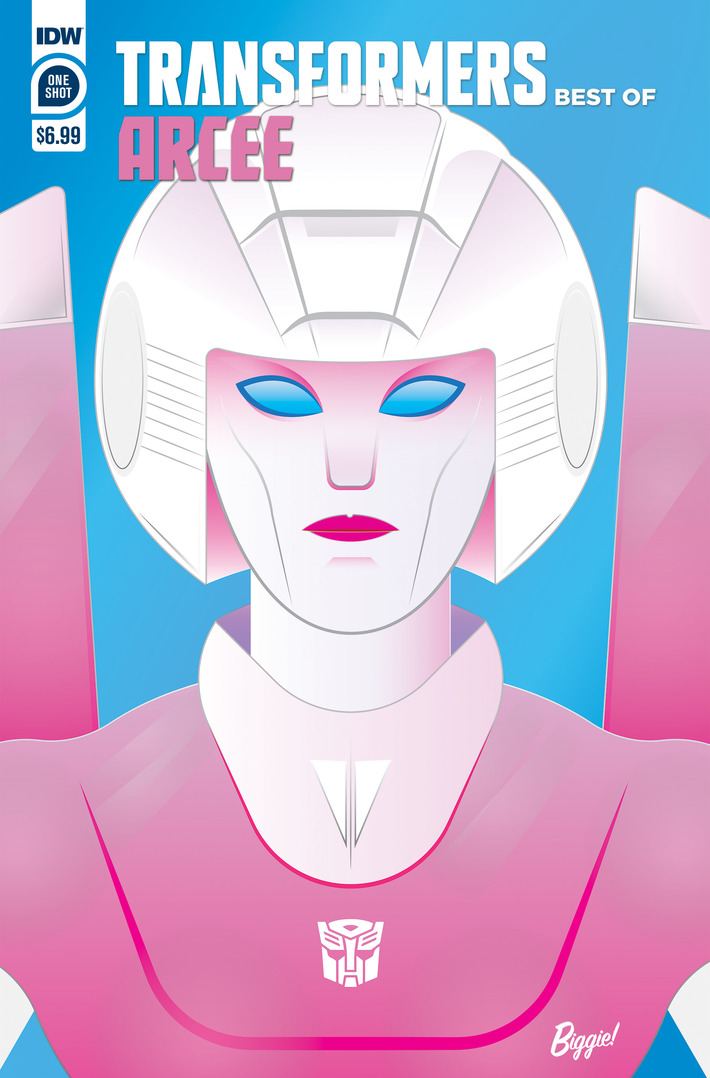 Is there anything Arcee can’t do? Anything she hasn’t been? With a life as long as hers, from her days as a barbarian with her brother to guiding heroes like Optimus Prime, Sideswipe, and Rodimus Prime to enjoying quality time with her loved ones—well, as much quality time as anyone can get when things are falling apart around them—Arcee’s seen and done it all. Relive some of the greatest moments from throughout the storied history of the Autobot legend! Collects Transformers: Combiner Hunters, Transformers (2012) #55, Optimus Prime #9, Transformers (2019) #18, and more! 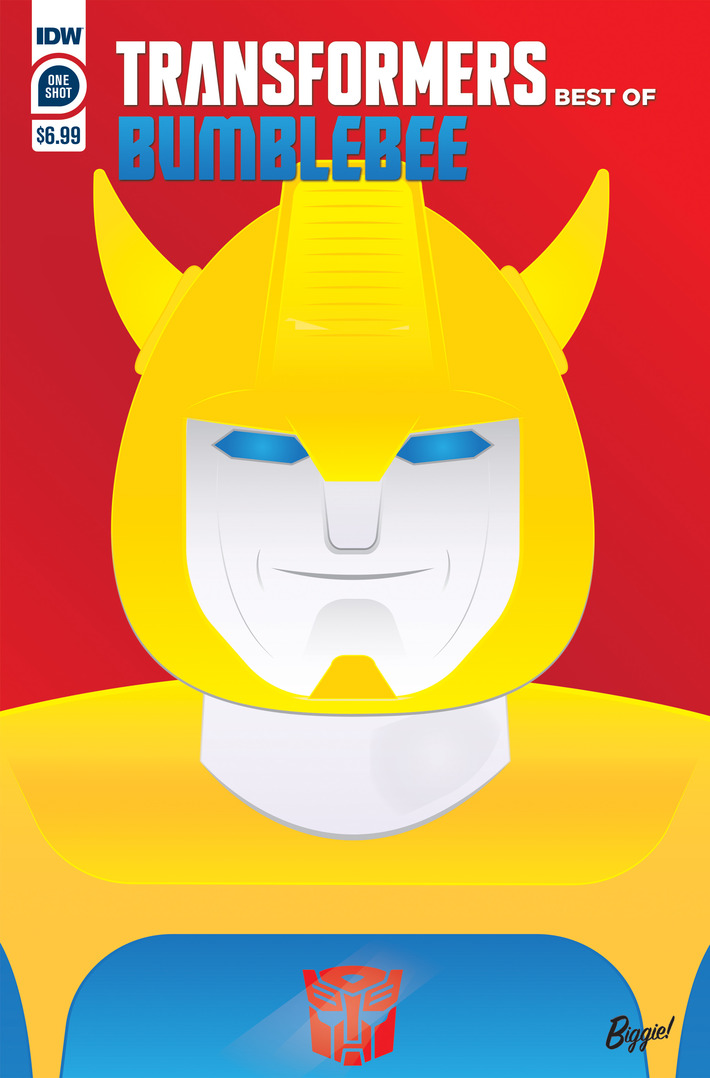 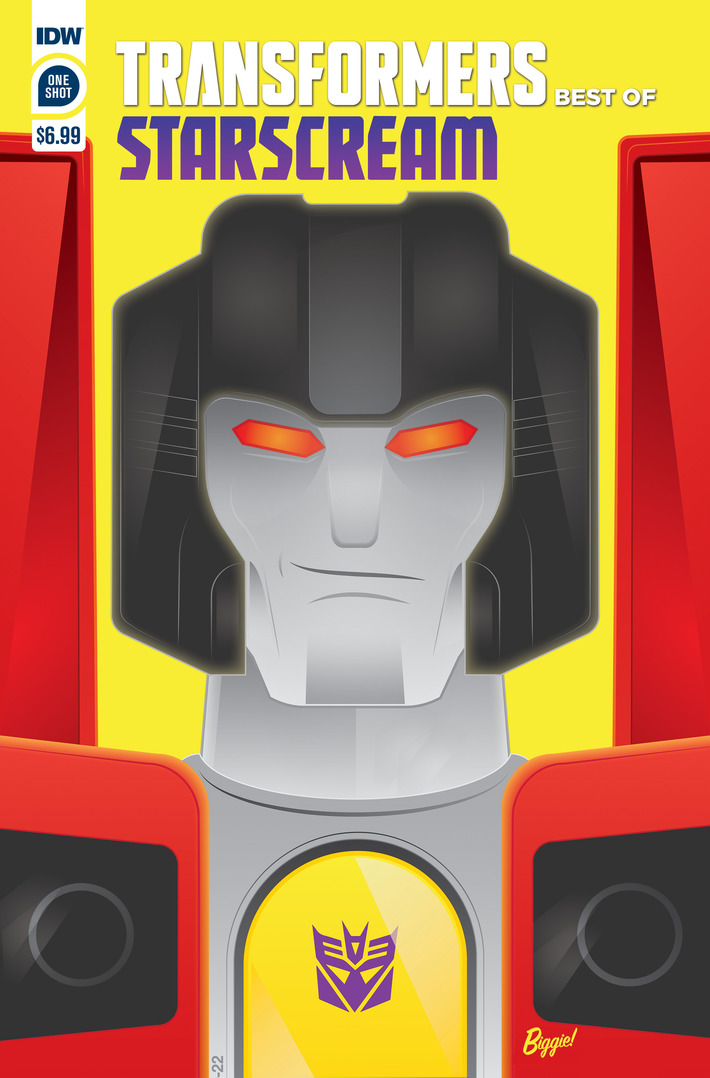 Watch your back! This duplicitous Decepticon air commander’s coming for the throne! But will the scheming Seeker ever achieve his goal of ultimate power? And what of the rumors that he’s actually got a kind Spark? Don’t believe what you hear…unless Starscream’s the one telling you!Best of Starscream collects The Transformers: Infiltration #6, “Three Monologues” from Transformers: Robots in Disguise #20, “Choose Me” from The Transformers Holiday Special, “Your First Mistake” from Transformers: Till All Are One #12, Transformers: Shattered Glass #3, and more! 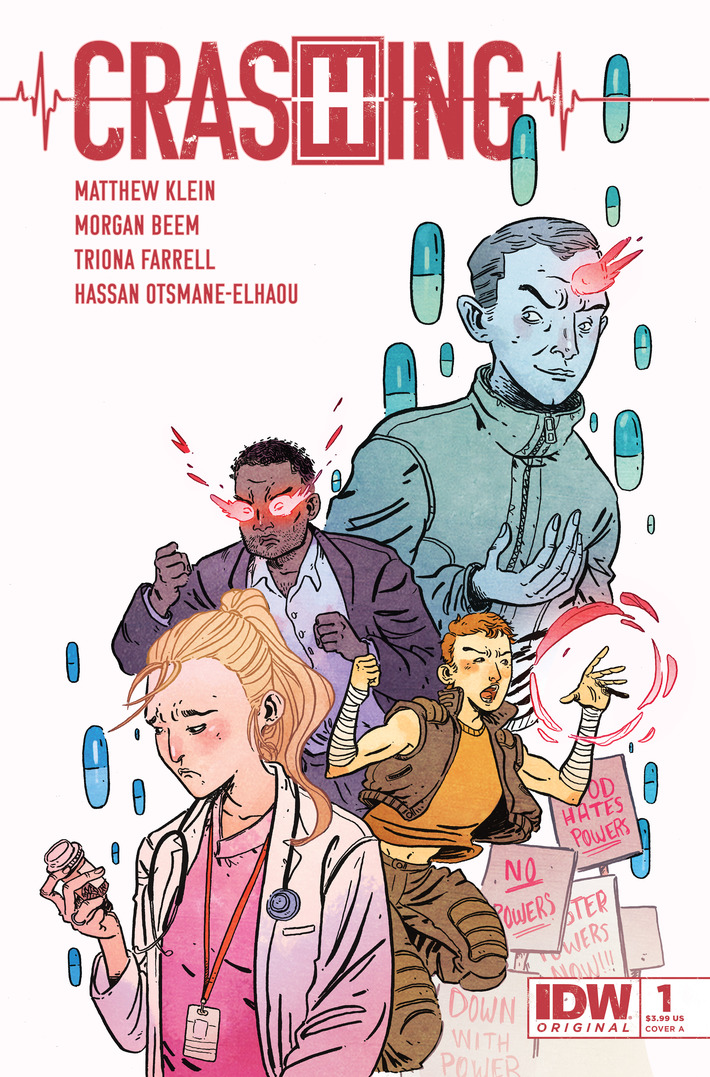 Rose Osler is a specialist. Her focus? Patients with Powers…at a hospital with a No Powered Patients policy. When a battle between Boston’s protectors and destroyers erupts, Rose is trapped between saving the city’s beloved hero by day and greatest villain at night. Except Rose could become a casualty when she’s forced to risk her recovery. As Rose pushes past her limits to save everyone else, will she be able to save herself? Our ragtag crew of firefighting inmates may have found what they were looking for, but along with it, they discovered the threat of something far more dangerous than the blaze around them. The trouble is just beginning in Dark Spaces: Wildfire #3.

Secrets are revealed! Miranda discovers the truth of her past and confronts her supposed guardian, Viktra. Will she have the courage to set herself free? What other memories will come flooding back to her? Will Viktra and Elise finally bury the hatchet? Or will they just bury each other? Stephen Graham Jones—New York Times bestselling author of The Only Good Indians and My Heart is a Chainsaw—makes his ongoing comics debut with Earthdivers!

The year is 2112, and it’s the apocalypse exactly as expected: rivers receding, oceans rising, civilization crumbling. Humanity has given up hope, except for a group of Indigenous outcasts who have discovered a time travel portal in a cave in the desert and figured out where everything took a turn for the worst: America.

Convinced that the only way to save the world is to rewrite its past, they send one of their own—a reluctant linguist named Tad—on a bloody, one-way mission to 1492 to kill Christopher Columbus before he reaches the so-called New World. But there are steep costs to disrupting the timeline, and taking down an icon isn’t an easy task for an academic with no tactical training and only a wavering moral compass to guide him. As the horror of the task ahead unfolds and Tad’s commitment is tested, his actions could trigger a devastating new fate for his friends and the future.

Join Stephen Graham Jones and artist Davide Gianfelice for Earthdivers #1, the beginning of an unforgettable ongoing sci-fi slasher spanning centuries of America's colonial past to explore the staggering forces of history and the individual choices we make to survive it. All-In, Part 3! The final G.I. Joe: A Real American Hero story arc at IDW Publishing continues! Using a brand-new casino on Cobra Island as a front, Cobra has been busy behind the scenes resurrecting dangerous villains and heroes alike, all in the hope of creating the deadliest Cobra army ever! It’ll be up to the warriors of G.I. Joe to foil their archenemy’s evil machinations before it’s too late. The game for the fate of the world is barreling to a calamitous conclusion, and it’s time for every single player to go…ALL-IN! New and classic heroes and villains will fill the pages (including some shocking appearances!) as the fan-favorite creative team of Living Legend Larry Hama and SL Gallant continue the final treacherous march to issue #300! 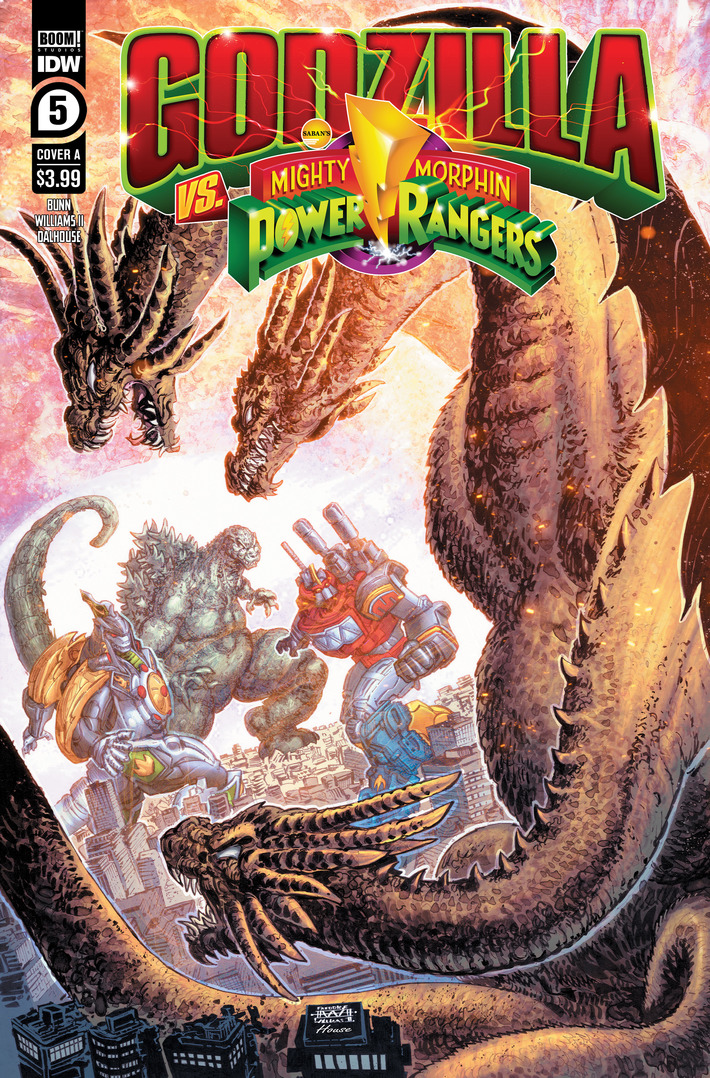 Godzilla and the Mighty Morphin Power Rangers have faced a host of terrible foes. Now, though, they face their greatest challenge—the mighty King Ghidorah! Can the “teenagers with attitude” and the King of the Monsters put aside their differences long enough to survive an attack from the three-headed tyrant? Find out in the bombastic conclusion to the most colossal crossover event of the year! 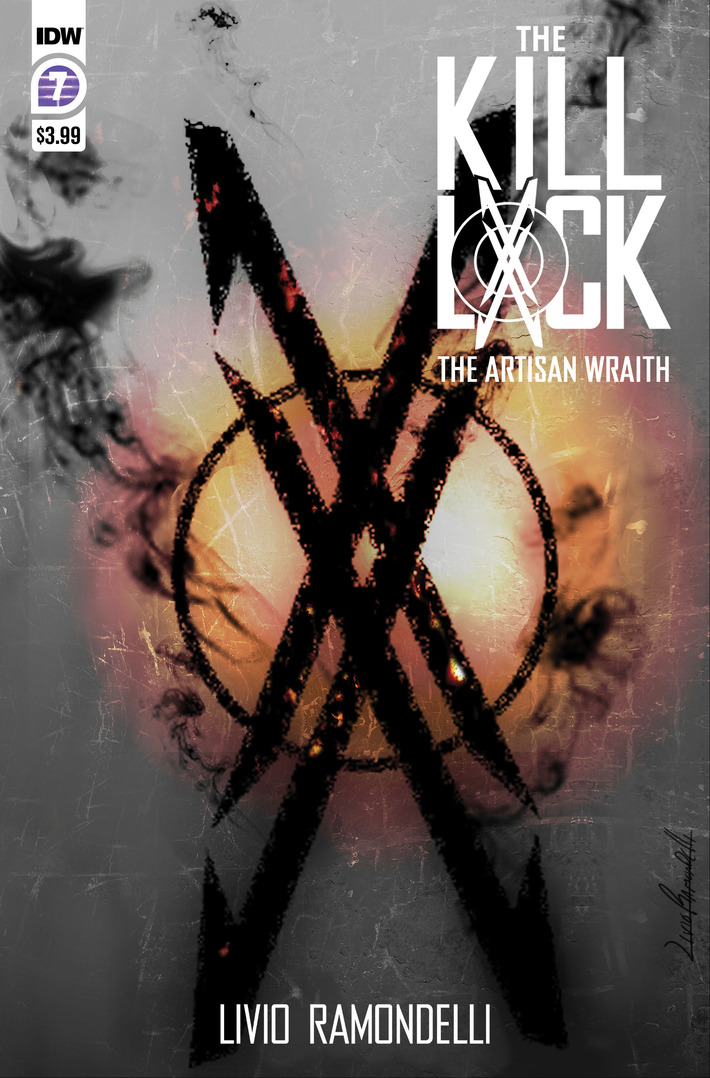 The ponies are regaled by an eccentric storyteller who gathers them around the campfire to tell tall tales of chaos magic, secret rituals, and an abandoned shop haunted by what sounds an awful lot like...Discord! Could this be the unlikely clue they’ve been looking for to track him down? Surge is angry, and she’s about to make it everyone’s problem… At least everyone in Central City. Sonic’s friends race to stop her rampage, but there’s something different about her. Something…more powerful. The Satanic Panic continues! Marty realizes that Burger Lord wasn’t so bad compared to the job the Church of the Immortal Heartbeat has in store for him and Alison. Meanwhile, Bernice goes all CSI trying to figure out what’s going on, and somebody’s gonna make out with Ratblood in the parking lot! But WHO?!

Hope you’ve got that extra-large soda ready, because things are getting spicy in this very special episode of Trve Kvlt, from the devilishly dynamic duo of LIANA KANGAS (Star Wars Adventures, She Said Destroy) and SCOTT BRYAN WILSON (Batman: Gotham Knights, Pennyworth). With the Komori (Bat) Ninja Clan behind them, Usagi, Yukichi, and Chizu flee over the snow-covered pass. They have to cross a frozen lake, but their position in the open on such a slippery surface makes them easy prey for the bats—and the ice is not completely frozen! Also, Yukichi learns a valuable lesson: you can’t trust a ninja.

IDW didn't provide any descriptions with these. 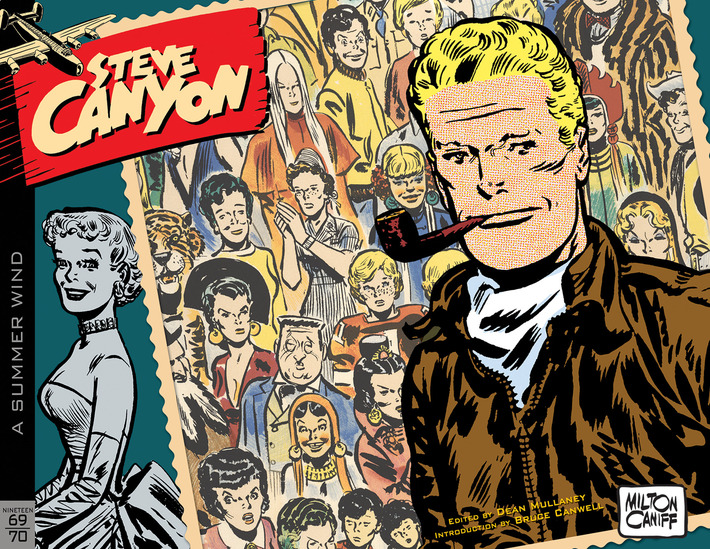 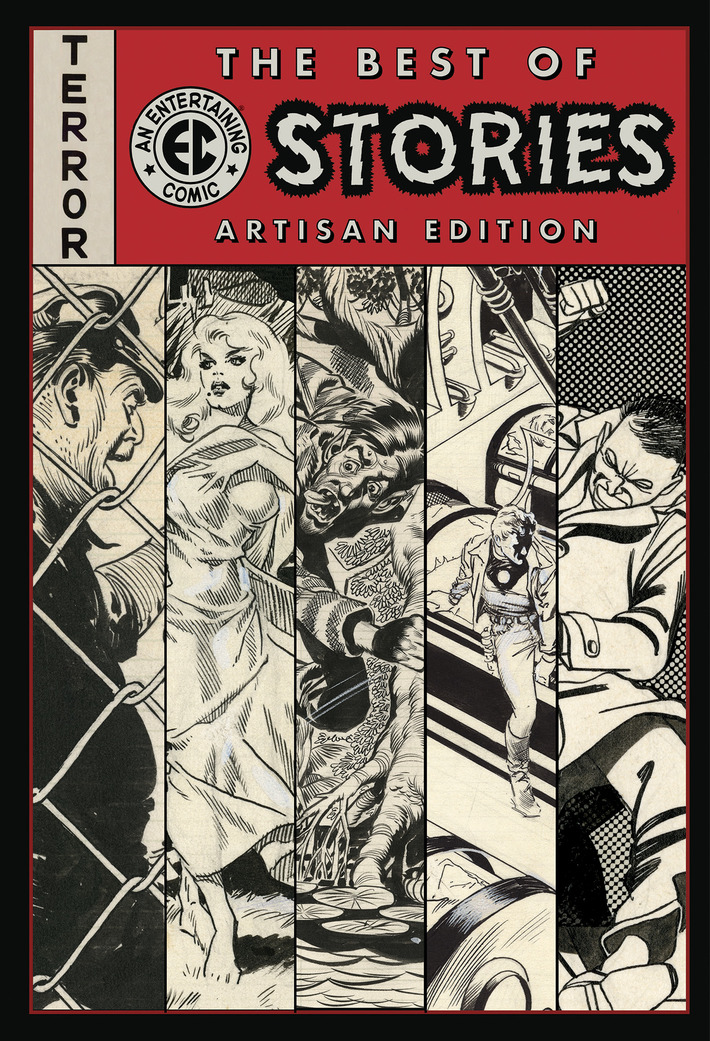 GENIUS ISOLATED: THE LIFE AND ART OF ALEX TOTH 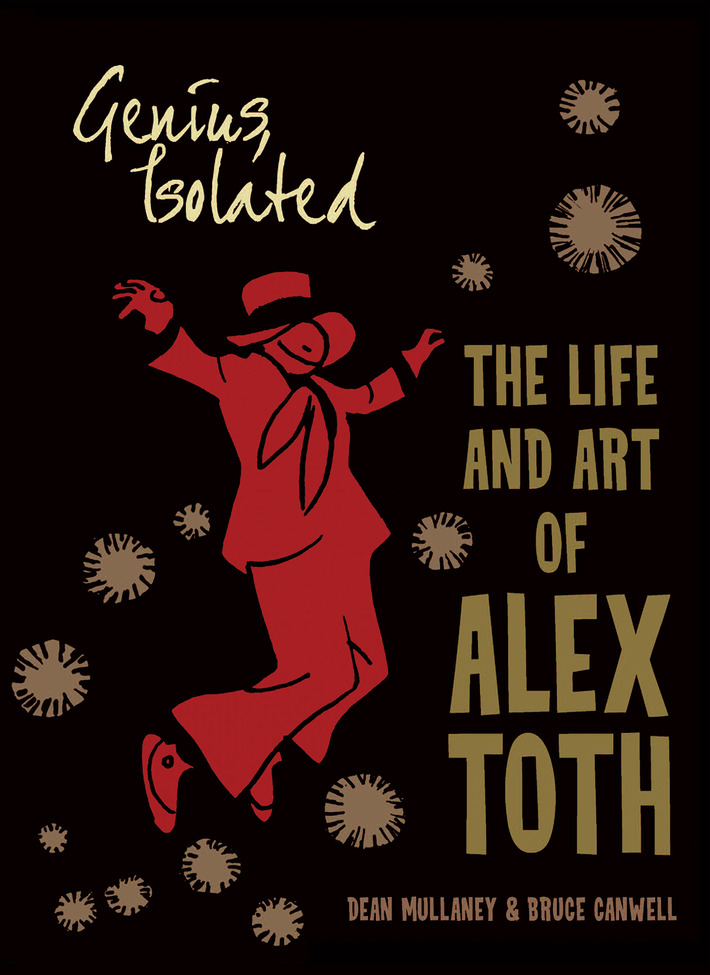 Richard Willis replied to Steve W's discussion A Cover a Day
"Jeff of Earth-J said: "First & Last" is evergreen. I'm fine with putting that…"
1 hour ago

Jeff of Earth-J replied to Steve W's discussion A Cover a Day
"Kubert would be fine with me, but what about "First & Last"? I thought that was gonna…"
2 hours ago

Steve W replied to Steve W's discussion A Cover a Day
"Have we come up with a subject yet for September? I remember someone suggested a while ago, that we…"
3 hours ago