If you've got questions about 'Jupiter's Legacy,' we've got answers

May 13, 2021 — The Internet is chockablock with questions about “Jupiter’s Legacy.” Here’s a Q&A to answer some of them.

A: In the comics, five friends follow their pal Sheldon Sampson’s visions to an uncharted island in 1932 where aliens give them super-powers. Don’t dwell on this; it was almost a throwaway in the comics to get the story moving. They could have all been bitten by radioactive spiders just as easily.

Sheldon becomes “The Utopian” and gets the full Superman suite of powers. The others aren’t as powerful as Sheldon, but each has one power stronger than the others, and all of them are stronger than before, more durable and can fly. Sheldon’s brother Walter, for example, has mental powers greater than the others and goes by “Brainwave.” Sheldon’s best friend George Hutchence becomes a mechanical genius, and goes by “Skyfox” (because he’s very vain).

All are very long-lived, and friction grows over the decades as Sheldon — leader of the superhero team “Union of Justice” — maintains classic Superman standards (no killing, no politics) while many of the others chafe at these restrictions in a changing world. This is especially true of the second generation of supers, some of whom are the children of Union founders.

That was all recorded in the first two Jupiter’s Legacy miniseries. A second set of two miniseries, titled Jupiter’s Circle, are set in the 1950s and ‘60s, and depict the growth of these frictions, as well as how Skyfox becomes estranged from the Union and how Richard “Blue Bolt” Conrad manages as a closeted gay superhero.

All of these stories are collected in Jupiter’s Legacy Vols. 1-4. 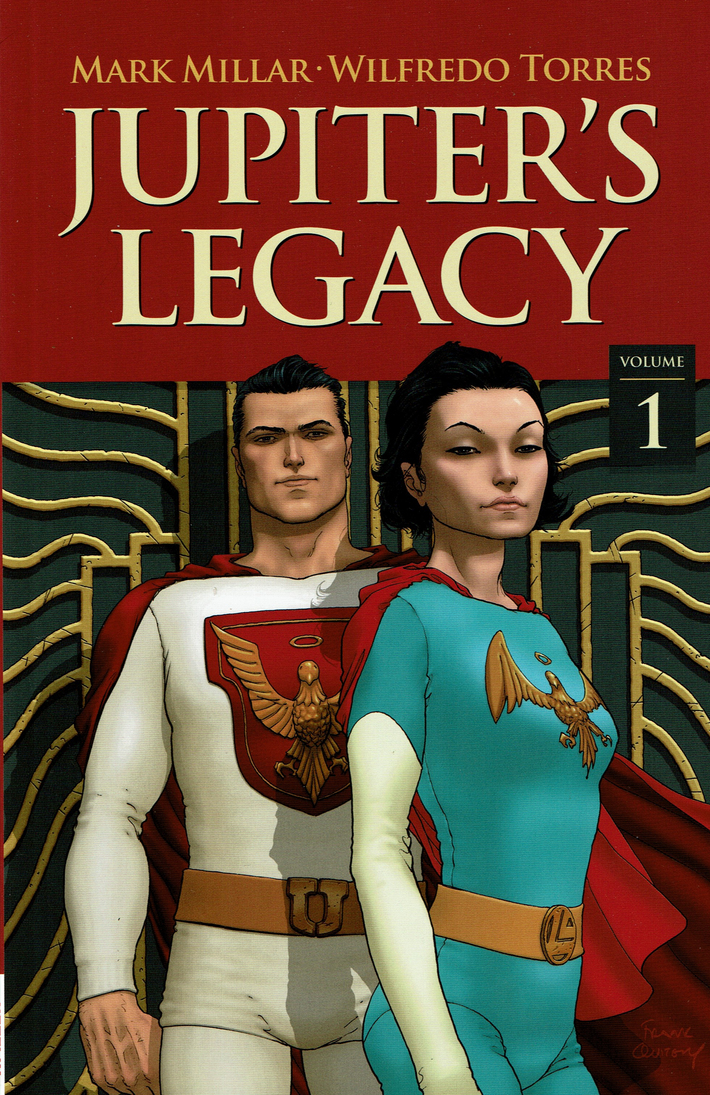 The heart of the Union of Justice in Jupiter’s Legacy is Sheldon “Utopian” Sampson, left, and his wife, Grace “Lady Liberty” Sampson. In the comics, Grace is Sheldon’s second wife, but whether the first marriage will be included in the story will have to be seen in Season 2, if there is one. (Cover art to Jupiter’s Legacy Vol. 1 by Frank Quitely, courtesy Image Comics)

Q: Does the TV show adhere faithfully to the comics?

Elena Kampouris gets huge points for her portrayal of The Utopian’s daughter Chloe; she looks exactly like her comics counterpart. Most of the uniforms and so forth show fidelity to the comics.

However, those who resent Sheldon in the comics do so because he’s such a Boy Scout that none of them can live up to his ideals. On TV, Utopian’s example is sharpened to an actual “Code” that Sheldon forces everyone to abide by, making his control more heavy-handed. That renders his opponents a bit more sympathetic than in the comics. (But only a bit.)

Also, the TV show’s entire first season is a huge extension of the backstory. For one thing, the origin story is told in lengthy flashbacks through all eight episodes, fleshing out the characters’ history and emotional conflicts. (The origin ran all of six pages in the comics.) For another we see a lot more of the present-day Union and its members than we saw in the comics, where (spoiler) the Union comes to an end in the third issue.

Finally, one of the six original superheroes is Black on TV, whereas in the comics they were all white.

I give these divergences a thumbs up, as some of the events in the comics didn’t have enough room to breathe and weren’t always plausible or well-explained. The TV show fixes that.

A: It depends on whom you ask.

Jupiter’s Legacy debuted on Netflix on Friday, May 7, and spent the weekend as the streamer’s #1 show. At the same time, it enjoyed a 76% “Fresh” rating on Rotten Tomatoes from audience reviews.

On the other hand, Legacy received only a 36% “Rotten’ on Rotten Tomatoes, roughly half of the audience score. Critics have been generally unfavorable, complaining about everything from the pace of the show to stale ideas to bad wigs. Q: Who’s right, the audience or the critics?

The critics are right that the efforts to make the actors look younger for the Depression-era scenes and older for the modern-day scenes aren’t always convincing. And the acting isn’t always up to Prestige TV standards.

Plus, we really have seen all these conflicts before, especially if you’re a comics fan. The award-winning DC series Kingdom Come (1996) already covered the idea of Superman feeling like an anachronism, generational superhero conflict and young supers behaving irresponsibly. And Kingdom Come had the benefit of starring the actual, honest-to-Krypton Superman!

That’s just one book — there are plenty more covering the same themes as Jupiter’s Legacy.

On the other hand, every story has been told somewhere before. What matters is the execution, and the writing really sparkles in Jupiter’s Legacy. There’s at least one LOL line in every episode.

Q: Is Jupiter’s Legacy a Marvel or DC property?

A: It’s neither. It was created by writer Mark Millar and artist Frank Quitely in 2013 as part of the author’s “Millarworld” imprint of creator-owned IP. It was published by Image Comics. Chloe Sampson (right) is the daughter of The Utopian and Lady Liberty, seen in stone images in back. Hutch (left) is the son of George “Skyfox” Hutchence. (Cover art to Jupiter’s Legacy Vol. 3 by Frank Quitely, courtesy Image Comics)

Q: What else have these guys done?

A: Pretty much everything in the comics field, as both are A-listers. But a lot of Millar’s creations have found their way into movies, too, including Kick-Ass, Kingsman and Wanted.

Q: If I like Jupiter’s Legacy, are there any other Millarworld properties on the way I should watch for?

Three of Millar’s previously published titles are being adapted to series. Super Crooks will be an anime, about eight supervillains going in together on one last, big score. American Jesus is about, well, the Second Coming, and may be a little controversial. The Magic Order presupposes a group of magicians keeping the world safe from supernatural threats, who are being killed off one by one.

There are also five upcoming films based on pre-existing comics, Empress, Huck, Prodigy Reborn and Sharkey The Bounty Hunter.

All of these are in early stages of development, so all we really know is A) they’re all created by Millar, and B) they’re all going to appear on Netflix.

In the meantime, Millar promises a third Jupiter’s Legacy miniseries, called “Requiem,” to wrap up the story. If nothing else, maybe we’ll find out what the heck Jupiter has to do with anything.

I have the four Jupiter's Legacy/Circle series and The Magic Order. Perhaps I should read them more carefully.

I thought that they were in the same vein as Mark Waid's Irredeemable and Incorruptible books.

It can get confusing, especially in the trades.

Jupiter's Legacy: Requiem, which is as yet unpublished, will pick up at the end of Jupiter's Legacy 2 (the second miniseries but the fourth TPB) and finish the story. They have not announced if it will be a single miniseries, or a group of two like the previous ones.

If you have read Jupiter's Legacy, Philip, then you know the Big Twist in Jupiter's Legacy #3 that I strenuously avoided spoiling in the column. But I can tell you that I was pleased to see the characters who didn't survive Jupiter's Legacy #3 get more attention on TV. The additional background also helps justify a certain heel turn in that issue that seemed abrupt when I first read it but now we get to see it happen organically.

I watched the first two episodes of the TV show this week, and liked it enough to read what they're now calling Vol. 3 today. I've always liked Frank Quitely's art, so it wasn't a hard sell. I enjoyed it, and plan to read the following volume. It's not a particularly original concept, but it still makes entertaining comics.

I read that there will not be another season from Netflix, although they are still going forward with other Millar projects. I understand the first season ends in a cliffhanger, which dampens my enthusiasm a bit. But I'm sure I'll finish watching it.