Overall, I thought it was okay.  I felt there were too many glib lines, and while there was some mystery, not enough to keep me truly interested.

A handful of thoughts:

* I dislike Skye and Ward from the get-go.  Too glib, too competent, too attractive, too obvious. Total Riker vibe from Ward.

* Was that a Ron Glass sighting?

* Fitz and Simmons feels a little too pushed too.

* There are 50 gazillion heroes and villains in the 616 universe.  I know Marvel doesn't want to pay any extra royalties, but a few familiar names would have been nice.  Hydra? AIM? Scorpio? The Hellfire Club?

* Has the Super-Soldier Serum become the go-to evil plan?

* No good explanation for Coulson's survival.  I was really expecting to hear LMD.

* I'm just not buying into this yet. At the same time, Whedon's got a rep for pulling rabbit's out of hats, so we'll see.

* Oh yeah, the ending made zero sense to me.  Did the bullet not pierce his skin?  Was it a special bullet to fix his condition?  Really hard to tell.

I've read tens of thousands, perhaps hundreds of thousands of superhero comics.  I know there are people on this forum who've read many more than I have.  We're all used to the tropes.  At a point we accept them as part of the package.  Frequently, we have fun with them.

I think that's one thing that's lacking for me with this TV show.  Where's the fun?  I'm not talking about glib remarks from one-dimensional characters straight from central casting, but something that pulls me in and makes me want to keep coming back.

Using Buffy the Vampire Slayer as a comparison, one of the things that made it work in the early years was that despite having a similar cast, there was a lot of goofiness with premises and characters, and for the most part the characters were likeable enough that when they started getting a little development, you were interested.  Plus you had villains that radiated a sense of menace, but were still fun and goofy (I still love the Mayor).

Unfortunately, on this show character development seems non-existent.  From the first episode, pretty much everything has been telegraphed.  We could see that Skye and Grant would be pushed together, we could see that Agent May would end up taking an active role in the team, we knew that Coulson's behavior would seem strange to many, and we knew that Fitz and Simmons would potentially provide some comic relief.  The first two episodes were pretty much by the number bits of business.  The last two have had better plots, but there's still just something missing.

Actually, I liked "Eye Spy" and I'm hoping that means things are looking up for the show.

I didn't hate the episode, and I thought it was an improvement over shows 1 and 2.  There are still a lot of bugs to be worked out though, IMO.

Actually, I liked "Eye Spy" and I'm hoping that means things are looking up for the show.

I thought I'd rescue this press release from the NEWS section and post it here:

New York, NY – October 3rd, 2013 – Coulson Lives! And we’re celebrating by bringing you Marvel’s Agents of S.H.I.E.L.D Variant Covers, inspired by the hit new series airing Tuesday nights at 8|7c on the ABC Network! Now Agents Coulson, May, Ward, Fitz, Simmons and the enigmatic hacker Skye will grace the covers of your favorite Marvel comics in the month of November. Each of these variant covers features a different character from the show, so don’t miss your chance to build up your variant collection with all 7, including a special cover featuring the entire cast!

You will find Marvel’s Agents of S.H.I.E.L.D. variant covers on the below comics, on-sale in November 2013

Marvel’s Agents of S.H.I.E.L.D., the first live-action television series from the House of Ideas, airs Tuesdays at 8|7c on the ABC Television Network. This dynamic, action-packed one-hour drama brings back Agent Phil Coulson to lead a team of highly skilled agents with one mission: To investigate the new, strange and the unknown around the globe, protecting the ordinary from the extraordinary.

New York (September 26, 2013) – Following the initial ratings success of Marvel Television’s “Marvel’s Agents of S.H.I.E.L.D.” airing on ABC, Marvel Entertainment, LLC has launched the first wave of official licensed merchandise inspired by the series co-created by Marvel’s The Avengers director Joss Whedon. To meet fan demand, Marvel has unveiled a range of “Marvel’s Agents of S.H.I.E.L.D.” consumer products including T-shirts, accessories, and posters which are immediately available for purchase at ABC.com, Marvel.com, Hot Topic and other specialty retailers. 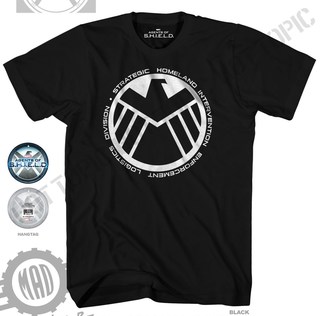 “The breakout success of our new primetime ABC series further underscores the unmatched affinity that fans have for the Marvel brand,” said Paul Gitter, senior vice president, licensing, Marvel at Disney Consumer Products. “This new consumer products line will give fans a great jumping off point to enjoy the new series and to extend their passion for Agent Coulson and the S.H.I.E.L.D. organization.”

The series stars Clark Gregg reprising his role as Agent Phil Coulson, Ming-Na Wen as Agent Melinda May, Brett Dalton as Agent Grant Ward, Chloe Bennet as Skye, Iain De Caestecker as Agent Leo Fitz and Elizabeth Henstridge as Agent Jemma Simmons. This dynamic, action-packed one-hour drama brings back Agent Phil Coulson to lead a team of highly skilled agents with one mission: to investigate the new, the strange and the unknown around the globe, protecting the ordinary from the extraordinary.

For more information on "Marvel's Agents of S.H.I.E.L.D.," visit ABC.com

And, uhm, didn't the guy monitoring ol' whatshername notice that her hands were suddenly white? Or that she was wearing wingtips over a pair of pumps?

I just had an opportunity to watch this episode, since it conflicted with the National League Playoff. I noted that Skye told him not to look down at his hand when scanning the access card so that they wouldn't realize it wasn't their female agent. I think he was careful to look straight ahead and not at his own body. The only time (IIRC) that his hands might have been seen was when he attacked the guard, but that was fast action and probably wouldn't have been noticed. The controlling agent had no reason to look carefully as he had no idea it wasn't the female agent.

I can believe a lot of stuff, but that he would never look at his hands, or would never be in view of the camera is ridiculous. Like when he was driving for instance. It is hard for me to believe he would be competent enough to keep them out of sight when the first time a uniformed dude shows up when the alarm sounds he acts very inconspicuous by looking at the guy, and then takes off running.

I turned off the internal analyzer, and perhaps because of that, I enjoyed this episode fine.

* Every time I see Skye, her hips and thighs seem bigger. I know how shallow that makes men sound. But the points is, if she's supposed to be a babe, I'm not receiving the message properly, which is probably one reason I find her annoying, instead of hot enough to excuse her being annoying.

* .We got another hint that all as not as it seems with Coulson.

* Was that opening sequence really filmed in Stockholm? I had no idea Sweden was so diverse!

* I actually laughed at the dialogue a few times this episode. It helps that I've heard Fitz and Simmons enough now that I can finally understand what they're saying.

* My favorite character after Coulson? Agent May.

* My VDR cut off during the previews. Was there a surprise after that?

* Shoulda listened to me.

* Get him hooked and he'll do anything, right?

* There go the ideals.

* Well that was a bit grisly for prime time.

Not a bad episode at all.  I was still hoping Skye would be led away and "disappeared", but I'll settle for what I can get.

This was a tad grisly.  I wouldn't recommend it for small children.

Product placement, to make money that's harder to get with commercials.

* Well that was a bit grisly for prime time.

It was a lot different than the previous episodes. Maybe a little more graphic than necessary.

I note that Coulson refers to being speared in the heart.

Most specifically, three characters died from some form of immolation, none of which involved butterflies flying out of their wounds afterwards.

It was a lot different than the previous episodes. Maybe a little more graphic than necessary.

* Skye. You betrayed the team.  What kind of treatment are you expecting?

* Aha!  More information about what actually happened to Coulson.

* Hmm; Is Simmons a biologist? Seems awfully high expectations for her to find a cure. Isn't Hank Pym on speed-dial?

* And of course, nothing bad will happen with them carrying the helmet, right?

* I can see where this is going.

* Will you two make out already?

Well, I didn't hate it.  I liked the idea of doing a mystery; unfortunately, it still ended up in a cliché.  I still don't like Grant and Skye.  The information about Coulson was good. Glad they didn't kill simmons as she's my favorite character on the show besides Coulson.

I suppose it's a slight improvement, but it's still not where I want it to be.