It's a big comics week on TV March 18, 2021 — It’s a big week for comics fans, only not in print. All the excitement comes from the small screen, where Zack Snyder’s Justice League and The Falcon and The Winter Soldier both make their premiere.

If you don’t know what Zack Snyder’s Justice League is, or how it’s different from the Justice League that came out in 2017, then Google it — and settle in for a long, painful read. It’s an epic tale of wounded egos, misbehavior on set, internal investigations and fan outrage.

The tl;dr is this: Zack Snyder, director of Man of Steel and Batman v Superman, quit Justice League when most of the principal photography was done due to a family tragedy. Joss Whedon, who had directed the first two Avengers movies, was tapped to finish. He re-shot most of it. Nobody much liked the resultant mish-mash, and fans have been agitating for the unfinished “Snyder Cut” to be released ever since. With the pandemic halting most major productions, Warner Bros. said “what the heck” (or something stronger, I imagine), handed Snyder $70 million, and bade him finish his version.

Which is four hours and two minutes long. I do not lie.

Full disclosure: I am not a fan of all of Zack Snyder’s work. I did enjoy his adaptation of Frank Miller’s semi-fascist, borderline homoerotic 300, because I didn’t take the over-the-top, toxic masculinity seriously. I sat back and enjoyed the spectacle, something Snyder does very well.

I’m ambivalent about Synder’s adaptation of Watchmen. Virtually every scene of the movie is a panel-by-panel re-creation of pages from the graphic novel, which is good, I guess?

But just like a prose novel, there is too much information in a graphic novel for all of it to make the screen, so a great deal has to be left out. And I didn’t care for Snyder’s selection of what to include and what to leave out. 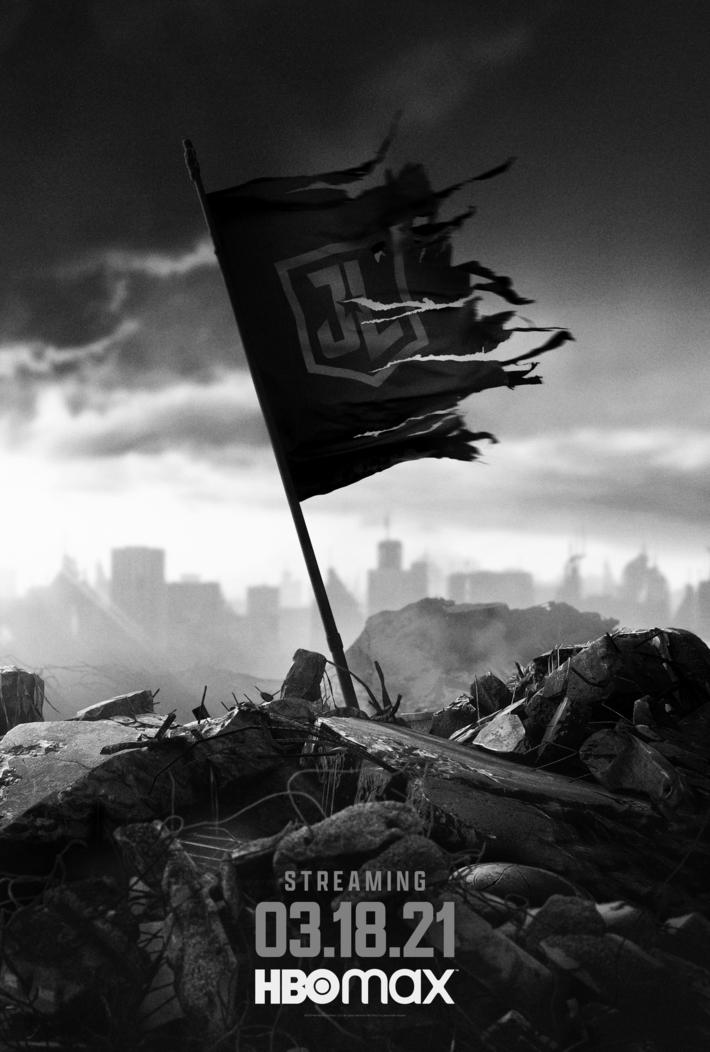 Nothing downbeat about this poster, is there? (Courtesy WarnerMedia)

For example, he left out the points writer Alan Moore was making, that vigilantism is an inherently fascist concept, and that the Watchmen “heroes” were all extremely screwed-up people whose motivations were psychopathic and/or psychosexual. Despite Sen. Ted Cruz’s takeaway, Alan Moore did not write Rorschach as a hero — only for Snyder to make him look like one.

Which brings us to Snyder’s two DC Extended Universe movies, which I actively dislike. Man of Steel and Batman v Superman surely had their good points, but I couldn’t overlook this basic flaw: Snyder doesn’t seem to understand what makes Superman so super.

Hint: It’s not the super-powers. It’s his heart. He’s an immigrant who loves his adopted country for taking him in. He’s an alien, yes, but as salt-of-the-earth, heartland America as you can get. He’s incredibly powerful, but he’d rather help a neighbor's cat out of a tree than rule the world. It’s his unselfish use of his power that makes him great.

Snyder, by contrast, had Superman feel angsty and alienated. Had his parents teach him that letting people die to protect his secret identity is OK. Had Superman kill his opponent (General Zod) instead of finding another way — whereas, I hasten to add, “he’ll always find another way” is literally Superman’s description in dozens of comics I’ve read.

So I’m not stoked about Zack Snyder’s Justice League, which hits HBO Max on March 18. I’m bracing myself for four hours of bombast, dark colors and nihilism.

But, you know, I grew up on Superman comics, which taught me to look for the best in people. So I’ll try to watch it with an open mind.

The next night, March 19, brings the premiere of The Falcon and The Winter Soldier. It’s scheduled for six episodes, in the 45- to 55-minute range per episode, on Disney+.

If you don’t know who these characters are, you haven’t watched any of the Marvel movies involving Captain America, for which I can only pity you. But for the record, they are the Star-Spangled Avenger’s best friends, and now that he’s out of the picture, it is assumed one of them — the Falcon, in all likelihood — will continue Cap’s legacy.

But the show isn’t named Captain America II and The Winter Soldier, which is our first clue that Cap’s plan to hand-pick his successor won’t go smoothly. Instead, we know already that the show will introduce John “U.S. Agent” Walker (Wyatt Russell) who was named the new Captain America by the government in the comics a few years back, which is likely the case here.

Also returning are Emily VanCamp as Sharon “Agent 13” Carter, Zemo (Daniel Bruhl) and Batroc the Leaper (Georges St. Pierre), who will finally get the attention they deserve. The villains — well, aside from Zemo, who I suspect will make a hero turn — are the Flag-Smashers, an organization dedicated to wiping out nationalism.

Aside from that, I don’t know much more about the show than you do. But what I can tell you is one Fun Fact to Know and Tell about each of the series leads: 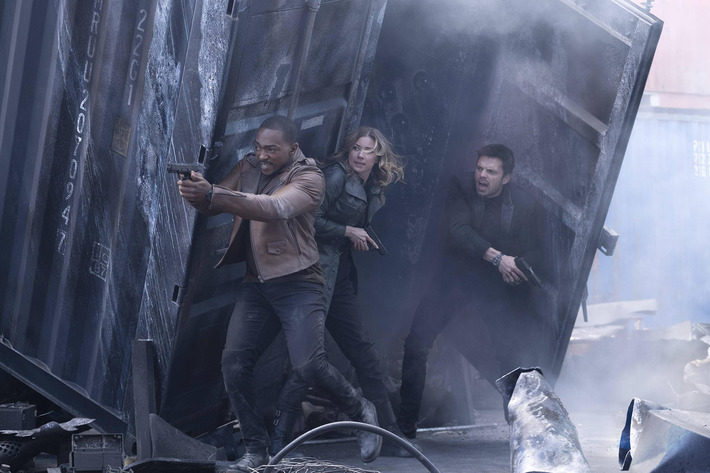 When pre-Falcon Sam Wilson was introduced in 1969, he was a New York social worker trapped on Exile Island, leading a revolution against the Red Skull’s henchmen. What a great guy! Which, by and large, is how he’s usually depicted.

But in the ‘70s, writer Steve Englehart changed Falcon’s backstory to that of “Snap” Wilson, a New York thug and drug dealer. Through some Cosmic Cube shenanigans (think “Reality Stone”) the latter origin was kinda erased, and then kinda brought back, and it’s unclear which of the origins is true. Regardless, “Snap” isn’t mentioned much any more.

When Captain America was revived in 1964, it was revealed that his partner James Buchanan “Bucky” Barnes was killed in 1945, in the same disaster that left Cap frozen in an iceberg.

But then, when fandom had finally accepted that Bucky wasn’t coming back, that he shouldn’t come back, that he couldn’t possibly come back in any plausible manner … he came back. And it was a great story!

Writer Ed Brubaker came up with a tale in 2005 revealing that Bucky had been rescued by the Soviets in 1945 before he bled to death (he’d lost an arm in an explosion) and used their own experimental Super-Soldier Serum on him. It didn’t work quite right, but they did get a mind-controlled, super-strong assassin out of the deal (with a cyborg arm) that they would put into cryofreeze between missions — a “Winter Soldier.” With deft panache, Brubaker had explained away every problem in a potential Bucky return — why he hadn’t aged, why we hadn’t heard from him, etc. — and did it all in a rip-snorter of an espionage tale that stretched across six decades.

So now “Bucky dead” just means “we thought he was dead for 41 years.” What will we use now to mean permanently dead? “Krypton dead”? “Uncle  Ben dead”? “Thomas and Martha Wayne dead”?

You know, I’m not even going to try.

Why was Bucky named James Buchanan Barnes? Most people think that President Buchanan was one of the worst presidents. He was either pro-slavery or pro-slavery-adjacent.

What else is "Bucky" short for?

Why are there so many statues of Confederate generals in the South?

I don't know any more than anyone else about this, but I always figured the nickname "Bucky" came first, and the "short for Buchanan" was invented later to justify it.

Or they picked a presidential name out of the blue, not knowing anything about Buchanan. We might be lucky he wasn't named for even more obscure Chester A. Arthur. Chas? Artie? The mind boggles.

What else is "Bucky" short for?

Why are there so many statues of Confederate generals in the South?