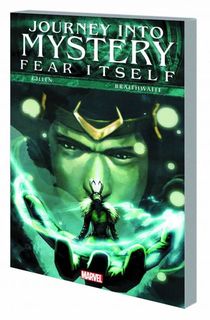 Journey Into Mystery was relaunched in 2010 with issue 622. In it, Kieron Gillen took the reborn ‘Kid Loki’ and made him the star of a highly entertaining, and rewarding series of comics.  To my mind, Gillen’s Journey Into Mystery may be one of the best series Marvel has produced in the last 10 years.  When it arrived on the scene it quickly established itself as the most ambitious, experimental, thoughtful and heartfelt book Marvel were then producing. In some ways, it was a harbinger of Marvel's current wave of critically acclaimed 'alternative' superhero books, such as Hawkeye and Daredevil and the more recent promising examples such as She-Hulk and Ms Marvel. Before JiM it seemed like all Marvel books had a similar feel (dark and dystopian) and a similar philosophy (militaristic and reactionary).

In contrast to much of Marvel’s Dark Reign line of books, Journey into Mystery featured a main character that survived and prevailed by his wits rather than by depending on force of arms.  Further, Loki was someone for whom acceptance and consideration from his peers was more important than being perceived as a swaggering tough guy. An emotionally vulnerable child was certainly an unusual main character for the times.

As I love a short-cut , here is a little summary of Loki’s character in the context of this series, which I have just swiped from a post of our good Captain himself:

Journey into Mystery is about Loki as a boy (again), this time with foreknowledge of how his last life turned out, which he'd like to avoid (and he's got a raven named Ikol -- spell it backwards -- who is the reincarnation of his previous self, giving him bad advice). He's still the God of Mischief, but not of Evil, so he's extremely clever and not very good at being good and doing as he's told, but he's got a good heart and he executes elaborate plans that look like he's slipping back into his old ways, but usually ends up all right in the end. He also has to deal with universal loathing and suspicion from the other Aesir, with the exception of big brother Thor (whom he worships) and Sif (upon whom he has a crush). Speaking of crushes, he has a love/hate relationship with a similarly-aged handmaiden of Hela named Leah (spell it sideways), although it's kind of implied that Leah is an actual aspect of Goddess of Death, rather than just another little girl goddess. (I'm not explaining it well because I don't really understand it.)

Couldn’t have put it better myself,… which is why the pilfering.

As far as a discussion goes, it’s hard to know where to start with the enjoyment of this collection.

I suppose first of all, it’s a good start to Loki’s adventures in this persona.  We quickly find out where Loki stands in the esteem of his godlike folk (very low) and we get the background both historical (this follows on directly from Loki’s self-sacrificing death in Siege) and current. (As the run begins, Odin is freaking out at the arrival of the Serpent, the chief villain of Fear Itself, the ‘Big Event’ of 2010.)

This collection is titled Journey Into Mystery: Fear Itself, and it has a fascinating relationship to that event.  Gillen has talked elsewhere how he set himself the task of ‘leaning into’ the event, by which he meant working with it, and ‘going with the flow’ of it, rather than merely intersecting it with the story he wanted to tell, or begrudgingly allowing a few issues of his series to hit the required editorially-mandated story beats before getting back to what he really wants to be doing.  Hopefully we'll talk some more about this.

There’s a lot to discuss about how the early arcs of Journey into Mystery relates to Fear Itself and how the two compare in dealing with a shared story set-up.  In fact there’d be a lot to learn in seeing how Journey Into Mystery succeeds completely in what it sets out to do with the story elements of Fear Itself, whereas Fear Itself, …itself is largely seen as a disappointing failure.

But there's still much to discuss...

I read all of Gillen's Thor from the library as a continuation of JMS' relaunch.  At the time, I didn't give the writer much consideration.  Just some hack brought in to keep JMS' balls in the air, so to speak! (I've since revised this opinion.)

Gillen was left with a bit of a mess, having to work with Baldur being a dimwit who moves his people into the care of Dr Doom on Loki's advice.  But he gave it a fair old go, and things were moving along nicely by the time that run of Thor ended.  I'd reccomend the run.  They are certainly good 'continuity comics' that fill the gap between JMS' Thor set-up and Fear Itself/Journey into Mystery.

I'm giving Fraction a hard time on this thread, because Fear Itself makes a handy comparison with Journey Into Mystery, but I have to acknowledge that Kid Loki was Fraction's idea originally.  Gillen staying on as 'interim' writer on Thor for longer meant that he was the one who wrote the stories where Thor went looking for Loki, and brought him back.  The outcome was good, but at the time, Thor seemed just as dimwitted as Balder, for wanting to bring back such a proven villain, and give him a second chance.

I dropped JiM when Loki left.  Comics are very expensive out here, so I couldn't keep on buying a comic just because of the title.

Maybe the Sif series would be worth a look sometime, if I come across it.

Worth noting too, that Gillen wrote a Beta Ray Bill mini-series before embarking on his Thor stint, so he seems to have been closely aligned with the Asgard tales from the start.  I think Sif was a co-star in that.

Everything comes up for sale there eventually, so I'll look out for it.

As a 10-issue run, does it have a good self-contained feel, or does it sort of just stop, or what?

I thought it had a good self-contained feel to it.  Certainly not a sudden stop to it at all.  The Talking Comics website praised the series up at this link:

There's spoilers there of course, but well worth a read; I'll just pull up this quote:

And rest assured, that although JIM may have met an early end, Sif’s journey is a complete one, and there are no plot points left open or questions unanswered.

To compare it again with Fear Itself, which I'm beginning to suspect no-one has read, Fraction insists there that the stakes are that Earth and Asgard may perish, and Thor will die by a prophecy.

Indeed I have not. Besides Shadowland I haven't bought the main book of a Marvel event series new off the shelf in close to 20 years. The only 2 series I read that had tie-ins to Fear Itself was Thunderbolts and Black Panther. The latter barely paying lip service if memory serves. So, I am sorry to say that any comparisons to Fear Itself will be lost on me.

This was probably what disappointed me the most. That we didn't get a complete story here, and that is really my only ding against it.

What I really liked about it the series was the exploration of all of the relationships here, even if only for a few pages in some cases. Loki and Thor, Thor and the Warriors 3, Mephisto and Hela, Loki and Ikol (okay my other ding, I really hated the names of Ikol and Leah. It reeks way to much of Joe Kerr and Rohtul), etc.

Even though everyone knew he was still the God of Mischief, many people still couldn't help treating Loki like a little kid, which he is of course.

Plus, you know me, the meta-fiction and subtext can be fun, but completely useless if the story on its face value isn't good. This one is, so that is just dandy with me.