Killadelphia Vol. 1: Sins of the Father 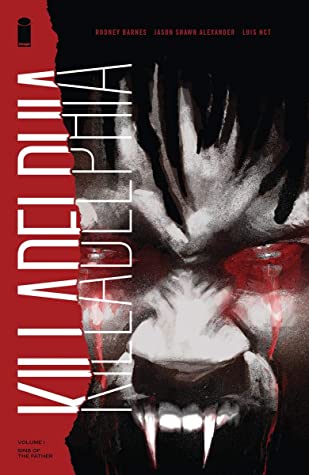 Killadelphia is a vampire story with a unique hook. It begins when Baltimore cop Jimmy Sangster returns to his Philadelphia roots to bury his murdered father, a revered police detective. His hometown has become a hotbed of poverty and corruption, and something about his father's death doesn't feel right. Reading his father's diary reveals the existence of something unimaginable: vampires. Jimmy visits the scene of his father's death and finds a nest of vampires, but the indisputable proof comes when he exhumes his dad's undead corpse. (Dad's comment is, "What took you so long, boy?")

But we haven't gotten to the hook yet: the vampires are led by former U.S. President John Adams, who contracted the condition on a trip to the Caribbean (along with his wife Abigail) after he had retired from political life. But he never stopped thinking about politics, and is building a vampire army--which he intends to lead to take over the country, starting with Philadelphia.  This is the big secret Sangster senior uncovered before his "death," and stopping Adams becomes the mission for him and his son, along with a medical examiner who has also reluctantly come to believe in the existence of vampires.

As a newly created vampire Sangster is still learning about how to use his powers. Fortunately the group finds an ally in the form of a disillusioned Adams lieutenant named Tevin. And as it happens, Tevin has also figured out the meaning of a mysterious magic book. The big conclusion only sets the stage for the next chapter. It's one worth waiting for, both for Barnes' story and the impressionistic art of Alexander and Nct.

This has been a great series.  The art fits the story perfectly. The story has plenty of twists and turns that I've enjoyed. Plus, Philadelphia isn't a location seen much in comics.