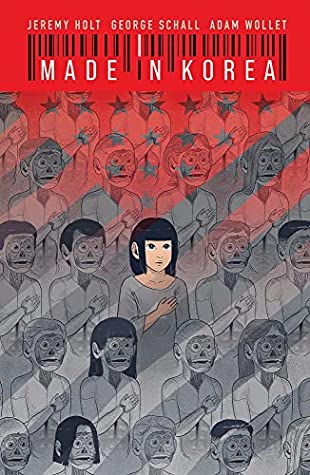 A Korean engineer makes a breakthrough Artificial Intelligence discovery, but realizing that he did it on company equipment he quickly moves to keep it for himself. It needs a real-world test, so he installs it in a nine-year-old female android named Jesse and arranges for an American adoption on the sly. Jesse begins to adapt to her circumstances, and everything indicates that she is thriving, exceeding all expectations of her programming. So, her inventor decides to take her back into his care, which winds up being complicated. Jesse wants to make friends, and becomes involved with a pair of guys planning a mass school shooting. This is a plot development that is dramatically effective, but cuts short a more normal personality development. Watching Jesse adapt to high school would have been a very different story, but evidently Holt felt it needed a crisis. In the aftermath Jesse goes on the run in the company of her inventor, and finally transfers her consciousness into another android--an adult male, who her adoptive parents freely accept. There had been an implication that the inventor was gay, but that is the only preparation for the final plot twist. In the end this is an AI story that takes unexpected turns into sexual identity issues. Schall's art is up to all of the challenges of the plot, simple but effective.

Philip Portelli replied to Steve W's discussion A Cover a Day
""NO WIRE HANGERS!!!""
3 hours ago

Jeff of Earth-J replied to Wandering Sensei: Moderator Man's discussion What Comic Books Have You Read Today?
"EDITING..."
3 hours ago

Tracy of Moon-T replied to Wandering Sensei: Moderator Man's discussion What Comic Books Have You Read Today?
3 hours ago

Jeff of Earth-J replied to Wandering Sensei: Moderator Man's discussion What Comic Books Have You Read Today?
""GOLDEN AGE" FIND!: When I went to my LCS today, the owner pulled out a box of his most…"
3 hours ago

Jeff of Earth-J replied to Jeff of Earth-J's discussion Ultraman Tiga
"Yikes! It's been four months since we stopped watching Ultraman (Tiga). Now that TV is off the…"
4 hours ago

Philip Portelli replied to Steve W's discussion A Cover a Day
"And that Lana calls her husband "Superman-Blue" in private!"
4 hours ago

The Baron replied to Steve W's discussion A Cover a Day
"I like how he says "Lois Lane", so that Lana knows he doesn't mean Lois Witkowski or…"
4 hours ago