Got this in a press release: Man, this raises a zillion questions. Like, are they ever going to finish the original Miracleman series? And, won't this upset the power balance in the Marvel Universe? And, won't Miracleman want to do in the MU what he did in his own universe (taking over the world to create a Utopia)? And does this mean that Miracleman Jr. and Kid Miracleman are in the offing? (The latter is terrifying.) And why on Earth does Marvel need a faux Fawcett Captain Marvel, when they've already got two faux Supermen (Sentry, Hyperion)? And why not change him back to Marvelman now? Or Captain Marvelman (heh)?

Wait, someone finished The Mystery of Edward Drood? I'm not sure if that's to be celebrated, or mocked.

And yeah, there are some people who'd like to see the original Miracle man finished, because I'm one of them!

CELEBRATE ONE OF COMIC BOOK'S GREATEST ICONS WITH THE MIRACLEMAN OMNIBUS!

New York, NY— December 31, 2021 — KIMOTA! In honor of the 40th anniversary of Miracleman’s groundbreaking reinvention, Marvel is proud to announce the brand-new MIRACLEMAN OMNIBUS. This extraordinary collection will house the influential work on the character from all of its legendary creators such as Alan Davis, Garry Leach, John Totleben, and more. Fans and comic book history aficionados will finally get a chance to uncover Miracleman’s origins, his incredible feats and the everyday struggles of his alter ego, freelance reporter Michael Moran, who must reconcile his life as the lesser half of a god in glorious Omnibus format. Considered one of the medium’s greatest masterpieces, Miracleman’s adventures launched a new wave of comic book storytelling and its extraordinary impact on the super hero genre is still felt to this day.

Middle-aged reporter Michael Moran always knew he was meant for something more. When an unexpected series of events leads him to reclaim his destiny, Miracleman is reborn. But Miracleman’s return threatens unravel Moran’s life. Their connections to Dr. Emil Gargunza and Project Zarathustra bring with them disturbing revelations and trigger the return of a childhood friend who, beneath his sinister smile, has become something terrifying. Pushing the concept of the super hero to its logical conclusion, MIRACLEMAN is nothing short of a revelation.

This first-ever Omnibus edition, complete with a massive trove of covers, original artwork and rare features, will include:

Check out two of the direct market exclusive covers featuring artwork by Miracleman artist Garry Leach as well as artist Kevin Nowlan. Stay tuned for the reveal of the all-new main cover by comics great Alan Davis and experience the series that transformed the super hero and stands as one of the most influential works in the comic book artform in an all-new format when the MIRACLEMAN OMNIBUS arrives in September 2022. 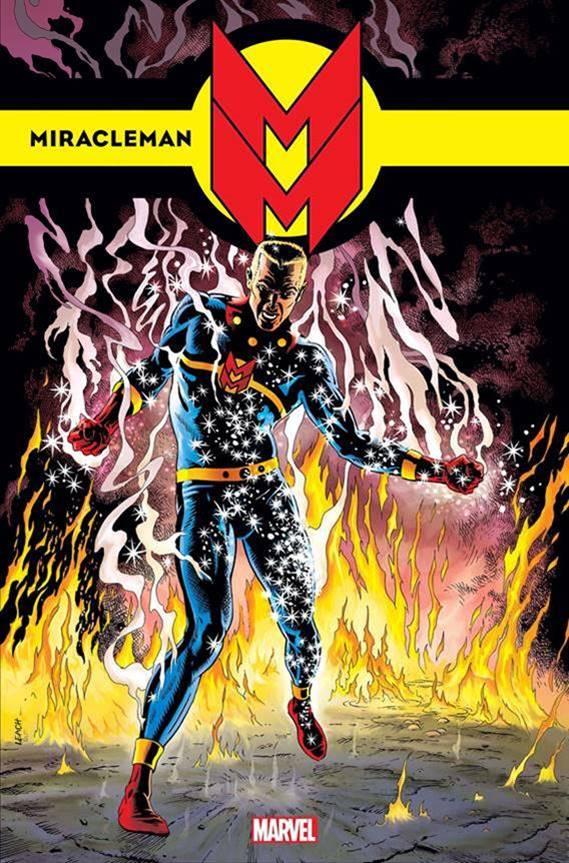 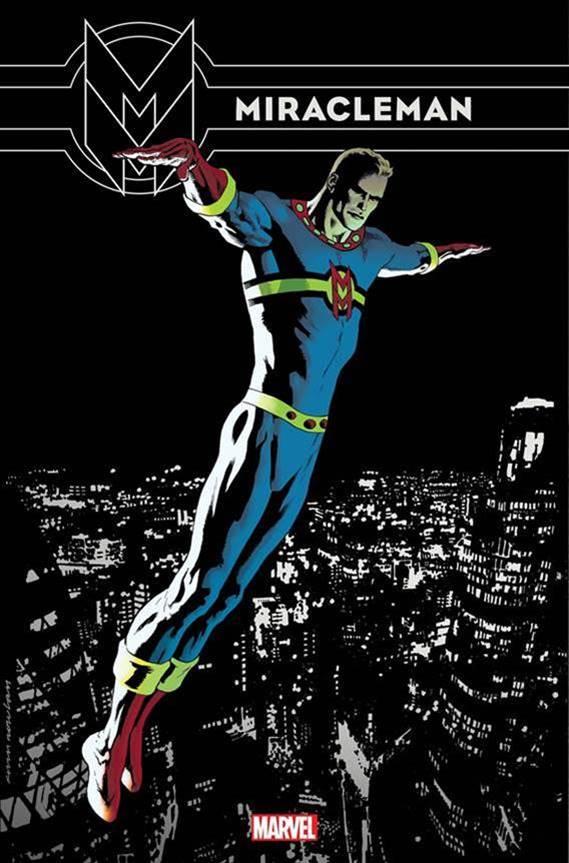 Miracleman #2 and #4 are omitted because they reprint material from Warrior, which is already included. And there's material this omnibus doesn't include, maybe enough for another omnibus (especially if it finishes the story): Miracleman #17-24, Miracleman: Apocrypha #1-3, Miracleman: The Golden Age #1-6 and Miracleman: The Silver Age #1-3. Some of those may overlap -- it's been many years, and I don't remember.

Wait, someone finished The Mystery of Edward Drood? I'm not sure if that's to be celebrated, or mocked.

Permalink Reply by the_original_b_dog on January 3, 2022 at 7:31pm
Golden Age started in issue 17, so it seems the Gaiman run isn't here. (Was Buckingham the regular artist for Gaiman? Can't remember.)

It's probably best that Apocrypha isn't included. I recall a lot of it was hot garbage, but I think it did include some early Alex Ross art.

It's been so long, I don't even remember if I read Apocrypha. Was it an anthology? (Good to see you again, B-Dog.)

"When Eclipse gathered together some of the top talents in the comics industry to work on their own versions of Miracleman, whom Alan Moore so masterfully resurrected, this title somehow seemed appropriate. In Apocrypha, eleven creative teams were given a shot at telling a story that featured what they thought would be the perfect Miracleman scenario. The list of creators included Alex Ross (Marvels) Neil Gaiman (Sandman) Norm Breyfogle (Prime) Stefan Petrucha (The X-Files), and many more. These stories were printed in this three-issue anthology series. A framing story by Neil Gaiman and Mark Buckingham shows Miracleman—a man become like God—reading them as comic books in order to discover the nature of human aspiration."

A good, and kind, summary, Jeff.

Good to see all of you again, too!

I copied it from a seller on Amazon.

did someone at Marvel think, "DC pissed off Alan Moore by bringing the Watchmen characters into their universe, let's get in on some of that action?"

Ha! Although there's a tale there.At one time Neil Gaiman and Todd McFarlane fought a court battle over the rights to Miracleman, although it turned out Mick Anglo owned them, and Marvel bought them outright.

Should I be reading Timeless to get in on the ground floor of the Miracleman reboot?

I'm under the impression Timeless is a one-shot.

Yes. It was a one-shot.  Basically it functioned as a means to position Kang as the ultimate heavyweight of the Marvel Universe and to set up a storyline about various MU timelines colliding. The very last panel hints that Miraclemen will probably exist in one of these timelines. This is so reminiscent of the way DC pulled Doc Manhattan into the DCU it's almost comical. Right down to that clockface image in the promo.

Sort of like when DC did Identity Crisis by big-shot novelist Brad Meltzer, and Marvel immediately launched a knock-off called Identity Disc by a lesser-known novelist named Bob Rodi. Nobody can convince me that was a coincidence.

I have no memory of Identity Disc whatsoever. I had to look it up to make sure you weren't joking.

Sort of like when DC did Identity Crisis by big-shot novelist Brad Meltzer, and Marvel immediately launched a knock-off called Identity Disc by a lesser-known novelist named Bob Rodi. Nobody can convince me that was a coincidence.

"Basically it functioned as a means to position Kang as the ultimate heavyweight of the Marvel Universe and to set up a storyline about various MU timelines colliding. The very last panel hints that Miraclemen will probably exist in one of these timelines."

I looked at Timeless the following week, learned everything about it I needed to know and saved myself six bucks.

"This is so reminiscent of the way DC pulled Doc Manhattan into the DCU it's almost comical. Right down to that clockface image in the promo."

That thought hadn't occurred to me, but you're exactly right.

Jeff of Earth-J replied to Jeff of Earth-J's discussion Swamp Thing
"Actually, that's not entirely true. I did buy one addition issue, #129. VERTIGO: I…"
54 minutes ago

Peter Wrexham replied to Steve W's discussion A Cover a Day
"National Roller Coaster Day?  I did not know that! Fortunately, I've got lots of roller…"
1 hour ago

Jeff of Earth-J replied to Jeff of Earth-J's discussion Dark Shadows
""Oh, wow.. that's kind of dizzying..." I used to have a theory to explain, in story,…"
1 hour ago

Lee Houston, Junior replied to Steve W's discussion A Cover a Day
"Today is National Rollercoaster Day here in the United States and this is the only one I've…"
2 hours ago

Rob Staeger (Grodd Mod) replied to Jeff of Earth-J's discussion Dark Shadows
"Oh, wow.. that's kind of dizzying... I love it!  Although in the name of simplicity, I…"
3 hours ago

Jeff of Earth-J replied to Jeff of Earth-J's discussion Sandman - "Season of Mists"
"When I first learned that our friend was interested in reading Sandman, I immediately offered to…"
5 hours ago

Philip Portelli replied to ClarkKent_DC's discussion "The Flash" movie star Ezra Miller busted for burglary
"Ezra Miller has issued an apology for his actions and legal troubles. Well, if he's sorry,…"
7 hours ago

doc photo replied to ClarkKent_DC's discussion R.I.P. Paul Coker Jr., of MAD Magazine and Rankin/Bass TV specials
"Coker had a very recognizable style. Knowing his work from Mad, one could easily spot his hand on…"
7 hours ago