Having just finished watching the first (double) episode of Agent Carter (aka Marvel’s Agent Carter) I thought I should start a thread to discuss the show.

I think it's helping a lot that Agent Carter has hit the ground running. By the time Agents of S.H.I.E.L.D. started to hit it's stride, I was already tired of the show. I'm hearing it's quite good now, but it spent it's credit with me in the first 11 episodes.  Not to mention putting the show on hiatus over Christmas gave me a great jumping off point.

The Agent Carter show on the other hand, clearly spelled out it's premise in the first episode, gave us some very likeable (and dislikeable characters) straight away.  Some of the other agents remind me of Lt. Burke from Sandman Mystery Theatre.  There's layers of complexity that just really make the show, IMO.

The February 3 episode had a lot going on. The Howling Commandos working with Peggy were a lot of fun. Sort of an adjustment not having them with Nick Fury, which was also touched upon in the movies. Neal McDonough was almost unrecognizable as a well-executed Dum Dum Dugan. A nice touch that they killed Junior Juniper like in the original Sgt Fury comic.

I just watched the last two episodes of what I hope is season one. I don't remember Project Rebirth (Captain America) being attributed to Howard Stark before. Maybe I missed it.

The Marvel Movieverse established Howard as part of Project: Rebirth in Captain America: the First Avenger.  Personally, I thought it made him a bit too old to be Tony's father by backdating him to the 1940s, but what can you do?

I could be worse. They could set Project Rebirth in the Vietnam War.

Permalink Reply by Dave Elyea on February 27, 2015 at 5:08pm
True. Likewise, I'm not sure I could stand it if they'd just created a genius grandfather for Tony to serve as a WW2 era Stark connection.

I don't know. Given that Howard Stark was more or less a retcon in the first place, and given the entire ludicrousness of Iron Man's overarching story--even taking the Vietnam War out--if they wanted to say that Howard is the grandfather, I don't mind.

I will reiterate once again that if you aren't on the bandwagon, it's one that's worth jumping on...there's pie, and bacon and bacon pie...and KITTENS!

True. Likewise, I'm not sure I could stand it if they'd just created a genius grandfather for Tony to serve as a WW2 era Stark connection.

I think Howard Stark was introduced fairly early on in the Iron Man mythos, but only as Tony's wealthy dead father, the munitions mogul whose fortune & business interests made it possible for Tony to indulge his genius (and other things).  As time went on, Howard was retconned as a genius himself, and was credited with some of the stuff that Tony had done back in the 1960s, but was now too young to have been responsible for.  Since I feel it makes Tony less special to be the genius son of a similar genius, to establish yet another, earlier genius Stark to the family tree to cover 1940s mad science would be taking things too far for my tastes.

The great thing about the show is that you don't have to know much Marvel continuity to enjoy it (it probably works pretty well for viewers who don't know much beyond who Captain America is). I'm in that camp myself, having never been much of a Marvel reader. I did know who Dum Dum Dugan was, but that was just a little bonus. Like all the Easter eggs in the current Flash TV show. Fun for viewers who know them, but they just fly past those who don't.

I really enjoyed this show, and hope that it does return in some form. I thought the short story arc format was effective, so I'd be happy to see it recur that way periodically.

I think Howard Stark was introduced fairly early on in the Iron Man mythos, but only as Tony's wealthy dead father, the munitions mogul whose fortune & business interests made it possible for Tony to indulge his genius (and other things).

I read all the original Silver Age Iron Man stories and continued to read them into the late 70s. If there was a reference to Tony's father it must have been in passing as I don't remember it.

I didn't buy any titles involving the character when I returned to comics in 1989. I first encountered the name Howard Stark in discussions of the more recent comics and in the first Iron Man movie. Someone on the Round Table recently said he was originally Anthony Senior? Maybe they changed it to invoke Howard Hughes.

Tony Stark's father first appeared in a flashback contained in the story "The Controller Lives", from Iron Man # 28 (Aug., 1970).  Here is a pertinent excerpt.  As seen, the elder Stark was named Howard Stark from the beginning. 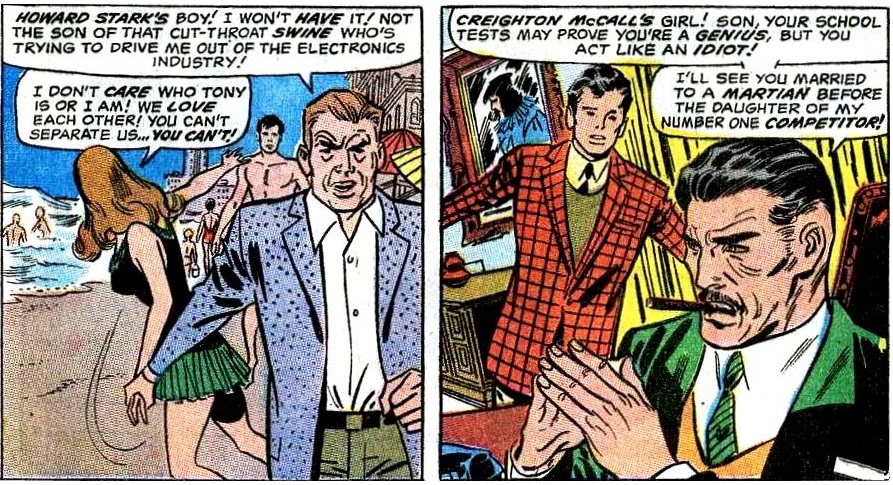 Howard Stark subsequently appeared in (all flashback appearances, of course):

and a host of others.

That explains why I don't remember him. A brief appearance 45 years ago and all the others in comics I didn't buy.

GCD for Iron Man #28 refers to him as Howard Anthony Stark. Presumably the middle name was established later.

Richard Willis replied to Commander Benson's discussion Deck Log Entry # 237 The Silver-Age Challenge---the Cape and Cowl Contest
"Welcome from me, also. Yesterday I tried to post this using my phone and it never made it. Any post…"
10 minutes ago

Dave Palmer replied to Captain Comics's discussion This Week in Comics: June 20-26, 2022
"For an 80s example see Silver Star, and for a 90s example see Bombast."
15 minutes ago

Steve W replied to Steve W's discussion A Cover a Day
"Hi all. George Perez not really my subject. Have had a short break from the thread but missed it…"
30 minutes ago

Richard Willis replied to Steve W's discussion A Cover a Day
"Peter Wrexham said: I notice that Steve W hasn't posted anything since this cover on June…"
34 minutes ago

Rob Staeger (Grodd Mod) replied to Jeff of Earth-J's discussion Dark Shadows
"I guess I was really busy the week before I went on vacation, because I watched several episodes…"
52 minutes ago

Jeff of Earth-J replied to Randy Jackson's discussion Misheard lyrics you prefer to the original
"Regarding pareidolia, I've got a story for you... When I was in college, an evangelical…"
2 hours ago